Strategy Above the Depths

"I think there are certain crimes which the law cannot touch, and which therefore, to some extent, justify private revenge."
- Sherlock Holmes ("The Adventure of Charles Augustus Milverton")

I value the opinion of my fellow brethrens exploring the detective story more than any other and hang onto their recommendations, observations and conclusions like a pile of freshly mined, rough diamonds – before giving them a sharp appraising look myself. That's why you regularly see books emerge here that were mentioned or discuss elsewhere, but even with a positive impression from a fellow devotee and a personal self-control that only exists as a spark of perpetual enthusiasm you have no signed guarantee that the opaque pieces of drift-glass will actually yield a sparkling gem. But what to do when opinions differ? 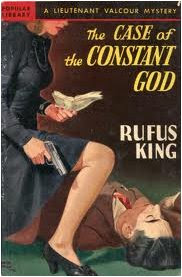 The internet has not been kind in its appraisal of Rufus King's The Case of the Constant God (1938), not as a detective story anyway, noting that it was "unusual downbeat" and "moderately amusing" but also "not quite fair play" and "not much fun to read," while Robert Adey deigned the book worthy of extra praise in Locked Room Murders and Other Impossible crimes (1991) – saying that King appears here as "a writer of the first rank" and expresses his surprise "that he is so comparatively little known." Needless to say, this propelled the book to the upper echelons of my Most Wanted list and I have to admit that having identified the book as a locked room mystery helped in shelling out the bounty for its capture. Besides, would a book with the title Locked Room Murders tell a lie to me? (said he, with the conviction of a raving lunatic).

But enough of this palaver, let's get this show on the road and that's where this unusual case begins for King's series detective, Lieutenant Valcour, where a Mr. Blodgett witnesses a corpse being driven around the city by two men. A routine check on the vehicle, combined with the description of the suspects, identifies them as Artemus Todd and Jonathan Alder, crumbs of the upper crust of the Long Island society, which makes it also an unlikely story. After all, people like that are not in the habit of picking up hitchhikers, let alone ones that need to be dropped off at the morgue, and that's when King puts the plot in reverse and backs up into a flashback.

We learn that the name of the stiff in the backseat was Sigurd Repellen, a nasty blackmailer who dipped his pen in the same venomous inkwell as Charles Augustus Milverton and James Chigwell, morally responsible for the tragic suicide of Jenny Alder – Jonathan’s loving wife and Todd's darling daughter. They accidentally killed him when they threw him against a bust of Emperor Nero and slumped down to the floor. Justifiably homicide? Morally, perhaps, but the family had made plans, conspired and that gives a prosecutor an opening to argue that the outcome would’ve been the same. Ergo, a murder charge. They decide to expunge the evidence, dump the body and lay down until the trails grows cold, but, as we learned from the opening chapter, it's a bust from almost the get go. The first half of the story can be summed up as an inverted mystery, in which we follow both Valcour and the Alder-Todd household as each is taking their measures against one another, but this was the least interesting portion of the book.

The pace was picked up when Repellen's remains were discovered and the medical examiner extracted not only a bullet from the blackguard's heart but also a completely different story. As a final act in this drama we see Alder and Todd taking flight to sea aboard their yacht, while Valcour soared above them in a seaplane before coming down from the sky like a bird of prey. This is my favorite part of the book and offers a nifty, fairly clued impossible problem of a stowaway, whom Valcour believes to be the murderer, but is not found when the boat was turned inside out. As a matter of fact, it was this impossible disappearance from an ocean-bound yacht that saved me from having to put this book away with a lingering sense of disappointment. Plot wise, it was the only part that was done right. The murderer could've been a nice surprise, which, admittedly, was a clever play on the least-likely-suspect gambit, but not enough clues were stowawayed on its pages to pull it off in a satisfactory manner.

All in all, The Case of the Constant God is a readable, offbeat crime novel, but not one that's particular memorable, challenging or engaging.

This was only my second Lieutenant Valcour book, the first being the unconventional Murder by the Clock (1929), but from these I have gotten the impression that Rufus King was sort of a poor man's Ellery Queen – which may explain his neglect. I know there are mystery fans who have an high opinion of King, but I don't see in those two titles.

Note: the post title is a reference to one of the Detective Conan movies, Strategy Above the Depths (2005).
Geplaatst door TomCat on 6/08/2012