Apparently, the year Twenty-Eleven insists on being a year of discoveries. Not since the primordial days of my fandom, when the habit hadn't yet developed to the stage of a chronic addiction, have I sampled so many new and different authors – which is partly to blame for the fluctuation in quality of the books I discuss here. And that bums me out a bit, when only a few months before opening this blog I was reading such classic locked room stories as Alan Green's What a Body! (1949), Anthony Boucher's Nine Times Nine (1940) and Herbert Brean's The Traces of Brillhart (1961).
I guess I can always re-read them, right? *a loud, grumbling protest rises up from my to-be-read pile* Shuddup! you cannot dictate my life any longer! You cannot force me to... what... a-are those t-teeth?!
OK, here's a short review for you to read, while I deal with this situation (if I'm not back before the end of this week, avenge me!):
The Death of a Sham Hangman 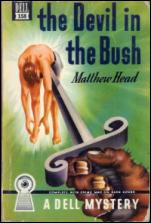 Matthew Head's The Devil in the Bush (1945) starts off with Hooper "Hoop" Taliaferro (pronounced Tolliver), a young professor of botany at an American university, touring the Belgium Congo as part of an economic mission to determine the status of the agricultural stations, and decide which of them are valuable enough to the war effort to receive financial backing from his government. During his wanderings through the infernal region, from Colonial settlements to the more uninhabited spots that lead to the stations, he meets a rugged, scared man with a crooked nose who becomes really chummy and boosts how he once strung up a native who killed a sub-administrator during a brief uprising. But when Hoop tells him he's on his way to inspect the facility of one André de L'andréneau, his friendly demeanor pales and takes off in a hurry, which isn't surprising, as it turns out, he was André and lying through his yellowed stained teeth. The next time Hoop sets eyes on the prevaricatory hangman, after arriving at the station, he's stuffed in a primitive coffin – ready for burial!
The disease he succumbed to, by all appearances, seems normal enough, especially for that region, but the broody atmosphere and relationships of the station people hint at a darker reason for his death. And then there are the blatant lies he told Hoop when he had no idea who he really was.
Among his potential murderers, if it was murder, which dwell the Congo-Ruzi station, are his brother, Gérôme, and his wife Jacqueline, another Belgium couple and their beautiful daughter, who longs to escape from the bush, and the resident botanist Henri Debuc. There's also a medical missionary, Dr. Mary Finney, who possesses a sulphurous tongue and crude manners, who acts as the story's detective. But before she's able to point out the responsible party there will be a second, far more gruesome, death, in which one of them gets his throat cut and the flesh ripped off his back.
Head paints an intriguing, but despairing, picture of life in the Congo, and intertwines it with a clever little detective plot, with a few interesting clues thrown into the mix, however, I felt that some of the story's impact was lost by its length. The plot would've been a lot more tighter, and effective, had it been a novella.
The Devil in the Bush was brought back into circulation by Felony and Mayhem back in 2005, and is still fairly easily obtainable online.
Geplaatst door TomCat on 4/04/2011