Case Closed, volume 38: On the Ropes 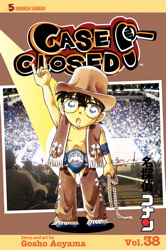 I have decided that reviews of Gohso Aoyama's marvelous Case Closed (a.k.a. Detective Conan) series will become a semi-regular feature on this blog spot. Yes, I know. It's somewhat befuddling and illogical to start smack in the middle of a series, but I have been reading these stories since 2006 – and I didn't have the time to revisit all those foregoing volumes.


But don't let that stop you from discovering this tremendous and imaginative detective series for yourself and try to catch up with me if you can. It's been done! Just take the time to read these notes and this earlier blog entry, so that you know what to expect, and plunge yourself in the vibrant, ever expanding universe of Detective Conan – where high adventure and mystery awaits all who seek it!
The Trap
The first chapter of this book is the conclusion of a case that started in the previous volume, which involved a murdered software developer who had close ties with the elusive criminal organization that's responsible for Conan's precarious situation. However, they appear to be completely unaware of the death of their computer programmer, and Conan decides to bait a trap with the program he was developing for them, but they remain as intangible as ever.
This story provided another compelling plot thread in the ongoing and increasingly more important main storyline, concerning Conan and his wraithlike adversaries.
The Stolen Scroll of the Thunder God
Conan and his buddies of The Junior Detective League lend a helping hand to one of their own in the hope of earning a set of beautiful Festival Dolls for Amy, but at the apartment where the dolls reside also hangs a coveted wall scroll worth a small fortune – and, of course, someone swipes it. This is a fairly clued but minor story in the tradition of Edgar Allan Poe's "The Purloined Letter."
The Man Behind the Mask
Conan, Rachel and her dad, the celebrated sleeping detective, Richard Moore, attend a professional wrestling show where they have an opportunity to meet the star of the company and reigning champion – the famous masked wrestler, Wolf Face. But a backstage rivalry soon leads them to the dressing room of another wrestler, scheduled to face the masked lucha libre in the main event, who was brutally stabbed to death in front of a running camera and the video shows that the perpetrator was none other than Wolf Face!
Conan does an excellent and swift job in deducing who of his fellow in-ring combatants donned one of his masks and done in his opponent – successfully proving that Wolf Face's paws are free of blood and securing his secret identity from the fans and press.
Not a Good Day to be Harley Hartwell
Conan's friend and rival detective, Harley Hartwell, also has a knack for landing himself in tight situations – as he and Kazuha find themselves at the mercy of a ruthless jurist who's trying to force him to decipher a code cooked up by a private detective who has the goods on her. He has to try to keep himself and Kazuha alive while also trying to reach Conan for help. This is more a thriller than a proper mystery, but with the complicated cryptogram worked into the plot an intelligent suspense story would probably be a better qualification.
The stories that make up this volume are a fairly good, if somewhat unexcited, addition to the series, and will not fail to entertain its fans.
Case Closed, volume 39: The Adventure of the Scarlet Blaze is set to be released in mid-July, and I, for one, can't wait to get my greedy hands on it.
Geplaatst door TomCat on 4/21/2011