Back in August, I reviewed The Seiren Island Murder Case from The Kindaichi Case Files and turned out not only to be immensely enjoying, intricately-plotted detective story, but a top 10 candidate for a series best-of list – which encouraged to return to the series before too long. I was already eyeing Demon God Ruins Murder Case when two anonymous comments sold me on it as my next stop in the series. 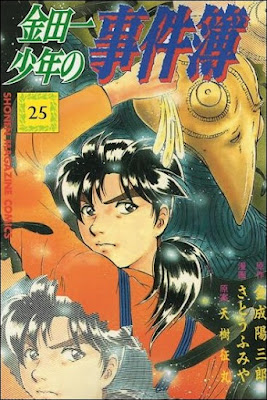 Demon God Ruins Murder Case originally appeared as a serial from March 19 to June 18, 1997, in Weekly Shōnen Magazine and is the 18th case in the first run of The Kindaichi Case Files known as the File Series. That was some cause for concern as the series was being (mainly) written by Yozaburo Kanari at the time. Fortunately, it turned out to be one of Kanari's occasional success stories, but he clearly had no idea how exactly to begin or end the story. More on that ending in a moment.

So the story opens a little chaotically, but the gist is that Hajime Kindaichi needs money and is offered a part-time by another student at Fudou High, Munakata Satsuki. It's an archaeological excavation job at her home village, Majin Village, situated in Izumo, Shimane Prefecture. The Majin Village is not, exactly, a typical village. Firstly, the only entrance to the village is a tunnel cutting through a mountain, which is the only way in and out. Secondly, the village is more of a private estate nestled in a mountain valley with only three houses. The House of Gems, The House of Daggers and The House of Seven Mirrors. There used to be a fourth place, The House of the Copper Bells, but it had burned down years ago. A place with a long, sacred history dating back to the time before Buddhism was brought to Japan, countless ancient artifacts have been excavated in the Majin Village, but the recent excavation attempts to locate four so-called cursed Demon Artifacts – worshiped "as magical items during earlier times." It's believed these Demon Artifacts were dedicated to the deity of curses, Magadori no Mikoto. Whoever "finds all four Demon Artifacts will become rich and famous." And possibly a little cursed.

During the Meiji Era, Satsuki's great-grandfather, Munakata Kichiemon, collected all four artifacts and became very successful, but there was a price to pay. Several family began to die and not from natural causes. So he decided to put the artifacts back to sleep, "burying them back in the ruins of this Majin Village," which is why the family build and moved to the family. The Majin Village is "a sealed village" to suppress "the terrifying powers of the Demon Artifacts" and Satsuki's family have now lived there for generations worshiping the very god that keeps them captive. However, the artifacts have an immeasurable value to the field of archaeology and Munakata Shirou, Satsuki's father and an archaeologist, assembled an excavation team to dig out the ruins. But in the middle or excavation, he died in a cave-in. So now a new attempt is made by the family to find those priceless artifacts.

Hajime Kindaichi, Miyuki Nanase and Saki go to the Majin Village where they find a mixed group of relatives, residents, servants and archaeologists. Firstly, there's Satsuki's aunt, Minatoya Asuka, who lives at the House of Gems with her husband, Minatoya Kanichi. They currently have a house guest, Yamato Takeru, who used to be one of Munakata Shirou two assistants. And he insisted on participating in the next attempt at excavating the historical treasures. Secondly, Edogawa Kenji is a well-known mystery novelist and current owner of the House of Daggers and gave a room to the second ex-assistant, Soga Toyohiro. Thirdly, Kunimori Akihiko, Professor of Archaeology at Tojoh University, who's a former research partner of Munakata Shirou and leads the current excavation party. And he brought along his own assistant, Toribeno Akira. Lastly, there's the household of Satsuki, but her mother has withdrawn from life years ago and now lives with face veiled in the upstairs rooms of the House of Seven Mirrors. So the most prominent characters from the House of Seven Mirrors are Satsuki and the two servants, Muranishi Yayoi and Tsukumo Iyo.

Kindaichi begins his part-time job by helping the archaeologists and the dig is a cave, known as Magadori's Seat, which has an opening sealed by a smooth and shiny stone door – named the mirror rock. There are two semicircular cavities in the mirror rock door that can be used as handles, by two people, to push the door open. One handle is covered with a panel that has a keyhole in it, which can be unlocked and removed. A safety precautionary to keep people away from the dig site. You can probably guess what a creative murderer can do with such a setting. 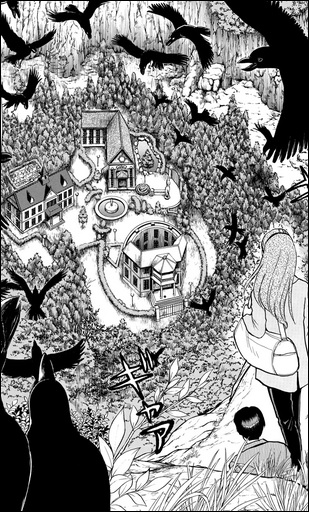 After the first day of work, the mirror rock is moved back into place and locked simply by replacing the panel on one of the cavity-handles. Kindaichi is entrusted to safeguard the key, but soon they discover Yamato Takeru has gone missing. A murder of crows is cawing and pecking away at the cave entrance. So the mirror rock is opened and inside they find Yamato Takeru's body, strangled to death, surrounded by the rotting crow cadavers. There's "no way to open the mirror rock without the key to the second handle" and that makes the stone chamber in Magadori's Seat "a perfectly locked room." This is indeed a really good and original locked room mystery. Not only in presentation! The story provided the problem with two very different, very original solutions to the problem, which are both (technically) correct without one turning out to be a false-solution. And how that works is something you have to find out for yourself. But it worked. My only complaint is that one clue to the second locked room solution really should have been displayed much earlier in the story.

Other than that, the seemingly impossible murder at the dig site would have been enough to carry most detective stories, but the bodycounts in The Kindaichi Case Files almost never stops at just one.

The second death comes as quickly and unexpectedly as it's visually startling and gruesomely presented, but it unfortunately turned out to be nothing more than mere story-dressing with no relevance to the plot. It actually made me feel sorry the character had to die in such a spectacular way for absolutely nothing. If you kill a character in such a way, you have to make it count. Dammit, Kanari! You were so close to being consistent here. A third death in the House of Seven Mirrors introduces a new puzzle to the plot, namely a dying message, as the victim is found tightly clenching pieces of paper – torn pages from a daily wall calendar. Japanese dying messages tend to be language-based and almost never translate very well into another language, which is no different here. This time, I thought the dying message was solvable as the murderer was shown throughout the story either disguised as Magadori no Mikoto (yes, very Scooby Doo) or as a featureless shadow figure, but both times the murderer was coughing blood. I figured the victim could have been aware of this and tried to identify the attacker by pointing out the murderer's days are numbered. Well, I was wrong. The dying message turned out to be a language-based clue after all, but suppose an untranslatable clue is not something I can hold against Kanari. And, to be fair, Kanari held the plot together fairly well.

Demon God Ruins Murder Case is a mostly well-plotted detective story that also include the archaeological search, or rather treasure hunt, to find the lost artifacts. That plot-thread made good use of the floor plan of the House of Seven Mirrors as a clue to the hiding place. However, the key-word here is mostly. Demon God Ruins Murder Case clearly shows the difference between Kanari and his much more talented co-writer, Seimaru Amagi. Kanari not only lacks Amagi's talent as a plotter, but also his confidence as a writer. I already mentioned the messy, almost contrived opening to get the story started, the inconsequential second death and withholding an important clue to the locked room until the last acceptable moment, but he also had no idea how to end the story. You can only interpreted the ending as divine intervention that allowed for a very convenient and happy ending. Nor did I care for that last-minute, feelgood surprise-twist about one of the other characters.

That being said, I can't deny Demon God Ruins Murder Case is among Kanari's better treatments of the series formula. I agree with the anonymous comments that there's "variation and nuance" to familiar tropes, stock motive and cast of characters, but, more than that, I simply found the idea of the double solution to the original locked room situation to be impressive. Never let it be said Kanari was treated unfairly on this blog!

So, while not among the top-tier titles in the series, Demon God Ruins Murder Case stands as a fairly solid, multi-layered and engrossing mystery with a surprising amount of originality and consistency from a writer I normally rate very lowly. There are some weak spots in the storytelling and plotting, but ended up being as pleasantly surprised as when discovering Kanari's The Headless Samurai defied all my expectations by being unaccountably excellent. I actually wanted to end this review with complimenting Amagi for dragging a good locked room mystery out of his writing partner, but I'll stop bashing Kanari now and say he did a good job here.

Anyway, sorry for this messy, rambling review, but cranked it out as it came to me and dumped it. No idea what's next, but probably something Christmas-themed.