The late Edward D. Hoch was a giant during his lifetime as one of the most prolific mystery writers of short stories, which are the bedrock of the genre, and Hoch put nearly a thousand of them to his name – published in such magazines as Famous Detective Stories and Ellery Queen's Mystery Magazine.

A number of popular series characters emerged form these stories, but, arguably, the most memorable and timeless figure from Hoch's cast of detectives is Simon Ark. 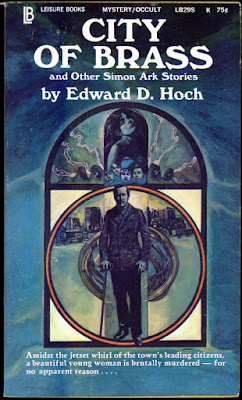 Simon Ark appeared in Hoch's first short story, "Village of the Dead," in 1955 and was characterized over the years as a wandering soul, "searching the world for a long time, perhaps for centuries, in hopes of meeting the devil in combat," who may've been a Coptic priest in the early centuries of Christ – roughly 2000 years ago!

City of Brass and Other Simon Ark Stories (1971) collects one novelette and two short stories, in which Ark detects and vanquishes a variety of evils.

The first story in the collection is the titular novelette, "City of Brass," which originally appeared in the 1959 September issue of The Saint Mystery Library and it reminded me of the Wrightsville stories from the Ellery Queen series.

The place where this short novel takes place, Baine City, is larger and denser populated than Wrightsville, but the flavor was similar due to the plotting being toned down in favor of the (religious) themes with a dash of characterization.

Baine City is an upstate New York town dominated and depended on a single industry: Baine Brass. However, it has made the city a prosperous and peaceful slice of America, which slowly comes to an end when rumors begin to circulate about sinister and unethical experiments at Baine University – carried out by Professor Wilber.

The murder of a graduate student, Cathy Clark, seems to be connected to Wilber's experiments and possible motives and suspects are entwined in all of the social layers of the town. Ark investigates the murder alongside his nameless narrator over a Fourth of July weekend, which comes to a dramatic close at the funeral of the victim.

I don't think the explanation will manage to surprise anyone who's consumed even half the amount of detective fiction that Hoch produced during his lifetime, but the fairness in clueing was appreciated and it was a nice, charming story to read. Once again, I recommend this novelette to fans of the Wrightsville novels by Ellery Queen (e.g. Calamity Town, 1942). 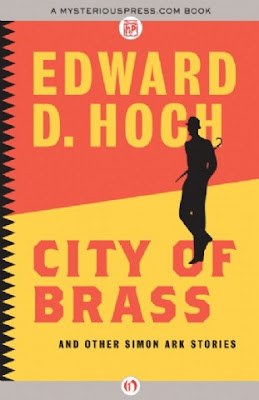 "The Vicar of Hell" is the second story in the collection and was first published in Famous Detective Stories in August of 1956.

The tale is set in London and concerns a lost tome, The Worship of Satan, published in the 17th century, but copies were confiscated and destroyed by the government. The volume discussed two suspicious deaths from 400 years ago, which are the poisoning of James Butler in 1548 and the sudden passing of Sir Francis Bryan – whom Oliver Cromwell once revered to in a letter as the Vicar of Hell.

Three centuries has passed and a copy has resurfaced! However, the person wanting to sell the book was found murdered under circumstances that would draw the envy of the writers of Midsomer Murders: pinned against the wall like a cross with three arrows and pentagram scrawled in blood on the floor.

Simon Ark and the nameless narrator are primarily occupied with tracking down a band of roving Satanists, which gives the story a trashy and pulpy flavor, but the hiding place for the book was genuinely clever and sidestepped the pitfall that usually befalls detective stories involving lost manuscripts – e.g. Edmund Crispin's Love Lies Bleeding (1948) and John Dickson Carr's The Mad Hatter Mystery (1933). I suspect this bit of the story was refurbished as a Nick Velvet story, because it's too perfect not to have used it for one of his thefts.

The final story, "The Hoofs of Satan," was first published in Famous Detective Story in February 1956 and listed in Robert Adey's Locked Room Murders (1991), but it's not an impossible crime story.

Obviously, the inspiration for this story came from an incident from 1855 in East and South Devon, England. A trail of hoof-like marks appeared after a snowfall and ran for miles, which even appeared in normally inaccessible places for none-winged creatures – such as on top of houses, narrow walls and enclosed courtyards and gardens. The hoof-marks in this story never perform any of those incredible feats, but form two lines coming and returning to the nearby woods. There presence is merely strange, but not impossible.

The explanation is well clued and motivated, but hardly original and Hoch lessened some of the effect of revelation by revealing in the opening there would be a murder. That should've been part of the revelation and something the reader could have anticipated based on the hints.

The 1855 incident was discussed in depth in Oddities: A Book of Unexplained Facts (1929) by Rupert T. Gould, which I reviewed here.

So, all in all, a short and decent collection of short stories, but not the best example of Hoch's talent as a mystery writing machine.

On a final note, the next couple of reviews will also be of recent releases and include such writers as Yukito Ayatsuji, Paul Halter and Case Closed.
Geplaatst door TomCat on 7/05/2015