The Hanging Captain (1932) by Henry Wade

So it must be admitted that January has been pretty average so far, quality-wise, having discussed two of Paul Doherty's e-novellas of differing grades, a trio of so-called transitional mysteries from the late 1950s and a compilation of six uncollected short impossible crime stories – of which only two were of good quality. Gosho Aoyama's Case Closed vol. 84 mainly occupied itself with setting up the payoff to several character-arcs in the ongoing storyline in vol. 85. I decided to return to the genre's Golden Age with one of its great, early luminaries.

Wars and held the positions of High Sheriff and Lord Lieutenant of Buckinghamshire during peacetime. The 6th baronet made his greatest contribution to his country when he began writing detective novels and short stories under the name "Henry Wade." Between 1926 and 1957, Wade penned twenty-three novels and short story collection with half of them featuring his series-character, Inspector John Poole. Wade's work is generally highly regarded, "varied in plot and situation" with "a wide, first-hand knowledge of police procedure," which No Friendly Drop (1931), Constable, Guard Thyself! (1934) and Heir Presumptive (1935) can attest to. So why not pick up this month's slack with a novel that was recommended to me as a superb example of Wade's detective fiction? Sure enough, Wade delivered the best detective story (so far) of the month. 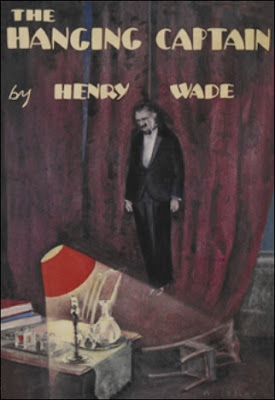 The Hanging Captain (1932) is Wade's sixth detective novel and largely takes place at the ancestral home of Captain Herbert Sterron, Ferris Court, which "had been in the family for no fewer than four hundred years." Captain Sterron inherited the estate when he was a young, dashing and rich Dragoon captain whose successful military career allowed him to capture "beautiful Griselda Hewth in the height of her first, victorious London season" – "sweeping her away from under the guns of rival dukes and diamond merchants." So the future was looking bright for the Sterrons, but then he suddenly resigned his commission and buried himself with his wife at his remote country home. There were plenty of rumors ranging from ill-health, money problem and domestic quarrels. Whatever the reason, Griselda stayed put, "on principle rather than by inclination," even throughout the war when Captain Sterron was deemed unfit for active service and spent the war at remount depot on the French coast.

Gerald Sterron, a retired Shanghai merchant, returned to the England, he found his older brother "utterly changed from the care-free, high-spirited dragoon" and "the Tudor home of twelve generations of Sterrons" in a neglected state. Captain Sterron has made "a complete mess of things financially" with everything tied-up in mortgages and "there's no money to keep things up."

The lingering memory of the First World War (Constable, Guard Thyself!) and the decline of the British upper classes (No Friendly Drop) appear to be recurring themes in Wade's detective fiction. Both are present in the The Hanging Captain, but the war is only a background murmur here with the emphasis being on the decline of estates like Ferris Court ("...what with death duties and the cost of keeping the place up"). Not exactly in a nostalgic way that you might expect from a baronet in the 1930s. To quote Martin Edwards from his 2013 review of The Hanging Captain, Wade was "an aristocrat himself, but although his writing often had a touch of nostalgia, plus a strong respect for tradition, he had no time for people who squandered the advantages life gave them" at "a time when things were tough for millions." So the subject is handled in an unvarnished, matter-of-factually way and provides a double-edged motive when Captain Sterron is found hanging from a curtain rod in his study. Suicide looks obvious, but Superintendent Dawle, of the Hylam Police, keeps an open mind as he observes plenty of possible clues and potential motives suggesting he might have a murder on his hands. Firstly, their next door neighbor and High Sheriff of the county, Sir Carle Venning, has been very intimate with Griselda and that angered her husband – swearing to his brother he'll "break him without touching him." Secondly, Gerald Sterron inherits the family estate, which even in 1932 still counted as a pretty solid motive. However, it's another house guest, Sir James Hamsted, who definitively proves his host had been cleverly murdered during a very well written inquest scene. That discovery poses a problem to the local authorities. 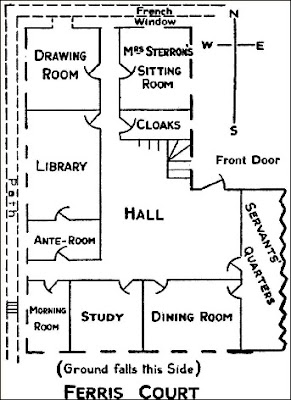 The Chief Constable, Major Threngood, does not relish the thought of having to interrogate the High Sheriff and prefers a hush-hush policy, before deciding to call in Scotland Yard to crack that hard, politically sensitive nut. So the story suddenly begins to indulge in a surprisingly rare, baffling under utilized trope, rivaling detectives, but it's not Inspector John Poole who arrives in Hylam. It's his slightly older rival, Detective-Inspector Lott, who previously appeared in The Dying Alderman (1930) and is expected to one day run neck-to-neck with Poole to the post of a Chief-Inspectorship. And the city detective proved to be a perfect foil for the provincial superintendent.

Detective-Inspector Lott "sedulously cultivated the appearance both of youth and clerkliness" and "with his well-cared-for clothes and the golden chain to his pince-nez would have passed anywhere for the holder of some well-paid clerical post in a Government office." Lott has an exceptional record at the Yard as one successfully closed case followed another. A striking contrast to the plodding and methodical Superintendent Dawle who embodies all the qualities of good, efficient British policing ("there was no brainwork in it, only care, thoroughness and method"). I really liked how they played off each other! Lott comes to Hylam with some preconceived notions as his "experience with county constabularies had led him to expect a fair amount of stupidity," but eventually has to admit to himself that Dawle is "an unselfish old cuss" and "not half such a fool as he looked." Wade deserves praise for giving them only two, equally likely suspects, namely Gerald Sterron and Sir Carle Venning, to investigate and they present a very similar problem – a pair of seemingly unbreakable, cast-iron alibis. Gerald Sterron was playing chess with Sir James Hamsted in the library and Sir Carle was in Birmingham attending a theatrical play, which made it impossible for him "to have been at Ferris at the time that the murder had been committed." So while Dawle goes to work on the chess alibi, Lott tackles the theatrical alibi.

And having only two suspects works better than some might assume. I instinctively jumped on one of them, which immediately made me pause to consider the second option and that's where the story got me. For some time, anyway, but eventually pieced most of it together except for some of the finer details. But what a fun, clever little detective story! Not an Agatha Christie-style rug-pull, of course, but a good how-was-it-done puzzle The only thing that could have made the story and plot even better is if Sir James Hamsted had played armchair detective by proposing a false-solution implicating a third, previously unsuspected person. It would have made for a much more engaging and interesting way to tackle the sub-plot concerning Father Speyd's secret as well as preventing the slackening of the story's pacing during its second-half.

But beside that minor point, The Hanging Captain is a good, solid piece of Golden Age detective fiction, plot-wise, ranking only slightly below Wade's excellent No Friendly Drop and Constable, Guard Thyself. The story earned some bonus points in my book as a superb example of what can be done with two very different, but equally skilled, rivaling detectives. Highly recommended!