Uncage the Black Lizard, Part IV: How Keen Of You!

"It's hard to believe now that I ever thought a locked room could be a place of safety, what with the snakes, the daggers made of ice, the invisible ethers, or unseen electrical currents. A sealed room with four walls, a ceiling and a floor could be the place you meet your end..."
- Miles Jupp

I've passed the halfway mark in the Herculean task of reading The Black Lizard Big Book of Locked-Room Mysteries (2014), edited by Otto Penzler, which is partially due to ignoring the stories I had read before and there were quite a few of those!

Thankfully, the fifth column of stories, How Easily is Murder Discovered, in which "there are so many ways for the creative killer to accomplish the act," were really good. I've even re-read two of the stories to see if they held up and they did. 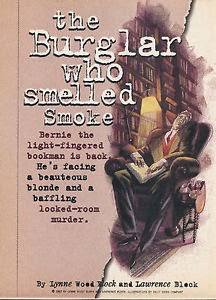 "The Burglar Who Smelled Smoke," by Lawrence Block and Lynne Wood Block, was first published in the Summer/Fall 1997 issue of Mary Higgins Clark's Mystery Magazine and stars Lawrence Block's series-character, Bernie Rhodenbarr – a secondhand bookshop owner and part-time burglar. Rhodenbarr is dropping in on an avaricious collector of mysteries to unload a rare edition of Rex Stout's first Nero Wolfe novel, Fer-de-Lance (1934), which has been inscribed to President Franklin D. Roosevelt, but the collector is found dead before the transaction can be completed. Of course, it happened in a library designed as an impenetrable, fireproof strong room with steel-lined walls and bullet resistant windows to keep the valuable collection as safe as if they were stored in a nuclear bunker. The solution opposing this problem is delightfully simple and more than stood up to re-reading. I think this was the story that put Rex Stout on my radar.

I can also heartily recommend Block's The Burglar Who Traded Ted Williams (1994), in which Rhodenbarr stumbles across a body in a locked bathroom during a burglary, but the entire story was a joy to read. It's another one of those series I should return to.

"The Kestar Diamond Case" by Augustus Muir was first published in Raphael, M.D. (1935) and I assume this is the first recorded case of Dr. Louis Raphael, who can be described as a peculiar cross between Dr. John Thorndyke and Hercule Poirot. I assume from the character introductions this is the first (recorded) case in the series and the first problem for the doctor arose during the robbery of a diamond merchant. A precious stone was lifted from a locked office room, guarded by a plainclothesman, while the only occupant of the office was the loyal, but dead, clerk of the firm. The robbery is set against the backdrop of an underworld rivalry between the Lucian gang and a clever jewel thief, known only as "The Baron," but the doctor's approach is that of calm, reasonable scientist – taking a blood-film of the victim and laying a trap in his laboratory. Not from the top drawer, but still a fun, old-fashioned crime story and glad to have had an opportunity to sample something from an obscure mystery writer like Muir.

"The Odour of Sanctity" by Kate Ellis was originally written for The Mammoth Book of Locked-Room Mysteries and Impossible Crimes (2000) and one of the two stories I re-read, in which a man is seen falling from a window of a locked tower room – to which the only key was in his possession. It becomes even more complicated when it's discovered that the man was stabbed and had been dead long before the fall. The trick to the locked tower room was more involved than I remembered, but it was nonetheless nice to see a modern crime writer successfully taking a swing at the sealed room. 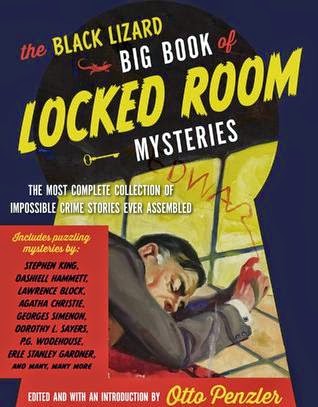 "The Invisible Weapon" by Nicholas Olde was first published in The Incredible Adventures of Rowland Hern (1928) and it's a short-short story with Chestertonian tendencies, but that's an observation that has been made before. The gimmick Olde employed for the murder in the locked and watched ballroom of a castle has passed from a cliché into a joke, but that didn't diminished the quaint charm of the overall story.

Ray Cummings' "The Confession of Rosa Vitelli" was first published in the August 19, 1925 issue of The Sketch and features the Scientific Crime Club, whom came across to me as the precursors of Isaac Asimov's The Black Widowers – except where these guys far more involved. The problem they're dissecting is the inexplicable confession by Rosa Vitalli to the murder of her roommate, Angelina, but refuses to tell how she managed to turn the gas on-and off in their flat – while all the windows, the door and transom were closed from the inside. However, the main draw of the story is not the locked room, but the miracle the Scientific Crime Club perform to make Rosa tell the truth. The playful ideas about time and space. How it can be captured. And that great question: "Where does light go when it goes out?" It showed Cummings was a SciFi-writer and it may have diluted the detective-elements of the story, but I couldn't help but like the story.

"The Locked Room to End Locked Rooms" by Stephen Barr was first published in the August 1965 issue of Ellery Queen's Mystery Magazine and reprinted as "The Locked House" in Best Detective Stories of the Year (1966), but I prefer the title the story was reprinted under here – because it makes a good attempt to keep that promise. The story begins with a discussion about detective fiction and locked room mysteries at one the smallest, but most argumentative, clubs in London, The Regent's, and one point of contention is how locked room mysteries are seldom mysteries. Well, one of the members has an example of a genuine locked room murder without a discernible trace of the perpetrator left on the scene of the crime. The victim is an explorer, Petrus Dander, with ties to the British government and was brutally murdered at his home, which forced White Hall to start covering various tracks to prevent an embarrassing scandal. These include how an axe-wielding killer was able to decapitate Dander and than apparently disappear in a puff of smoke. I've seen a variation on this trick before in a detective series from decades later, but it's still a pretty clever method to escape from a completely sealed premise. Still not sure if this story can be regarded as the ultimate locked mystery, but the attempt has been duly noted.

This was by far the best round of stories in the collection (thus far) and I'll probably be able to finish off this anthology within another four, five posts, but they'll be interspersed with the return of the regular reviews.
Geplaatst door TomCat on 1/12/2015