"Every silver cane has a grubby end..."
- Albert Stroller (Hustle)

Georgiana Ann Randolph was an accomplished and adulated mystery writer under the nom de plume of "Craig Rice," whose booze fueled, madcap shenanigans centering around John J. Malone garnered her the moniker of Queen of the Screwball Mystery, but Rice's standalones and reputedly ghosted novels carved out a reputation for themselves.

Home Sweet Homicide (1944) stands out in Rice's oeuvre as a rare, but truly original, standalone novel and essential reading for everyone who enjoys good fiction – regardless of which genre you prefer. I'm even tempted to say the book transcended the genre. However, Rice wrote more than just that one book and the praise I have seen being heaped on To Catch a Thief (1943), written as if by "Daphne Sanders," secured the title a spot at the top of my wish list. Well, I wasn't disappointed when I finally got around to reading it. 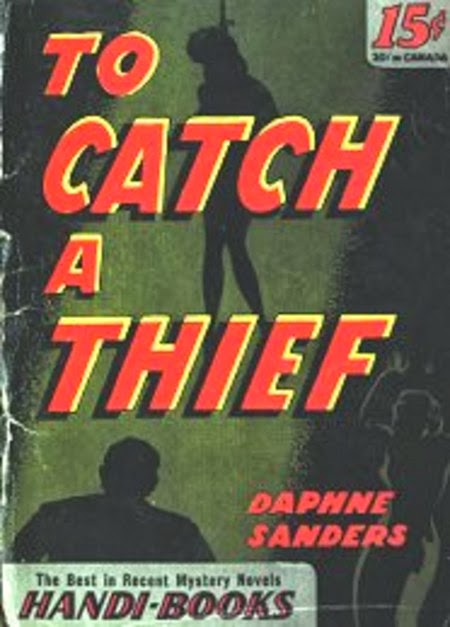 John Moon doubles as protagonist and antagonist in To Catch a Thief, shifting between thievery and snooping around for clues, which makes him ancestor of Lawrence Block's The Burglar Who-series, but relieving Poppy Hymers of a string of emeralds has top priority at the opening of the story – before everything becomes progressively worse. The car they're in crashes and Moon is forced to improvise a kidnapping. Poppy feels isolated from the world and decides to join Moon in his mission. And it's a mission. The story moves to the office of Donovan, a private-investigator, who was hired to investigate a thief targeting a group of seven men and sends them warning notes – signed by a person referring to himself simply as "N." Yes. This aspect of the plot vibrates with V for Vendetta-vibes.

The group formed a syndicate and left a financial massacre in their wake when they crashed the stock market, wiping out a slew of innocent people in the process, which gives Rice an excuse to slip in a bit of social commentary on a situation that's (to say the least) still topical today. Donovan gets to poke around the debris of lives they wrecked, while Poppy's stepmother, Dorothy Hymers, cooks up a plot with her lover, Leon Martelli, to steal her own bracelet and blame it on the mysterious "N" – who's well aware of the plot and stages a double-cross. The double-cross turns into a triple-cross when someone strangles an unconscious Mrs. Hymers after Moon left the house. Like Arsène Lupin in Maurice Leblanc's 813 (1910), Moon spearheads the murder inquiry in which he's one of the suspects and knows his way around a disguise. He even poses as a keen amateur detective to bother and drug the policeman guarding the scene of the crime!

This all makes To Catch a Thief very different in structure from every other Rice novel I have read to date, but you can still identify it as one of her stories because it's covered with one tell-tale marking: her detectives operate as a team. There's Poppy playing Evey to Moon's "V" and Donovan has close ties with Tom Clark of The Gazette and Inspector Garrity of the Homicide Squad. Moon also has semi-official team mates in a former prizefighter and a forger/fixer. There's a Leverage reference hidden in there somewhere.

Moon and Donovan agree on a truce in order to find the murderer of Mrs. Hymers, while suspects go missing and the body count keeps rising, however, the actual question of the book is the identity of John Moon – who could be anyone from a figure in the background story of the financial raiders or even maintaining a third identity.

I love a good roguish tale as much as a well crafted mystery and Rice skillfully guided the plot through the gray area separating the genres, but, surprisingly, the zaniness was toned down quite a bit and you could say this was Rice at her most sober. To Catch a Thief is not an overly serious or drab book, far from it, it's not written in the tipsy, punch-drunk style of the Malone novels. Despite the typical Ricean plot elements, there's a serious, but human, touch to the story and there were a few very well drawn scenes. I liked the book is what I'm trying to say. But then again, Rice seldom disappoints.

Note for the curious: the penname "Daphne Sanders" was the name of a character from The Wrong Murder (1940). If only JDC knew picking a pseudonym could be that easy.
Geplaatst door TomCat on 3/09/2014