I've always been fascinated with detective stories set in either the thick of war, the home-front or among the (societal) wreckage of their aftermath.

Whether it is the sacking of a great city in antiquity (Paul Doherty's A Murder in Thebes, 1998), inexplicable streaks of lights seen on the battlefield of the Great War (Laurance Clark's "Flashlights," 1918), a World War II prisoner-of-war camp (Michael Gilbert's The Danger Within, 1952) or the social malaise of post-war Britain (Christopher Bush's The Case of the Fourth Detective, 1951) – a well-written, war-themed mystery usually makes for an engrossing read. Sometimes having a war in the background can turn an otherwise average detective novel into a noteworthy title (e.g. Franklyn Pell's Hangman's Hill, 1946). 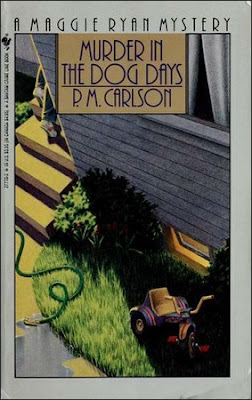 However, the war thorn detective novel seems to have been primarily come from the British and their contributions can fill out an entire bookcase, but our gun-toting, flag-waving American friends are surprisingly unrepresented. I can only think of handful of truly noteworthy examples of traditional, American war-themed mystery novels.

Darwin L. Teilhet's The Talking Sparrow Murders (1934) and Theodore Roscoe's I'll Grind Their Bones (1936) give the reader a visionary preview of the Second World War. Rex Stout wrote two excellent novellas, collected in Not Quite Dead Enough (1944), which are also two of the better World War II detective stories written during that period. Not quite as brilliant as Carter Dickson's Nine-and Death Makes Ten (1940) or Christianna Brand's Green for Danger (1944), but Stout has rarely written and plotted them better. Kip Chase's Murder Most Ingenious (1962) has a plot revolving around three veterans of the Korean War.

So I was intrigued when I came across Murder in the Dog Days (1991) by Patricia Carlson, who writes as P.M. Carlson, which, set in 1975, deals with the personal aftermath of the Vietnam war and the terrors of post-traumatic stress – because official declarations don't end wars for combat veterans. Another thing that attracted me to this book was Tom and Enid Schantz, of the now defunct Rue Morgue Press, praising it as "an ingeniously plotted, fair-play, locked room mystery." You know how I'm when it comes to locked room mysteries and impossible crimes!

Murder in the Dog Days is the sixth title in the Maggie Ryan series and a 1992 Edgar Award nominee/finalist. I think the Maggie Ryan & Family series would be a more apt description.

Maggie is accompanied by her "brawny, balding husband," Nick O'Connor, who's an actor periodically appearing TV commercials, her brother, Jerry Ryan, and his wife, Olivia Kerr – who works as a reporter for The Mosby Sun-Dispatch. They become personally involved when an investigative reporter for the Sun-Dispatch is murdered under seemingly impossible circumstances.

Olivia invited a colleague, Dale Colby, to take his family and come with them to the beach in order to escape the sweltering, August heat, but Dale is working on a plane crash story with political implications. So they only take his wife, Donna, and their two young daughters to the beach. Everything goes splendidly until they returned home and Dale doesn't emerge from his private office-room to greet them, which is bolted on the inside and the gauze-curtained windows were "clamped down." When the door was pried open with a crowbar, they found Dale's twisted body, "splayed on the plaid carpet," with gashes on his face and scalp! 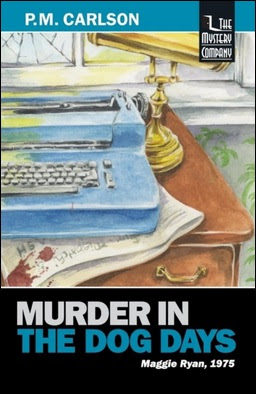 Detective Holly Schreiner is the hard-bitten homicide cop in charge of the case and her back-story is one of the three main plot-strands that make up the plot of Murder in the Dog Days.

Holly Schreiner is an ex-army nurse who served in Vietnam, where she worked twenty-hour shifts in the operating room, but, upon her return home, she found a country hostile towards veterans. She's also haunted by horrifying images of cots filled with dead or moaning bodies, "swathed in blood-soaked bandages," and the throbbing sound of the rotors of helicopters – bringing more wounded or dead soldiers to army hospitals. This is very much a character-driven plot-thread in which Holly has to come to terms with the past and try to make peace with that peacenik, Maggie Ryan. The two other plot-threads concern the locked room murder and the plane crash story.

The plane crash story doesn't really come into play until the second half of the story when the people, who Dale wrote about in his newspaper articles, come under closer scrutiny. Dale had implied in his articles that "the survivors of the five victims were better off now than before the crash" and some of them didn't exactly appreciate his take on their personal situation. However, this is the least interesting part of the plot and primarily serves to provide the story with some excitement towards the end as some of the characters find themselves in a life-or-death situation. I was much more impressed with how the impossible murder in the locked room was handled in this very modern crime novel.

During the first half of the story, the locked room murder is giving some thought and there are even false solution proposed, such as "threads attached to the lamp, trick window frames, or mysterious screeching door wedges," but the eventual solution is pretty clever and original. One of those tricks tailor-made for a specific victim under a particular set of circumstances. Very original and satisfying! On the hand, the clueing, hinting and foreshadowing of the murderer's identity and motive were a bit iffy in key parts, because the brutal severity of the reason behind the murderer still felt like it came out of nowhere – although it was sort of hinted at. Nevertheless, the combination of a modern, character-driven crime novel with a locked room puzzle at its heart pleasantly reminded me of Marcia Muller (The Tree of Death, 1983) and Bill Pronzini (Bones, 1985).

So, all things considered, I've to honestly say not every vintage mystery reader will be able to appreciate the still very modern Murder in the Dog Days, but, if you have a special interest in impossible crime stories or army-themed mysteries, it's a title I can recommend.
Geplaatst door TomCat on 1/24/2020