The Case of the Housekeeper's Hair (1948) by Christopher Bush

The Case of the Housekeeper's Hair (1948) is the 34th title in the ample Ludovic Travers series and one of Christopher Bush's transitional, World War II-themed detective novels in which he slowly began to move away from the elaborate, clockwork-like plots of the 1930s in favor of the American-style private eye format – a transformation that began with The Case of the Murdered Major (1941) and was completed in The Case of the Corner Cottage (1951). A novel reportedly to be a full-blown homage to Dashiell Hammett's The Maltese Falcon (1930), but I'll get to that particular title sometime later this year. 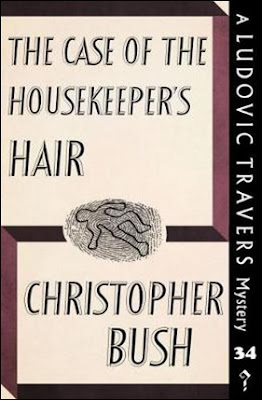 So, for the moment, let's settle down with The Case of the Housekeeper's Hair. A post-World War II mystery with a plot that, in some ways, anticipated Michael Gilbert's Death Has Deep Roots (1951).

The story begins with Travers telling Wharton that has "an idea that a certain man," Guy Pallart, "is going to commit murder." Travers met Pallart at the Regency Club, in London, where he confided to Scotland Yard's special consultant that he intended to perpetrate a morally justifiable murder in "the not too distant future" and Travers promises him, "if it isn't too cold a morning," he'll come and see him hanged – only to be told he hasn't "the faintest intention" of getting himself hanged. Somehow, Travers got the impression he wasn't pulling his leg. This places him in a highly unusual situation.

Travers has to opportunity to find the intended victim of a murder plot and "step in before it actually happens." A murder case in reverse! So he engineers an unexpected meeting with Pallart and easily secured an invitation to have dinner at house, located in "a tiny little spot in Essex," where Travers meets some peculiar characters.

Richard Brace is Pallart's nephew and his last living relative, which is why it was so shocking to his uncle when he discovered he was scrounging together a living by playing in a dance band. Something he's determined to prevent from happening ever again. David Calne is the person who introduced Pallart to Travers and has rented a piece of property from the former where he plans to immerse himself in his hobby of ornithology. Dr. Kales (pronounced Kalesh) is a Czech physician who had to fled Prague, to France, when the Germans marched in and is now staying in England as a guest of Pallart. And then there are the servants, Georges Loret, Susan Beaver and Fred Wilkins, who all have a role to play in the impending drama – such as providing the titular clue. So a very conventional setup to an unconventional, inverted murder case, but a boat trip unexpectedly clears the chess board of all its pieces. And the game has to be restarted.

During a brief excursion to sea on Pallart's steamer, Calne goes overboard and is picked up hours later by the coast guard with an ugly head wound. Only reason he lived to tell the tale is that he came across "a piece of lumber" to cling to. 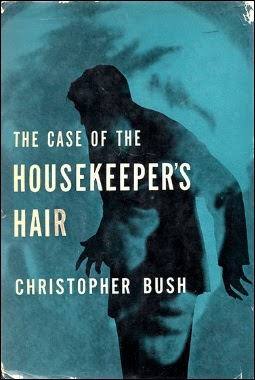 Travers believes Calne's suspicious looking accident could have been the murder that had been foretold, but, a telephone call from the police, summoned him back to the home of Pallatt. A quite unexpected murder had been discovered on the premise and some of the clues point straight towards Travers himself, which forced him to bring Wharton into the case.

Travers and Wharton have to sort the relevant from the irrelevant clues, such as an unkind, but generous, will and the unfortunate mistake the housekeeper made with her hair. But, more interestingly, is the secret meeting that witnessed at the shuttered summer-house between the victim and a blonde, Aryan-looking man. This blonde man was probably one of the German prisoners-of-war who were bused around the countryside to work on farms. You often find references to the post-war malaise in British mystery novels from the late 1940s and early 1950s, but I believe this is the first time I came across a reference to German prisoners being put to work on farms to combat the shortage of agricultural workers. And this elusive German proves to be important cog in the machine of the plot.

The Case of the Housekeeper's Hair is not as tightly, or intricately, plotted as the earlier titles in the series. For example, you can easily spot the murderer, but the story still has a pleasantly puzzling and complex problem to present to the reader. What exactly went wrong with the plan, alluded to by Pallett to Travers, and why? The murderer has one of those pesky, unimpeachable alibis, which was not quite as brilliant as the alibi-tricks from Cut Throat (1932) or The Case of the Missing Minutes (1936), but certainly as daring and original as the one from The Case of the Hanging Rope (1937) – which all neatly tied together with an excellently done back-story. A back-story that had been deeply buried in the wreckage of war-torn France.

So what else is there to say except that The Case of the Housekeeper's Hair is a solidly plotted detective story from Bush's transitional period and provided a good example of how the winds were changing in post-war Britain. Recommended to every fan of Bush, Travers and Wharton!
Geplaatst door TomCat on 1/15/2020