The Case of the Rusted Room (1937) by John Donavan

Nigel Morland was an English editor of periodicals such as Edgar Wallace Mystery Magazine, The Criminologist and Current Crime, but carved out a name for himself in the annals of crime as a highly productive manufacturer of detective, pulp and thriller stories – reputedly churning out an average of 30,000 to 50,000 words a week. Last year, Curt Evans, of The Passing Tramp, shined a spotlight on this now forgotten teller of tall tales in a series of lengthy blog-posts, "The Many Faces of Mr. Morland," "The Many Mysteries of Mr. Morland" and "The Many Fancies of Mr. Morland." 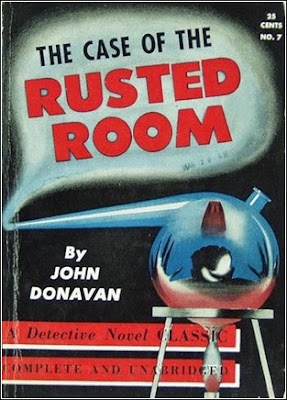 A picture emerged from those blog-posts of a man who had adopted an American-style public persona in order to bolster his profile as a crime writer.

Morland claimed to have been Edgar Wallace's private-secretary, the notorious Dr. Crippen had bounced him on his knee as a child and Sir Arthur Conan Doyle had told him Jack the Ripper was "somewhere in the upper stratum," but there's not a shred of proof for any of these stories. Obviously, Morland wanted people to believe he had a finger on the pulse of the criminal going-ons, real or fictional, in society. Someone you can trust to tell the story as it is.

My curiosity was piqued by Curt's expose and Morland is represented in Robert Adey's Locked Room Murders (1991) with more than one title, but don't worry, this is not going to be another review of some obscure locked room mystery – because something else caught my eye. During the 1930s, Morland wrote a short series of scientific mysteries, published as by "John Donavan," with two additional novels published in 1940 and 1952.

The protagonist of this series is a young, scientifically educated policeman, Sergeant Johnny Lamb, who has been likened by Mike Grost to E.R. Punshon's police detective, Bobby Owen. Sgt. Johnny Lamb is the son of the late Home Office pathologist, Sir David Lamb, who "spirited him away to the library or laboratory" every time his mother's back was turned. Everyone assumed he would follow in his father's footsteps, but "at twenty-two he had revolted" and enlisted as a uniform man. Lamb was determined to earn his stripes on merit, eventually attaining the rank of sergeant, which landed him an assistant spot of one of the big Scotland Yard man, Detective-Inspector Cross. So you can easily see how Grost came to compare Johnny Lamb to Bobby Owen.

The Case of the Rusted Room takes place in a recently erected, red-brick monstrosity of modern architecture, Sion House, which flaunted "an aggressive austerity" that "startled the quiet Victorian dreams of Kensington." One of the tenants of Sion House is an asthmatic hypochondriac and misanthrope, Samuel Wiseman, who's tightfisted with everything except doctors, patent medicines and the latest model of inhalers. 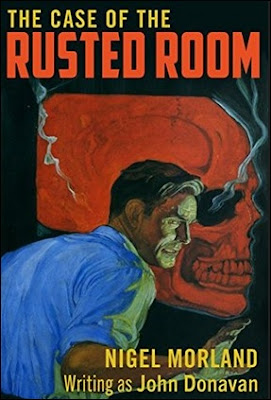 Nonetheless, Wiseman was a gravely ill man and death was always lurking over his shoulder, which is why preferred to sit all day in front "the tightly closed window" and created "mephitic clouds" even the modern devises of Sion House were unable to cope with.

So, when Wiseman croaked during "a violent paroxysm of coughing," the doctor saw no reason to suspect foul play and wanted to sign the death certificate, but one of Wiseman's neighbors insisted on bringing in the police. Miss Prillkins is Wiseman's vigorous neighbor who overheard an argument between him and his ward, Hugh Chandler, who's a chemical engineer in desperate need of four or five thousand pounds to further develop a new process of producing oil from coal – which unceremoniously denied and a heated argument followed. This is enough reason to begin a closer inspection of the body and room, which immediately throw up all kinds of red flags!

A medical examination reveals that the whole of mucous membrane is unnaturally inflamed, apparent caused by some irritant, but there's no trace of "irritant poisons" in the organs! Lamb discovers clusters of "abnormal rusting and fading" of fabric and metal in the room, which comes with a gorgeously drawn diagram of the rusted room with all the spots of rusting/fading marked. These clues tell Lamb how Wiseman had died, but not exactly how it was done and the solution to this problem is a good example of the interest of Golden Age mystery writers in architecture. Add a little science to it and you have a lethal combination.

Scientific nature of Samuel Wiseman's murder and the mechanics behind its achievement brought to mind other so-called nearly perfect murder and how-was-it-done mysteries like W. Stanley Sykes' The Missing Moneylender (1931), Victor MacClure's Death Behind the Door (1933) and the works of the Engineer of Death, John Rhode – e.g. Death in the Tunnel (1936) and Invisible Weapons (1938). I think it goes without saying that the how, rather than the who or why, showed the most ingenuity and constituted the best aspect of the plot. A very clever, inspired idea with its only (minor) weakness that practically everything played right into the murderer's hands. However, this was hardly enough to soil my enjoyment and it was interesting to see how Lamb eroded, what was supposed to be, a perfect crime.

But the how is only one aspect of the crime. Cross and Lamb had to find a person and motive that fitted the ingenious method of the murder.

The murder is properly motivated and was given some thought, but it's still one of those age-old motives. Still, it was not badly done. There are only a handful of suspects: namely the previously mentioned Hugh Chandler and Miss Prillkins, the boorish Brigadier-General Roland Railton-Railton and the quiet, mild-mannered Mr. Charles Nimmo, who live in the same section of Sion House as Prillkins and Wiseman. And a shady financier, Walter Brimsgrove. However, the murderer, while logical considering the motive, was the least inspired aspect of the solution.

All of that being said, I was quit impressed with the overall quality of the plot and story. I didn't expect such a sophisticated, how-was-it-done-style mystery novel with a series-character who could pass as Punshon's Bobby Owen's brother and a scientifically-grounded plot, reminiscent of the Dr. Harry Mason stories by the Radfords, from a writer perhaps best remembered for his lurid, pulp-style thrillers – some of which won't sit well with a modern audience. The Case of the Rusted Room is something else all together! If you can judge the rest of the series by this one, Dean Street Press should seriously consider reprinting all six Sgt. Lamb novels. I think this series would beautifully complement their reprints of Punshon and the Radfords.
Geplaatst door TomCat on 1/21/2020