Robert van Gulik was a Dutch diplomat, sinologist and writer who penned fourteen novels, two novellas and eight short stories about the 7th century Chinese court magistrate, Judge Dee – a fictionalized rendering of the historical magistrate and statesman, Di Renjie. Van Gulik was not the first writer to place the modern detective story among the vestiges of the distant past, but the Judge Dee series was pivotal in popularizing the historical mystery novel. And helped it evolve into a genre of its own. 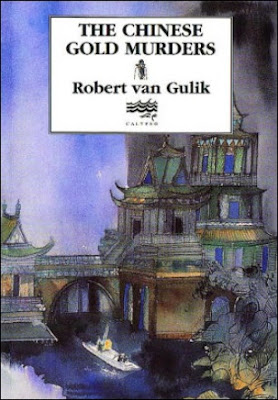 The Chinese Gold Murders (1959) was originally published in Dutch as Fantoom in Foe-lai (Phantom in Foe-lai, 1958) and have always considered it to be the best of the Judge Dee novels. But this judgment dates back to the mid-2000s. So it was time to put my long-held conviction to the test and reread the book to see whether or not the story would hold up. Let's find out!

Set in 663, The Chinese Gold Murders is, chronologically, the first, auspicious steps Judge Dee took in a long, distinguished legal career that began with a humble magistrature and ended in the highest office of the country, Lord Chief Justice of China – recorded in Murder in Canton (1966). Only title in the series I've yet to read. Anyway, The Chinese Gold Murders begins with an vigorous, 34-year-old Judge Dee, who has grown "sick and tired" with "dry-as-dust theorizing and paper work" at the Metropolitan Court. So he requested to be assigned to the vacant post of magistrate of the district of Peng-lai.

Peng-lai is a port city on the northeast coast of Shantung Province. A dismal place of "mist and rain" where, according to the stories, "the dead rise there from their graves" on stormy nights and "strange shapes flit about in the mist." Some even say that "weretigers are still slinking about in the woods." What attracted Judge Dee to this dreary, demon-haunted district is the strange, unsolved murder of his predecessor, Magistrate Wang. An apparently impossible to solve case to the test the mettle of legal mind!

Two weeks before, a house steward reported to the senior scribe, Tang, that the bed of the magistrate had not been slept in and the door to his private library was locked on the inside, but there was no response to the insistent knocking. So the headsman was summoned to break down the door.

What they found inside was the body of the Magistrate Wang, lying on the floor in front of a tea stove, with an empty tea cup near his outstretched right hand that had traces of "the powdered root of the snake tree," but the method of administrating this poison is somewhat of a mystery – because the magistrate had been tea enthusiast with a very particular routine. Magistrate Wang fetched his own water from the well in the garden and boiled it on the stove in the library. The teapot, cups and caddy "valuable antiques" that were locked away in a cupboard under the stove. And the tea leaves in the caddy were not poisoned. So how was the tea in the cup poisoned?

When I read The Chinese Gold Murders in Dutch, I was honestly impressed with both the presentation and explanation of the inexplicable slaying of Magistrate Wang.

At the time, I believed poisonings in locked, or guarded, rooms were very tricky to stage as crimes that appear to be genuinely impossible and difficult to provide such a premise with a satisfying solution, but my locked room reading lacked depth in those days – since then I've come across many innovative takes on the impossible poisoning. One of Van Gulik's literary descendants, Paul Doherty, made the poisoning-in-a-locked-room kind of his specialty, but two excellent examples can be found in the Case Closed/Detective Conan series, "The Loan Shark Murder Case" and "The Poisonous Coffee Case."

So, admittedly, the locked room-trick here is not as impressive the second time around, but still stands as a good, elegant and original solution to genuine locked room mystery. A rarity in Dutch detective fiction! Only problem is the sporadic clueing. There are clues, or hints, an imaginative reader can use to put together a general idea of how the locked room-trick was worked, but don't expect anything along the lines of Christianna Brand or John Dickson Carr. However, the murder in the locked library is merely one of the many major and minor plot-strands that make up the story of The Chinese Gold Murders.

Van Gulik honored the age-old traditions of the Chinese detective story in which the magistrate is at "the same time engaged in the solving of three or more totally different cases." The Chinese Gold Murders is crammed with crimes, danger and intrigue.

A wealthy shipowner, Koo Meng-pin, appears in court during the morning session to report "the prolonged absence" of his wife, Mrs. Koo, who never returned from visiting her father, Tsao Ho-hsien – an eccentric doctor of philosophy. A third case concerns the gruesome discovery of two buried bodies on the property of a farmhouse and a potentially missing third body. There's even a small, quasi-impossible element to this case with three people apparently vanishing into thin air from a stretch of road, but this is still only a fraction of the plot. Judge Dee has an unnerving encounter with the ghost of Magistrate Wang in the courthouse and stories are told of "a headless monk slinking about" an old, abandoned temple. A weretiger is terrorizing the district, smugglers active, shady businesses are being conducted aboard floating brothels, an ever-present Korean element, murderous attempts on officials and a bit of sword play! 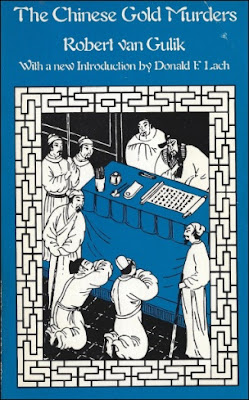 I believe the sword play here deserves a special mention. The story begins with Judge Dee traveling, on horseback, to Peng-lai with his right-hand man, Sergeant Hoong, but they're waylaid by two "brothers of the green wood," Hoong Liang and Chiao Tai. A group of outlaws whose code is to only rob officials and wealthy people. They known to help people in distress and have a reputation for courage and chivalry. Judge Dee engages them with his legendary family heirloom, Rain Dragon, the Excalibur of the Orient, which was a nicely done nod at the Robin Hood lore. There's even a touch of the Arthurian legends in the back-story of the sword!

So, while The Chinese Gold Murders didn't quite shine with the same radiant brilliance on my second read, but regardless, I tremendously enjoyed revisiting the story.

Van Gulik never allowed his readers to be bored for even a single page by packing the plot, cover to cover, but held a firm grip on the various plot-threads throughout the story and tied them all together in orderly fashion by the end – of which the locked room murder is the best realized strand of the plot. There are, however, two elements of the large, overarching solution breaking two cardinal rules of the Golden Age detective story, but they were very well done. And even Carr broke one of those two rules. But, perhaps the best thing about this series, is Van Gulik's world-building skillfully merging history and fiction. I can see how the Judge Dee series helped to legitimize the historical mystery as a (sub) genre.

Long story short, The Chinese Gold Murders is not exactly the masterpiece I remembered from my first reading, but it's still an excellent and recommendable historical detective novel.
Geplaatst door TomCat on 1/17/2020