Henning Nelms was an American magician and authored a trickster's manual, entitled Magic and Showmanship: A Handbook for Conjurers (1969), but more importantly, he penned two memorable examples of the locked room mystery novel, The Hangman's Handyman (1942) and Rim of the Pit (1944) – published as by "Hake Talbot." Two very popular novels among devotees of the impossible crime tale. 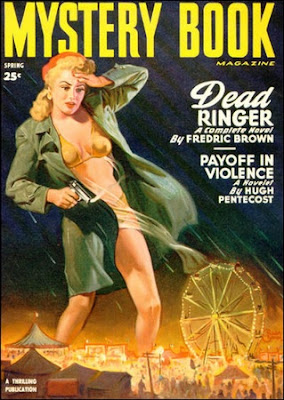 Robert Adey praised Talbot in Locked Room Murders (1991) as the only mystery writer to "successfully emulate" John Dickson Carr and Clayton Rawson. A writer who combined "Carr's flair for atmosphere and the bizarre" with "Rawson's magical tricks," which endeared the books to the avid locked room reader. Not as well remembered are Talbot's two short stories.

"The Other Side" was never sold during Talbot's lifetime and remained unpublished until it was included in Murder Impossible: An Extravaganza of Miraculous Murders, Fantastic Felonies and Incredible Criminals (1990), but Jack Adrian frustratingly noted in the introduction Talbot wrote numerous short stories featuring his professional gambler and ex-convict, Rogan Kincaid – which also remained unsold and where either destroyed or lost! A similar, horrifying fate befell the third, full-length Rogan Kincaid novel, The Affair of the Half-Witness. There is, however, a second story that made it into print long before "The Other Side." It's just a little bit more difficult to find.

As far as I know, "The High House" has only appeared in the Spring, 1948, issue of the Mystery Book Magazine and nowhere else. Not in English anyway.

"The High House" begins, as you would expect from Talbot, with a dark, brooding story of a deadly, century-old curse that lies upon the house of a seafaring family. Back in the 1800s, Captain Thomas Danvers made "a voyage to the Spice Islands" and brought back a handful of natives, a father and four sons, who erected the family mansion. This explains why "the house spoke imperceptibly yet insistently of Oceania." Captain Danvers promised the natives to take them back home on his voyage, but the promise was rescinded when he got into the European trade. So the old native placed a curse on the family home and then, together with his sons, flung themselves into eternity from the captain's walk on the roof.

A curse promising that if "the heads of the Danvers family ever gave up the sea" to settle down in the ancestral seat, "the house would kill them" until "it had taken life for life" and it has lived up to its promise – killing three men over a hundred-year period. So this brings us to the present-day and the elderly, dying Admiral Nat Danvers has returned to the family home.

There are four more people in the house on that fateful evening: Everett Danvers is Uncle Nat's last living relative and the house is being manned by the son of the old Danvers' housekeeper, Steve Phelps. Anne Corwin is Everett's love interest and she brought along that adventurous-minded detective, Rogan Kincaid, who is asked by her "to lift the Doom of the Danvers from Everett." Unfortunately, Kincaid's presence is unable to prevent the Old Admiral falling to his doom from the captain's walk when he was all alone on the roof-top. Or so it appears!

However, "The High House" suffers from the same problem as "The Other Side" in that the premise was better than its ending with a solution lacking the ingenuity of the locked room-tricks from the novels. Another problem here, unlike in "The Other Side," is that the fall from the roof-top is never really presented as an impossible crime, because Talbot never showed why it should be considered a locked room murder of sorts. Something weakening a solution that already some dodgy parts in it.

The premise of "The High House" perfectly demonstrates why Talbot is always compared with Carr, eerily bringing together the lore of the sea with the superstition originating from a far-flung island, but the execution of the plot shows the short story format was not suited for Talbot's talents – who obviously needed a novel-length canvass to work his magic on. Regardless, I'm still grateful to have been able to judge this story for myself and many thanks to a certain person who kindly provided me with a copy.
Geplaatst door TomCat on 1/23/2020