The Case of the Hanging Rope (1937) by Christopher Bush

Christopher Bush's The Case of the Hanging Rope (1937) is the seventeenth detective novel in the Ludovic Travers and Superintendent Wharton series, rechristened as The Wedding Night Murder in US., which was published during what some consider to be a vintage year for the genre – a golden year, of the golden decade, of the Golden Age. A fine year with an excellent harvest of detective stories. Some of them are still considered classic masterpieces today. 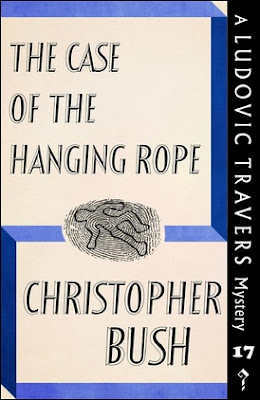 So where does Bush's The Case of the Hanging Rope exactly stand in this illustrious class of '37? Well, let's find out!

Sonia Vorge is an Anglo-Russian aviatrix, like Amelia Earhart, who was driving race cars at eighteen, "picking up prizes at Brooklands," before she started competing in "the international circuits and holding her own against men," but, during an Alpine race, she wrecked her car – killing her friend and passenger, Irene Carne. Sonia escaped with a broken arm and smashed ribs. After her stint as a female dare-devil of the race track, she picked up parachuting, gliding and finally long-distance flying.

A second tragedy happens when Sonia crashes her plane in the Austrian Alps and her co-pilot, Maurice Trove, damaged his legs and is unable to walk. So she went looking for help, but she wandered around for two days until by "sheer bling, blazing luck" stumbling across a forester. The wreck and Trove's body were never found, but rumors of "reliable evidence" of Trove's survival have begun to circulate. A man claimed to have seen Trove in Odessa, Russia, three months after the plane crash. Even the newspaper headlines are now boldly asking the question "IS MAURICE TROVE STILL ALIVE?"

These rumors and public speculations begin on the eve of her marriage to a well-known theatrical producer, Sidley Cordovan, who had broken off his initial engagement to Sonia. Cordovan had "some pretty hard things" to say about his former fiance, but they became reengaged in the wake of the plane crash.

Sidley and Sonia have a modest wedding ceremony at a London registry office with Ludovic Travers, an acquaintance of Sonia, acting as one of the witnesses.

When Travers congratulates the newlywed Sonia, she invites him to have lunch with him the following day and promises with "a sardonic delight" that he won't be bored, but why delay their honeymoon for a casual lunch? The day had been heavy with portent. Early next morning, Travers is called out of bed, by Wharton, with the news that Sonia Vorge had been murdered at Montage Court – where they had been spending their wedding night. Sonia was stabbed to death in her bridal bed and Sidley was found in the next room, drugged and dazed, with a noose of stout linen-line hanging from a cross-beam. A poor attempt by the murderer to disguise the crime as a botched murder/suicide.
A salient detail is that the elderly caretaker, Coales, claims to have seen the foreboding "apparition" of the Lame Monk of Montage, "quite a well-known ghost," on the night of the murder. Travers would probably have believed Coales had he seen the ghost on any other night, but not on that specific night.

Travers and Wharton begin to delve into the backgrounds of everyone involved, which brings Wharton to France to talk with the eccentric owner of Montage Court, Sir Raphael Breye, who left England to live as a recluse in the south of France with his vast collection of paintings. This charming little excursion to France shows why Wharton has become my favorite Golden Age policeman. Meanwhile, Travers is doing what he does best: testing the soundness of everyone's alibis. 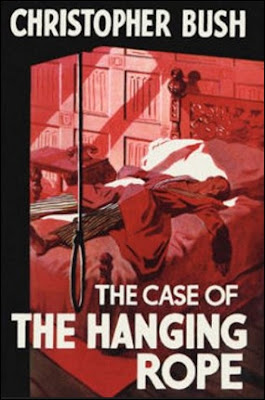 Some of the alibis aren't only cast-iron, they appear to be made of hand-wrought steel, but "hand-wrought may be home-made" and they've demolished seemingly unbreakable alibis before. Travers gives a practical demonstration on how to make a homely alibi. However, the murderer's alibi-trick is something different altogether.

Bush's best and most successful alibi stories either have minutely-timed, clockwork-like plots (The Case of the Missing Minutes, 1936) or were carefully staged tricks (The Case of the Murdered Major, 1941), but here the murderer's unshakable alibi relayed on something unpredictable – which could have rendered the alibi completely useless. Sure, the murderer had an excuse to explain this unpredictable element, but it would still left this person without an alibi. Still, the idea behind the alibi-trick is original and possibly unique. Only problem is that it's a risky method to use in a crime that can get you hanged. Murderer was really lucky it worked exactly as planned.

The explanation as to who murdered Sonia, drugged Sidley and why there was a rope hanging from a cross-beam formed an interesting play on the tightly-linked, closely-timed double murder puzzles Bush specialized in before World War II. Dead Man Twice (1930), Dancing Death (1931) and The Case of the April Fools (1933) are great examples of them, but the multiple, interacting plot-threads of The Case of the Hanging Rope were loosely tied together. Something that would have been less of a problem, if the murderer had a stronger motive and the characterization had been better. There were only three convincing characters, besides Travers and Wharton, which is why I didn't go over the list of suspects. They were mostly colorless.

Unfortunately, these shortcomings prevented The Case of the Hanging Rope from securing a spot in the top-rank in Bush's oeuvre, but I can still recommend it to his loyal readers as a good, but loosely plotted, entry in the series with an insanely original alibi-trick. And if you specifically like detective stories that center on destroying alibis, you have to read The Case of the Hanging Rope, because this one doesn't rely on screwing with people's perception of space and/or time.

My last few excursions into this series haven't exactly been as successful as my earlier ones. So my next read from Dean Street Press is probably going to be return to always wonderful E.R. Punshon.
Geplaatst door TomCat on 8/20/2019