Gerald Tomlinson was an American school teacher, a full-time freelance writer and a consulting specialist in the field of education, who has edited many high-school grammar and composition textbooks, but, during the 1970s, Tomlinson began to write short detective stories – printed in such publications as Alfred Hitchcock's Mystery Magazine, Ellery Queen's Mystery Magazine and Mike Shayne Mystery Magazine. One story in particular attracted my attention. 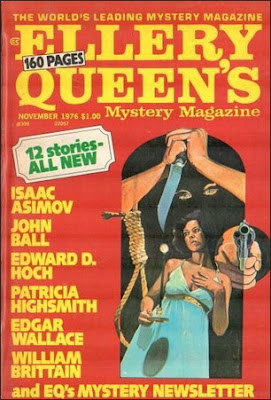 "The K-Bar-D Murders" was originally published in the November, 1976, issue of EQMM and reprinted in the anthology Ellery Queen's Masters of Mystery (1987).

On his informative and detailed website, "A Guide to Classic Mystery and Detection," Mike Grost briefly discusses Tomlinson's "The K-Bar-D Murders," which is where I learned of the story. Grost described "The K-Bar-D Murders" as "a brief but well done detective story" packed with as much details as possible about the characters, murders, sociological background and a plot with surrealistic touches – one of several points linking the story to the work of Ellery Queen. This sounded promising enough to place the story near the top of my short story to-be-read list.

Robert Ollinger is a notorious syndicated newspaper columnist, whose column, Capitol Hot Line, ran "in 112 newspapers from Maine to California" and a quarter of a century of investigative reporting had left "a host of enemies in his wake." The terrible "price of telling the truth." Some have even tried to kill him.

However, Ollinger not only has enemies everywhere, but also paid informants and "electronic bugs." So there's always a hot tip, somewhere, down the pipeline.

When the story opens, Ollinger gets a rambling phone call from someone identifying himself as Mr. Napoleon Bonaparte from Honotassa, New Mexico, who tells him a guy by the name Poindexter is responsible for "the branding-iron jobs." A case referred to by the newspapers as the K-Bar-D murders. Someone has shot and killed four men, in four different states, after which he brands their foreheads with a branding-iron from the K-Bar-D ranch, but there are two problems – such a ranch never existed and the victim's don't have a thing in common. They didn't "serve on the same jury, or fight in the same platoon in World War Two, or take the same plane from Dulles to O'Hare, or receive the same coded message from Hong Kong."

Mr. Napoleon Bonaparte warns Poindexter is moving east and is going to kill the hard-nosed columnist, because he's so well-known Poindexter isn't likely to go through "a dozen phone books to find some other Robert Ollinger." So what does this mean? Ollinger orders one of his personal investigators, Mort Bell, to deliver him the K-Bar-D killer or else he can find himself another job!

The plot comprises of two mini-puzzles: finding the obscure link that chains the victim's together and the meaning of the K-Bar-D brands on their foreheads, which functions here as a dying message of sorts. The murderer is "a trigger-happy psychopath" who never appears in the story and is captured off-page by Bell. And this ending exposes the story's main weakness. It's too short.

Tomlinson crammed too much material in too short a story. The characters, premise and plot ideas were all excellent, but the story was too short to do them any kind of justice and should really have been expanded into a full-length, Golden Age-style serial killer novel – similar to Arthur W. Upfield's Winds of Evil (1937) and Ellery Queen's Cat of Many Tails (1949). So what we're left with is a story full of good and promising ideas, but the short story format prevented Tomlinson to develop those ideas further and deliver on their promise. You can't help but feel that a good mystery novel was wasted on this short story. All of that being said, "The K-Bar-D Murders" still makes for interesting detective story. What it does, it does well. So there's that.

Yes, my next post is going to be my long overdue return to Bill Pronzini and Marcia Muller's historical Carpenter & Quincannon series.
Geplaatst door TomCat on 8/13/2019