Several months ago, I read two detective novels by the prolific "Gerald Verner," a penname of John R.S. Pringle, of which the Paul Halter-like homage to John Dickson Carr, Sorcerer's House (1956), encouraged me to delve deeper into his work – which brought me to Terror Tower (1935). A pulp-style take on the quintessential English village mystery. 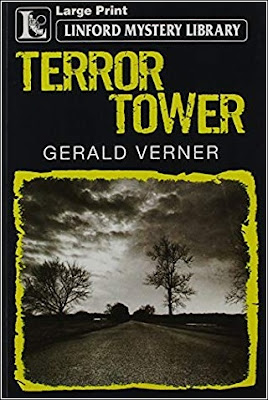 Terror Tower is set in a little place named Stonehurst, an old-world village on the Kentish coast, where the building plans for a factory in the middle of the village has split the community in two groups. On the one hand, you have the villagers who believe a factory will turn Stonehurst from "a village to a prosperous town." On the other hand, you have "the more conservative members of the community" who wish to preserve the village for themselves. And they have a majority vote.

John Tarley is the leading voice of this conservative faction and proposes to raise the money to pay for the several acres of land that was mortgaged by the now late owner, Owen Winslow, but five thousand pounds is more than "the village could rake up in a century." So they decide to make an appeal to the new owner of the village and the ancient Greytower, Jim Winslow, Old Winslow's nephew.

Greytower was "an ancient creeper-covered building," originally an old fort, "standing in its own well-wooded grounds in the centre of the village" and was expanded with a left-hand wing in 1890s – where Owen Winslow lived as a recluse. Jim Winslow inherited the place from his uncle and arrived in the village with a friend in tow, Ian McWraith, but almost immediately they got a taste of the "atmosphere of terror" which brooded over the whole place. Greytower is run by a butler and housekeeper, a Mr. and Mrs. North, who act very suspiciously. There's a mysterious, solidly locked door underneath the spiral staircase that can't be opened, because they have no idea what happened to the key. McWraith's nightcap is doctored with a sleeping drought. Winslow witnesses from his bedroom window how a shadowy figure pushes around a wheeled-ambulance with the body of a man on it!

On the following morning, the body of a stranger is found at the cross-roads just outside the village a bullet in his head. And this is not the only problem that has attracted the attention of Scotland Yard.

Over a two year period, a number of police-detectives have disappeared within the vicinity of Stonehurst and the last disappearance occurred only three weeks ago. So the Yard puts one of their best man on the case, Inspector Shadgold, who immediately turned to his talented friend, Trevor Lowe – a dramatist and amateur criminologist. Lowe opened strongly, in the third chapter, as he critiqued and sniffed savagely at the "so-called psychological novels."

His secretary, Arnold White, asks Lowe about the book he has been reading and answers that there isn't "a solitary character in it who isn't cross and nasty." They all have "kinks of some sort or another." These characters spend pages analyzing themselves "to find out what they are" and "pages more to find out why they've got them!" 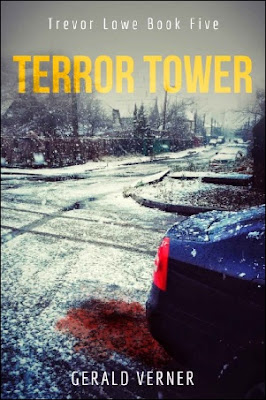 A pernicious type of literature that only "portrays a crumb" of the world as a whole, because the world is made up of mostly of decent, hardworking people who are too busy earning a living to inhibitions. Lowe shudders to think the effect such dreary books have on people who are just reaching adolescence. Young men and women who dig down into their subconscious to try discovering "things that don't exist" and have their minds poisoned by "a long dose of this 'nothing-is-worth-while' creed." It teaches self-analysis in the wrong way. Hear, hear! Go to Hell with your drab, mundane realism! I want ingeniously constructed, labyrinthine plots full of danger, romance and murder! I want hansom cabs rattling through the London fog and a track of footprints in the snow that impossibly end in the middle of an open clearing! Give me the Great Detectives of yore!

Yeah, in spite of some of his shortcomings as a plotter and storyteller, I'm beginning to warm to Verner.

Somewhere around the halfway mark of the story, Terror Tower slowly changes from a, more or less, conventional village mystery into an old-timely, dime thriller complete with gangsters, but first, the reader is treated to a classic cliché and trope of the traditional detective story – courtesy of a murderer with a good sense for dramatic timing. One of the suspects is about to sing like a canary, but is shot in front of the detectives by a murderer who makes a successful escape. A second suspect is poisoned in a locked and bolted bedroom, but the impossible crime was only a very minor aspect of the plot. However, the solution made me wonder what Agatha Christie could have done with this idea for a locked room poisoning. There was something about the trick that fitted her work like a glove.

Sherlock Holmes stated in A Study in Scarlet (1887) that, criminally, "there's nothing new under the sun" and that "it has all been done before," but the central plot-idea that emerged when Terror Tower turned into a thriller struck me as completely original. I'm not as familiar with these dime thrillers as with the classic detective story, but the overarching scheme of the villains seemed pretty original to me. There was even a touch, or suggestion, of the horror story when that evil scheme began to emerge and take shape. A slightly better writer might have gotten more out of the idea, but Terror Tower was an entertaining, old-timely gangster thriller, fraught with danger, presented as a village mystery. And I appreciated the bits of foreshadowing.

So, all things considered, Terror Tower can hardly be labeled as one of the greatest pieces of crime fiction from the genre's Golden Age, but still made for a good read with an exciting ending and perhaps a truly original idea at the heart of the plot – neatly tied to the missing policemen and (locked room) murders. Yeah, I'm now convinced I have found my next John Russell Fearn.
Geplaatst door TomCat on 8/23/2019