The Flimflam Affair (2019) by Bill Pronzini

The Flimflam Affair (2019) is the seventh, full-length historical mystery novel in the John Quincannon and Sabina Carpenter series, a pair of private-investigators from San Francisco of the 1890s, which were originally penned by the husband-and-wife writing tandem of Bill Pronzini and Marcia Muller – a collaboration that ended with The Dangerous Ladies Affair (2017). Pronzini has continued the series on his own beginning with The Bags of Tricks Affair (2018). 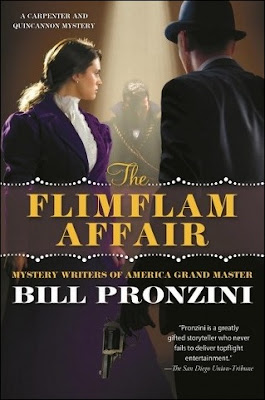 On a side note, three years ago, I reviewed The Plague of Thieves Affair (2016) under the blog-title "A Stuffed Bag of Tricks" and this made me assume I had already read The Bags of Tricks Affair. Yes, I'm an imbecile.

The plot of The Flamflim Affair is an amalgamation of two short stories originally published in Ellery Queen's Mystery Magazine, "Medium Rare" (1998) and "Burglarproof" (2010), expanded with two personal plot-threads concerning John Quincannon and Sabina Carpenter. Their relationship had been "strictly professional," but Quincannon has been spending the past five years convincing Sabina that his intentions were honorable and has "finally worn down her resistance" – admitting to herself that John was more than just a business partner and friend. A second plot-thread brings back a ghost from the past, but first, they have to clear up two cases that were brought to Carpenter & Quincannon: Professional Detective Services.

Sierra Railway Company has engaged Quincannon to track down "a considerable sum" in gold dust and bullion, stolen from the express office of the Tuttletown depot, but the audacious thieves didn't simply crack the safe. Oh, no! They carried off "a four-hundred-pound burglarproof safe," filled with gold, in the middle of the night. A dairy farmer finds the opened and looted safe in a field, but this discovery turned a burglary into an impossible problem.

The black, circular door of the safe was partially detached, hanging by "a single bolt from a bent hinge," showing "the door had clearly been forced somehow," but there are no powder marks or other evidence of explosives having been used – which makes this a highly unusual impossible crime. Quincannon demonstrates here why he thinks he's "the best detective west of the Mississippi" as he follows such clues as blood, dried putty, a piece of straw and the cold, damp interior of the safe to the doorstep of the culprits.

However, the best part of Quincannon's case is undeniably the method the thieves employed to wrench open a reputedly burglarproof safe. Something you normally would expect to find in a scientific impossible crime story by Arthur Porges.

Sabina Carpenter receives an assignment from a rich investment broker, Winthrop Buckley, whose daughter was "a childhood victim of diphtheria," but his wife, Margaret, has never been able to accept her death. Margaret believes she can "obtain an audience" with the ghost of their daughter, Bernice, with the help of Professor Abraham Vargas of the Unified College of the Attuned Impulses. Buckley is a skeptic and believes Vargas to be a fraud, but he needs hard, cast-iron evidence in order to convince his wife. Sabina goes undercover as "Dorothy Milford" with a fabricated story about a dead brother and discovers Vargas to be "a philandering flimflammer" who "preys on vulnerable women" and grieving families, which is painfully demonstrated during the fatal séance when he manufactured the disembodied voice of Bernice – making her grief-stricken mommy and daddy promise to come again. Vargas more than deserved to have that ornamental dagger shoved down his neck.

This is exactly what happened in the pitch-black séance room: Vargas is stabbed from behind, twice, while everyone around the table was holding hands and the only door was locked from the inside. The locked room-trick here is the proverbial mixed bag of tricks. I appreciated how much of the trick was tied to the tools of the trade of fraudulent mediums, but disliked how the murderer managed to get pass the locked door, which is something of a cheat. Still a good example of the murder-during-a-seance locked room mystery.

The problems posed by Vargas takes up the lion's share of The Flimflim Affair, as Quincannon only needed five chapters to bring the burglary case to an end, but the murder of Vargas is solved with ten chapters left to go.

This portion of the story concerns "a notorious counterfeiter," Long Dick Darrow, who had a fatal encounter with Quincannon during his tenure as an operative of the Secret Service. But he appears to have risen from his watery grave and has brought his distinctive counterfeit one-hundred dollar bills back into circulation. I didn't really care about this last plot-thread and felt tacked on to the plot in order to pad out the book to a novel-length story.


The Flimflam Affair is a patchwork mystery novel of old and new material, which can make the story feel a little disjointed at times, but on a whole, it was vast improvement over the very minor The Plague of Thieves Affair and the overtly political The Dangerous Ladies Affair (2017) – hearkening back (quality-wise) to the earlier The Bughouse Affair (2013) and The Spook Lights Affair (2013).

The next entry in this series, The Stolen Gold Affair (2020), is scheduled for next year and has the best cover-art of the whole series! I hope it means we'll be getting an impossible crime inside a sealed mine shaft.
Geplaatst door TomCat on 8/16/2019