Major Mason Wright was a public relations officer to General Joseph W. Stillwell during the Second World War and later became the head of the Armed Forces Radio Services in Hollywood. I found a brief reference to Major Mason Wright, of the Army signal corps, in the May 10, 1941, issue of Motion Picture Herald expressing "official appreciation" from the War Department for "the production of service training films" – only here the trail grew cold. This represents nearly all the internet was able to tell me about this obscure, long-forgotten army major. 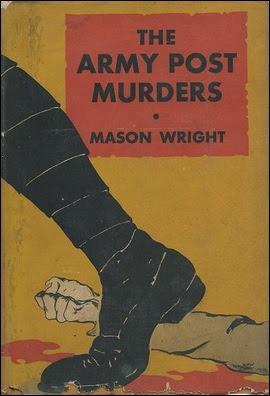 Murder on Polopel (1929) was co-written with William R. Kane, a magazine and journal editor, which was reprinted in the May, 1934, issue of Star Novels Magazine, but I'll be taking a look at his second novel. The intriguingly-titled The Army Post Murders (1931), originally published in the February, 1931, issue of Excitement, which I accidentally stumbled across when looking for army-themed, Golden Age mystery novels – a search inspired by George Limnelius' The Medbury Fort Murder (1929). Surprisingly, The Army Post Murders turned out to be a (minor) locked room mystery as well.

The Army Post Murders has a premise that's somewhat similar to The Medbury Fort Murder: a murder on "a military reservation in time of peace" deeply entrenched in the private lives of the military characters and their families. This makes them a little different in tone compared to the army-themed detective novels from the Second World War (e.g. Christopher Bush's The Case of the Murdered Major (1941) and Franklyn Pell's Hangman's Hill, 1946).

The backdrop of The Army Post Murders is the historical Fort Comanche, built in 1869 as one of "the first of the permanent frontier garrisons," on the prairie grasslands of Oklahoma. A remote, out-of-the-way army post where the monotonous, humdrum army existence has played havoc with the mental state of Captain Harland "Hal" Baldwin's wife, Dorothy.

Dorothy "Dot" Baldwin has become overly emotional, easily irritated and prone to violent temper tantrums. She has started running up the bills, complains constantly and has set the fort ablaze with rumors of an affair between her and the commending officer of the 15th Field Artillery, Colonel Martin Kalendar – a character as tailor-made to be murdered as Lieutenant Charles Lepean from The Medbury Fort Murder. And with a name like that, you knew his days were numbered the moment he showed up!

Dot and Hal had planned on a dinner party with their friends, Captain Jerrold "Jerry" Costain and his wife, Minna, but Colonel Kalendar turns up claiming to have been invited by Dot. She says this is not the case and Hal urges her to get rid of him. 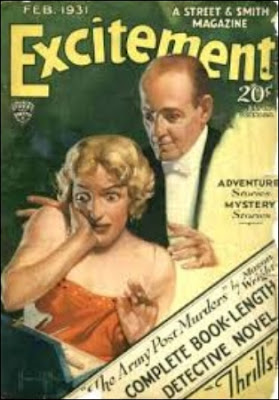 After the turmoil of his unannounced visit, Colonel Kalendar is found sitting next to the table in the middle of the Baldwin's living room pinned to his chair by a large carving knife! General Alonzo Phipps is informed, but, when they return with him, "the body of Colonel Kalendar had disappeared." A problem with the appearance of a quasi-impossible crime, but nothing to get excited about. So, confronted with a murder and a body that has been spirited away, General Phipps asks the United States District Attorney to send down Jimmie Boodler – a special investigator from Washington. Boodler is a pleasantly active, but bland, detective-character with a slight hint of Philo Vance. A brainy, ex-college professor who can still execute a perfect judo move on a trained soldier (c.f. The Benson Murder Case, 1926).

Boodler is not a particularly memorable detective, personality-wise, but very acts as a proper detective as he pries information from the suspects, sniffs around the army base for tangible clues and philosophies. There are three scenes from his investigation that stand out.

Firstly, there's his meeting with the victim's masculine, strong-willed, but impulsive housekeeper, Jennie Hugot, who made Colonel Kalendar's striker leave by beating him up. Boodler has to threaten her with "a sock in the jaw" to get a minuscule amount of collaboration. Secondly, there's the investigation of the private study of the victim, which revealed Colonel Kalendar was not the sadist Boodler had assumed him to be, but "suffered from a reversion of the beast." A man in whose brain "the door to those dark, anthropoid ages" has been "left ajar." I think his personality should been explored deeper, because it would have strengthened the motive of the murderer. Lastly, there's a nice scene in which Boodler goes horseback riding to course jack rabbits with wolf-hounds on the prairie. And makes a gruesome discovery in a natural seepage of crude oil.

Honestly, if the plot had been a little better or more original with its solution, The Army Post Murders would have been a perfect fit for the line of regional flavored, American Golden Age mystery novels from Coachwhip Publications – such as Tyline Perry's The Owner Lies Dead (1930), Kirke Mechem's The Strawstack Murder Case (1936) and Anita Blackmon's There is No Return (1938). Unfortunately, a promising and intriguingly posed impossible crime ended up completely deflating the plot. 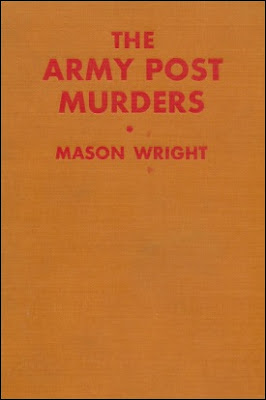 A double murder is discovered in the living quarters of two of the suspects with all the doors and windows locked on the inside, but this impossibility was explained with one of the oldest tricks in the book. Only interesting point were the historical touches to the locked room-trick, which is something I can always appreciate.

However, I expected, not completely unjustified, the locked room-trick would involve one of the half dozen ferrets Colonel Kalendar kept as pets, because it was casually mentioned electric companies use them to crawl through pipes. A string is tied to a ferret and in that way complete "the first step preparatory to pulling a cable through the pipe." Since one of the ferrets was found in the basement of the fort, I assumed it was used in a variation on the old-fashioned wire-trick to lock one of the doors or windows from the inside.

A bigger problem is that the double murder in the living quarters reduced the handful of suspect to only two, which deflated anything of interest in the story. The murderer is hard to miss at this point. The solution to the locked room murders turned out to be a huge letdown. The motive was interesting, harking back to the horrors of the Great War, but hardly clued or explored. This is why the background and war record of the victim should have gotten closer scrutiny, which could have improved the second half greatly.

The Army Post Murders opened strongly with "a jigsaw puzzle of human emotions," set in an army fortress in the middle of nowhere, tackled by a tireless detective, but the explanations for the various puzzle pieces were routine or uninspired. It would have been nice to have found an good, unsung detective novel worthy of being reprinted, but you're not missing out on anything, if you're unable to find an affordable copy. I recommend you find yourself a copy of the previously mentioned The Medbury Fort Murder instead, which played a similar game with better and more original results.
Geplaatst door TomCat on 8/27/2019