John Russell Fearn was an incredibly prolific fictioneer who cut his teeth in the American pulp magazines of the 1930s, writing primarily science-fiction, but in the mid-1940s he began to move into the hardcover novel market with wildly imaginative, pulp-style detective novels – bubbling with creativity, original ideas and some innovative tricks. Fearn had an fundamental understanding what makes a detective story tick with his own ideas what can be done with it, but he was also a pulp writer in heart and soul. So he wrote fast and what he wrote often lacked the polish of his more well-known Golden Age contemporaries. 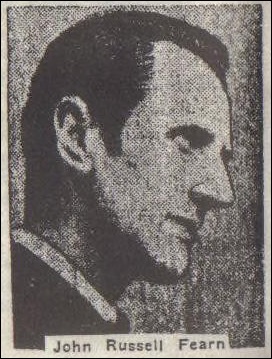 Nevertheless, Fearn could be a tremendously entertaining mystery writer whose rich imagination and original ideas turned many of his second-string mystery novels in clever or innovative pieces of detective fiction. Sometimes, he produced something that was more than merely a fun, second-string pulp mystery.

Within That Room! (1946) is mostly a throwback to the turn-of-the-century detective story, but distinguished itself with a unique locked room-trick concerning a haunted room where, once a year, a demonic entity appears – levitating in mid-air! They Arm Alone (1947) has, what can only be described as, a "once in a lifetime" crime never used before or since in a detective story. Except for One Thing (1947) is an inverted mystery with the main question being what happened to the body and the solution is shockingly original. The Master Must Die (1953) preceded Isaac Asimov's The Caves of Steel (1954) as an experiment in transporting the traditional (locked room) detective story to the science-fiction genre, which has a sequel in The Lonely Astronomer (1954). A less than perfect blend of the two genre's with an annoying detective at the helm, but the absolute loopy, purely science-fiction solution to the impossible murder was vivid and original.

The inventive impossible crimes, the creative scientific murders and his deeply-rooted ties to the pulps aren't the only things that sets his detective novels apart. Fearn set some of his best detective novels among the lower-and working classes of society, which give them a very unusual atmosphere for traditional detective novels.

One Remained Seated (1946) and the posthumously published masterpiece, Pattern of Murder (2006), take place among the people who work at movie theaters in the 1940s and 50s, while Death in Silhouette (1950) is a locked room mystery with an ordinary, working class family home as the backdrop – which has a great play on the double-solution. Flashpoint (1950) gives the reader flashes of the malaise in post-war Britain. So you don't come across large, sprawling mansions or country houses in Fearn's detective story, but, when they're used as a setting, there tends to be a utilitarian reason behind it.

The Crimson Rambler (1947) takes place in-and around a big, rambling manor house, some hundreds of years old, but a large place with surrounding grounds were needed for the intricate locked room-trick to work. Account Settled (1949) introduced a large, isolated house in its second half that had been converted into a giant, mechanized death trap. 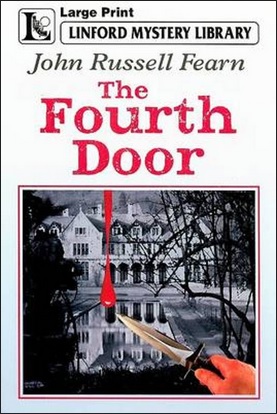 So with all of that in mind, I expected the subject of today's review, The Fourth Door (1948), to follow a similar track with its manor house setting as The Crimson Rambler or Account Settled. Philip Harbottle noted in his 2017 guest-post, "The Detective Fiction of John Russell Fearn," that The Fourth Door has "some impossible crime sub-texts," but that's not the case and the story, while toying with fingerprints, is not one of Fearn's science-based mysteries – instead opting to play around with some dusty old tropes from a bygone era. Fearn emptied a bag of 1920s mystery cliches, a big manor house, twins and an oriental dagger, which he used to confuse and mislead the genre-savvy reader. Something he succeeded in doing for a good chunk of the story!

The Fourth Door takes place amid the flat, densely wooded countryside of Caldon Village, Berkshire, which is overlooked by a hill with a ruined castle perched on its summit. This beautiful, picturesque sight is what greeted Elva Reeves when she arrived there from London.

Elva Reeves has been engaged as the new parlor maid at the home of Drake Caldon, Caldon Manor, where he lives with his cousin, Barry Wood, who works as his estate manager and a small staff – most notably the butler and housekeeper, Mr. and Mrs. Carfax. There used to be a twin brother, Arthur Caldon, but the brothers had one hell of a row three years ago. So now Arthur lives in a cottage, half a mile from the cottage, "where he dabbles at painting for fun," but he still loves to spite his brother. Such as getting engaged to Jessie Standish, who runs a garage with her brother, because getting "the chance of tying up the Caldon name with a garage" amuses him. Arthur also has in his possession a antique, oriental dagger with "an extra long, thin blade" that will become an important piece of evidence in a murder case.

A very conventional premise that seemingly becomes predictable when Wood tries to make a move on Elva, but Drake tells him to go pound dirt, because he intends to make Elva his wife. But then the story unexpectedly abandons the well-trodden path.

Elva has no interest in the salaried estate manager as "a possible man to help her climb the social ladder" and naturally agrees to become Caldon's wife. She goes from parlor maid to personal secretary to lady of the manor in mere weeks, but less successful is her attempt to end the feud between her husband and brother-in-law, which forces her to side with her husband. And it is revealed that Caldon has Wood completely under his thumb, because he has another man's life on his conscience. 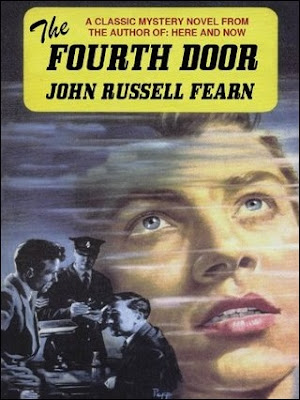 So you would assume that everything has been put in place for the murder of either Arthur or Drake, but it's Jessie Standish who's murdered with the oriental dagger in her bedroom and her brother witnessed Arthur fleeing the scene – or was it his brother? After the murder, Arthur disappears and his cottage is torched to the ground. A pretty problem for the rustic Inspector Butteridge, "the best criminal expert for miles around," who's faced with "a lot of tomfool clues" suggesting three equally maddening options: (A) Drake framed his brother and perhaps even murdered him (B) Arthur committed the murder and perhaps could have taken his brother's place at the manor house (C) a third person is pulling the strings from the shadows. A possibility that cannot be discarded out of hand.

The groundwork for The Fourth Door is rock solid with an original take on some old, hackneyed tropes and fully expected the ending would cement it as one of Fearn's best detective novels, but the plot began began to fall apart towards the end of chapter 15. My problem is not that an important clue fortuitously fell into Elva's lap, but that's where the trouble started with the plot. Next thing that happens is unexpected, completely ridiculous, twist in the plot-thread about the past murder. A twist that could not possibly have been secret to Wood, because he kept a steel cashbox in his room with newspaper clippings. I don't believe the newspapers would have neglected to mention such an important and essential detail, but it was necessary to add another dimension to option C and to tidy up another (minor) plot-thread.

What ultimately prevented The Fourth Door from becoming an alternative classic, of sorts, is the ending. Fearn came up with a truly imaginative designed to trick and confuse experienced mystery readers, but he decided to go with obvious and least imaginative explanation. So the intriguing premise was completely wasted. I can't help but think what John Dickson Carr or Agatha Christie could have done with the setup, because The Fourth Door had all the potential to be a detective novel like Carr's Death Turns the Tables (1941) and Christie's Peril at End House (1932). But this unfortunately turned out to be a case in which Fearn's pulp tendencies, fast writing and careless plotting, worked against him. The Fourth Door should have been so much better!

Interestingly, the multi-faceted motive of the murderer showed some of his usual ingenuity and creativity, of which was one facet was something new (certainly at the time) that should have been explored further.

On a whole, The Fourth Door started promising, but failed to deliver on its promise and therefore hard to recommend to anyone who's not a fan of either the author or obscure, second-string mystery novels – which is, admittedly, a very niche corner of the genre. So, if you're new to Fearn, I recommend you start with his masterpiece, Pattern of Murder or the excellent Flashpoint. John Norris, of Pretty Sinister Books, wrote glowing reviews of those two titles here and here.
Geplaatst door TomCat on 8/14/2020