The House of the Red Slayer (1992) by Paul Doherty

Paul Doherty's The House of the Red Slayer (1992) is the second novel in the Sorrowful Mysteries of Brother Athelstan series, originally published as by "Paul Harding," which opens with a prologue, set in 1362, showing Moorish pirates capturing a carrack in the Middle Sea and massacring the passengers – pilgrims, merchants, travelers and tinkers. A gruesome, long-forgotten episode that would nonetheless lead to more bloodshed nearly two decades later. 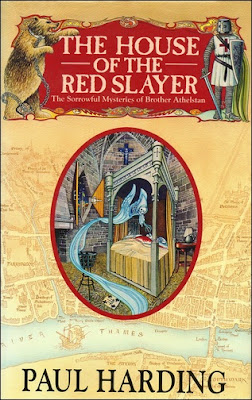 A "murderously cold" wind swept over London in December, 1377, which despite the ice and hail is supposed to be "a time of innocence and warmth," but Sir Ralph Whitton, Constable of the Tower of London, exchanged his comfortable quarter for a grim cell in the North Bastion tower. The stairway to the room is guarded by two trusted retainers with the door between the steps and the passageway securely locked. Sir Ralph and his guards are the only people with keys to the doors.

The reason for these security measures is that Sir Ralph receives "a drawing of a three-masted cog" together with "a flat sesame seed cake," which frightened him enough to lock himself up. Sir Ralph also doubled the wages of his guards and insisted that visitors be searched, but the moat underneath the tower window became frozen solid – opening a pathway to his assassin. An assassin who climbed the wall using the footholds cut into the tower, prized open the wooden shutters with a dagger and killed the sleeping Sir Ralph. A possible matter of treason that brings Sir John Cranston, Lord Coroner of London, to the Tower of London with his scribe, Brother Athelstan.

The House of the Red Slayer is surprisingly conventionally-structured during most of the first half of the story with Sir Ralph's family-and social circle filling the small pool of suspects.

There's his daughter, Philippa, who's betrothed to Geoffrey Parchmeiner. A young man who enjoyed the approval and trust of his prospective father-in-law. A brother, Sir Fulke Whitton, who can expect to inherit a chunk of his estate. A mute Moorish servant, Rastani, whose conversion to Christianity is doubted and has a reason to harbor a grudge against his master. Gilbert Colebrooke is his disgruntled lieutenant and wanted Sir Ralph's post for himself. A chaplain, William Hammond, whom Sir Ralph "caught selling food stocks from the Tower stores." Finally, there are two friends of Sir Ralph, Sir Gerard Mowbray and Sir Brian Fitzormonde, who are now hospitaller knights, but served with Sir Ralph in Egypt.

So most of the first half of the story is told as a traditional, Golden Age-style detective story with its focus primarily on the mysterious murder in the tower room and there only two, very minor, subplots dangling in the background – concerning Cranston's marital problems and the desecration of Athelstan's churchyard. The Great Community is "plotting treason and rebellion" in the shadows, but these plot-strands barely have a presence. 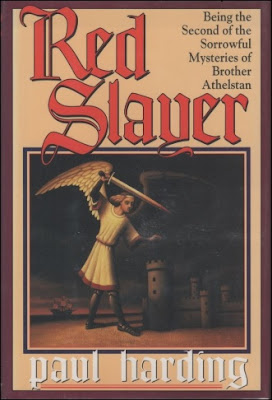 Doherty is a cruel God who cannot be appeased, or satisfied, with a single, measly corpse and the wholesale bloodletting in the prologue proved to have been the soup severed before the meal.

A second victim slipped from a parapet and spattered his brains on the sharp, icy cobbles below, which coincided with the sounding of the tocsin bell, but that "great brass tongue only tolled when the Tower was under attack." Something that was not the case and when the soldiers went to investigate, they found only "the claw marks of the ravens" in the snow surrounding the bell! A minor impossibility of the no-footprints variety with a simple, but good, explanation. After this second murderer stops being subtly and the murders that follow are even by Doherty's standard savagely brutal and gory, which is underlined by his unfurnished depiction of the times.

Doherty doesn't romanticize the past and has no problem with the showing the stinking streets, the heaps of human waste and the unwashed masses or how the frost tortured the wandering lepers and slaying beggars huddled in their rags – while the blackened corpses of river pirates hung picturesquely from the low scaffolds. And remember that this is supposed to be a Christmas-themed mystery novel!

Regrettably, The House of the Red Slayer is a better historical novel than a detective story, because the murderer is not is difficult to spot or hard to figure out who this person was in the prologue and motivated this person. But it was admirable the way in which Doherty tried to misdirect the reader by presenting one of the murders in a very different light than you would expect from him, but that's what immediately aroused my suspicion. Once you look at that murder as a [redacted], there's only one person who could have done it. So, yeah, I didn't reach the same conclusion as Brother Athelstan with a dazzling piece of armchair reasoning, but the scant clueing made that nigh impossible anyway.

The House of the Red Slayer is one of those Doherty novels that is strong on historical content and writing, but have weak clueing and a plot that is easy to pick apart. So not the strongest title in the series, but, as a historical novel presented as a detective story, it's a very immersive read and the idea to "camouflage" one of the murders was a genuinely clever touch. Even if it can give the whole game away to a reader who has consumed an unholy amount of detective fiction.
Geplaatst door TomCat on 8/06/2020