Seven months ago, I began my review of Motohiro Katou's Q.E.D. volume 4 with a belated New Year's resolution, namely to reach volume 10 before 2020 draws to a close, which came sooner than imagined with a little less than five months to go – opening the way to end 2020 with a review of volume 20. This should be doable if I discuss volumes 11-20 as twofer reviews. But lets take a look at volume 10 first! 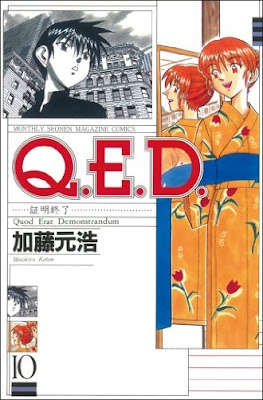 I've commented in previous reviews that Q.E.D. is practically incomparable the other, more well-known, anime-and manga detective series, because Motohiro Katou took such a radically different approach to characterization, plotting and storytelling-and structure than Case Closed, Detective Academy Q and The Kindaichi Case Files. The tenth volume honors this reputation with one of the most atypical anime/manga detective stories. Yes, I've said that before about previous volumes, but this is truly something else. And for various reasons.

Firstly, the previous ten volumes all comprised of two stories, spread out over two longish chapters, but volume 10 is one long, novel-length story, "In the Hand of the Witch," which is a prequel story that takes place in Salem, Massachusetts – where 300 years ago "the famous witch hunts started in America." So you might reasonable expect a detective story drenched in the lore of witchcraft and witch hunts, but the story is one of murder trial with all the courtroom shenanigans and wizardry of Erle Stanley Gardner's Perry Mason. You never see a good, old-fashioned courtroom dramas in these anime/manga detective series.

"In the Hand of the Witch" begins with the return of Sou Touma's younger sister, Yuu Touma, who was introduced in volume 6. She came back to Japan with a postcard that was delivered to her brother's address in the United States and she needed an excuse to visit Touma, but he's not home when she arrives. So she begins to tell Kana Mizuhara the story of the case he had been involved in when he was a 10-year-old child prodigy at MIT. A case that happened five years ago.

At the time, the 10-year-old Touma held a part-time job inputting data for the Massachusetts' District Attorney office where comes into contact with a young and ambitious prosecutor, Annie Craner, who's about to make her courtroom debut.

Craner has been placed in charge of the Marcus Osborne murder case and is tasked with prosecuting and securing a conviction against their suspect, Mrs. Sarah Osborne, who was found to be all alone with the body of her husband when two local policemen on patrol heard a gunshot coming from the Osborne mansion – perched at the end of a cape in Salem. The roads coming in and out of the cape were barricaded and a mountain hunt was conducted without result. So the only person who could have shot Marcus Osborne was his wife. Sharah was a devout member of a dubious organization, The Path to Arcadia, which taught "self-enhancement through the cosmic forces" and "donated a lot of money" to the group. 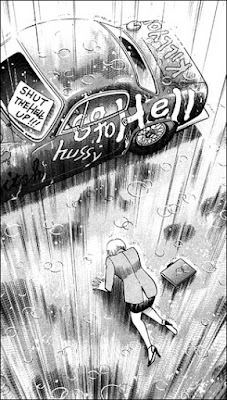 The police "suspected she killed her husband for the inheritance" and was taken into custody a week later.
An easy, slum-dunk case that a young prosecutor can put on their resume, but the oafish, incompetent-looking and nameless defense attorney is giving her an unexpectedly tough fight. A character halfway between Gardner's Perry Mason and Craig Rice's John J. Malone, who not only begins to punch holes in Craner's case, but drops a bombshell in the middle of the courtroom with an alternative solution! A (false) solution backed by ballistic evidence. And on top of that, the public opinion begins to turn against Craner as she's being accused of conducting a modern-day witch hunt.

It takes an astute observation from Touma to put Craner's case back on track, but Touma acts mostly as background character struggling whether, or not, he should help a troubled student, because he sees himself as "a bringer of misfortune" – who always ends up hurting the people around him. Touma is depicted here as a child with too much weight on his shoulder, which gives the story a dark edge. Particularly in the light of the tragic conclusion of the story and trial. Something that had a "profound influence" on him.

So, character-wise, "In the Hand of the Witch" is an important entry in the series and the solution to the murder has some clever and even ingenious ideas, such as where the murder weapon was hidden, but the scheme had too many loose nuts and bolts rattling around to make it convincingly work. Some of those loose nuts and bolts depended on a large repository of pure, undiluted cosmic luck and planning to either obtain or make them work the way it did. This made the murder look more like a reckless gamble than a carefully planned crime and ruined, what could have been, a first-class cat-and-mouse courtroom drama.

Yeah, the plot-technical side of this volume was slightly disappointing with bits and pieces that were hard to swallow, but the storytelling and characterization were as fascinating and surprising as usual. How many of these anime/manga detective series would reduce their main protagonists to background characters in the longest story of the series? A story with a sequel, of sorts, that will be told in the second chapter of volume 12. So you can very likely expect a twofer review of volumes 11 and 12 sometime later this month.
Geplaatst door TomCat on 8/07/2020