"If ever you make up your mind to commit a murder, don't make the mistake of trying to be clever."
- Dr. Benjamin Trancred (G.H.D. & M. Cole's "Too Clever by Half," collected in Detection Medley, 1939)

Except for One Thing (1947) seem to have been the debut for one of John Russell Fearn's myriad of pennames, namely "Hugo Blayn," which he used for two of his series-characters, Chief Inspector Garth and Dr. Hiram Carruthers, who occasionally worked together on the same case – e.g. Vision Sinister (1954) and The Silvered Cage (1955). So the book also marked the first appearance of Garth. 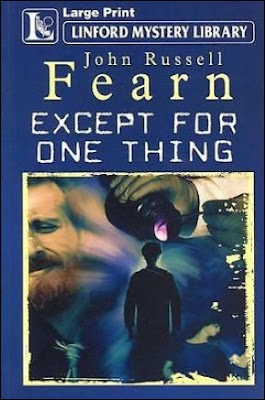 There is, however, a structural difference between Except for One Thing and the subsequent titles published under the Blayn byline, such as The Five Matchboxes (1948), which were all impossible crime novels. All except for this first one.

Except for One Thing can best be described as a Columbo-style inverted detective story with some of the trappings of an Anthony Berkeley crime novel (c.f. Trial and Error, 1937). And the plot is about as good as anything associated with two names. I've only read less than ten of Fearn's detective novels, but this one ranks as one of his best and has a killer twist in the tail regarding the disposal of the body.

The opening of the book introduces the lead character, Richard Harvey, who finds himself with two lives on his conscience before too long, but some readers today may find his motive to be wholly unconvincing – since it would hardly be a reason to kill someone in today's society. However, you could be sued for "a breach of promise" when you broke your promise to marry and this could have ruined a man in the past.

So this could lead to a very unpleasant situation when the woman in question refuses her "heart balm," or severance pay, and insists on trapping her reluctant fiance in a loveless marriage.

Valerie Hadfield is a beautiful blonde, but ice-cold, actress playing a lead role in a long-running musical comedy, which is where Harvey saw her for the first time. Harvey became completely enamored with her, but had to come to the sad conclusion that the woman he had seen laughing, singing and making love on the stage was in actuality "carved out of a glacier." Slowly, Harvey came to the realization that had fallen for the role she was playing and that their (secret) engagement was a mistake, but Valerie simply refuses to break the engagement and has enough to potentially ruin his reputation – such as a pile of passionate love letters and an inscribed cigarette box. She's determined to marry him in order to climb the social ladder in polite society.

You see, Harvey is a wealthy and distinguished research chemist, who occasionally works for Scotland Yard, but Valerie promises to start a scandal that'll tarnish his name "in every club and scientific association in town." And this would effectively prevent him from marrying the girl he has been seeing for the past eight months, Joyce Prescott. 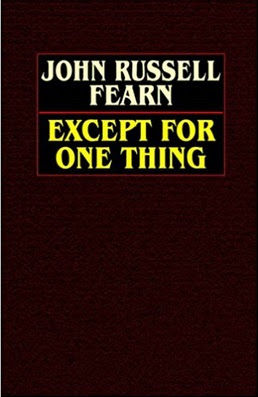 So "an insidious thought" began to fester in his mind. A thought that, ironically, germinated into tangible plans after a chance encounter with his policeman friend, Chief Inspector Mortimer Garth. At the Stag Club, Garth was explaining to a follow member the difficulties of committing "the perfect crime" in an age of science, because "it's impossible to be rid of a corpse so completely that nobody can find it" and referred to several celebrated failures – like the gruesome murders committed by Dr. Crippen and William Sheward. Harvey is of the opinion that "perfect crimes do exist" and we never hear of them "because they're perfect."

Harvey has known Garth for many years and has come to look upon him as a machine, "a brilliant analytical thinker," but the inspector himself admitted he was not infallible. So could he lead Garth down the garden path?

What follows gives the reader a front-row seat to the planning, and execution, of a carefully plotted murder, which has both flashes of brilliance and nuggets of utter stupidity. One of the more cleverest aspects of the plan is his creation of an alter ego, named "Rixton Williams," who's cast as Valerie's secret admirer and prime-suspect in her disappearance. Harvey had a pretty clever reason for using such a rare and unusual name like Rixton, but the observant armchair detective will also pick up on some of his first small mistakes.

Like the withdrawal of two thousand pounds and depositing the money at a different bank under the name of Rixton Williams. However, the real mistakes begin to pile up the moment he finishes strangling Valerie.

Someone saw him, as Rixton, carrying Valerie's body to his car, but told this witness that she was blind drunk. There is, however, only a single bottle of champagne found at the home he got under his alias and the place where the murder was committed, but Garth, astutely, observed that's impossible to get dead drunk "a third of a bottle of champagne." A second witness, Valerie's chauffeur, forces Harvey to improvise a "second and entirely unrehearsed murder," which both provide all the material for a good, old-fashioned cat-and-mouse game between the Scotland Yard detective and the well-known research chemist – recalling the best from Columbo. A comparison strengthened when Garth tries to involve Harvey in the investigation. And the latter is never quite sure how much Garth really knows. 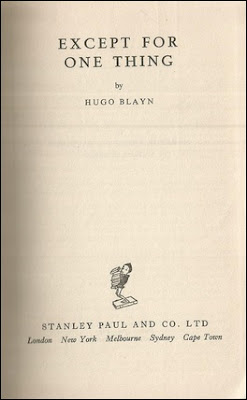 There is also a human aspect to the story, as Harvey is seriously suffering under the strain of having snuffed out two lives, which causes him to lose a lot of sleep and slowly his mind begins to deteriorate. When the story began, you could still sympathize with his situation, but, by the end, he has become functionally unhinged and even began to taunt Garth by sneakily showing him the truth. And gloated over how he had outsmarted the man from Scotland Yard. One component of his plan definitely warranted some gloating on his part.

I alluded to this at the beginning of the blog-post, but what really helped made this book standout is the answer to the only question readers have to figure out themselves before reaching the end of the story: how did Harvey manage to dispose of Valerie's body without leaving "an atom of proof that murder was done." The solution is fairly clued and the method is as clever as it's inventive. You'll never forget where the body ended up. I would rank this aspect of the plot alongside the John Dickson Carr's classic "The House in Goblin Wood" (collected in The Third Bullet and Other Stories of Detection, 1954). The solutions for the disappearance of a body are very different in both stories, but you'll never forget either explanation!

I guess that's what attracts me to Fearn's work. He may have been a second-string pulp writer, but he evidently was very fond of constructing plots and always seemed to try to be as original as possible. Or, at least, attempt to find a different angle to an old trick. Occasionally, this resulted in a plot elevating one of his books above what a second-stringer should be capable of doing. Thy Arm Alone (1947) is one example of this and Except for One Thing is another.

Highly recommended to everyone who loves Columbo, inverted detective stories or a good and original how-dun-it. So you can expect more reviews of Fearn in the future.
Geplaatst door TomCat on 4/28/2017