The 74th of Gosho Aoyama's Case Closed, published in Japan as Detective Conan, begins with the conclusion to the case that closed out vol. 73 in which an armed man with explosives strapped to his chest takes Richard Moore, Rachel, Sera and three aspiring female mystery novelists hostage – demanding that the famous "Sleeping Moore" identifies the murderer of his sister. Miku Sawaguri had become one of the youngest, bestselling novelists of Japan when she was found dead, in a locked room, at a hot spring resort. She apparently committed suicide, but her brother refused that explanation. 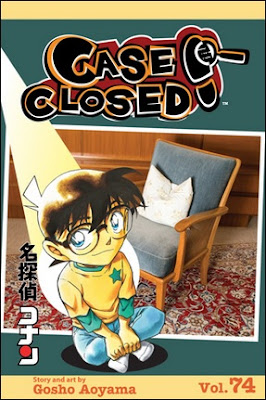 Just before she died, Miku posted several messages online indicating she had three visitors to her hotel room, whom she referred to as the elephant, fox and mouse, to ask for an autograph. So one of these three visitors must be the killer, but who and how?

Conan has to assume his original identity and reason with the hostage taker over the phone to both solve a murder, in record time, as well as preventing a small bloodbath, which is done with an excellent use of the false solution – based on the victim's superbly titled novel, The Grim Reaper's Funeral Procession. Conan even gives a brief description of the plot and it's a psychological thriller about a homicide cop investigating his own murders. Anyway, the locked room-trick is nothing special and a slight variation on an age-old trick, but the vital clue pointing straight to the murderer was beautifully hidden in plain sight. So, technically, a good and solid story, but nothing to make it standout in the series.

The second story is going to be hard to properly describe, because the plot appears to be all over the place with recurring characters turning up or being mentioned. A trend that runs, like a red-thread, through the entire volume.

Doc Agasa found an old pot in his shed that he once bought at a flea market and posted a video online asking for an appraisal, but Anita accidentally appeared in the video. Conan is afraid that the video might lead members of the Black Organization to their doorstep, which is exactly what seems to happen when Amy, not Anita, is kidnapped. But the case takes a bizarre turn when they find a cellphone with a note saying, "read the text and follow the orders." Whatever they expected the ransom demand to be, it certainly wasn't that!

I've said several times before that kidnapping stories are my least favorite kind of detective story, because they're rarely any good, but, every now and then, a truly good one turns up and it's usually in this series – such as the excellent second story from vol. 72. This one is even better! I thought it was very clever to (ROT13) pbire-hc bar pevzr (gursg) jvgu nabgure (xvqanccvat) giving gur xvqanccref na rkphfr gb hfr gur eht gb jenc naq pneel Nzl va jvgubhg nggenpgvat fhfcvpvba. Normally, this would be good, if minor, entry in the series, but then there are all the recurring characters suspiciously sneaking around in the background or mysteriously being referred to. Masumi Sera is asking pesky questions and obviously is up to something. Subaru Okiya is spying and eavesdropping on Conan. A lost cat features in the story and has a coincidental link to another familiar face in the series. Black Organization is ominously referred to as "Them."

Somehow, Aoyama got more out of the plot than was originally in out with the result being an excellent and memorable story. A story that comes highly recommended to fans of Edward D. Hoch. You'll know why when you learn the solution. Only disturbing thing is how effortlessly Amy shrugged off her harrowing kidnapping experience. Have the Junior Detective League really become this callous and jaded? 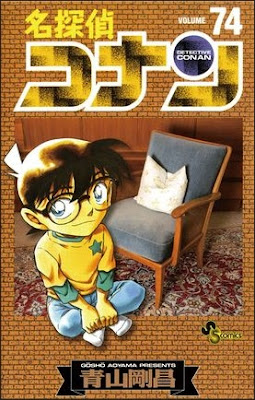 The third story brings Harley Hartwell (Heji Hattori) back to Tokyo, but, before he can tell Conan why, Kazuha calls him to tell that she's detained at a restaurant where a man had died in the bathroom – apparently after eating poisoned candy. A foreign guy had found the body and ordered nobody to leave. And that guy is the FBI agent, André Camel, who previously appeared in vol. 58. Camel overheard the victim talking on his phone to someone he called his childhood friend and admitting to have murdered a man ("I'm the one who poisoned Abe"). Then he heard a groan, broke down the door and found the body. But did Camel correctly understood what he heard? Masumi Sera proposes to use the case to settle the friendly rivalry between the Great Detectives of the East and West, Jimmy Kudo (Conan) and Harley Hartwell.

I imagine Ho-Ling must have loved this story with its linguistic clues and plot balanced on the differences, and nuances, between regional dialects. And how it can even fool native Japanese speakers. A good and decent enough story that, once again, elevated by everything playing out in the background.

The last story tells why Harley traveled to Tokyo, "a letter from a dead man," who expressed his wish to meet the young detective to confess a sin and told him he'll be waiting at "the house of he murdered man" on "the night of the next full moon" – enclosed is a key and an address in Osaka. The writer is the president of design company, Wakamatsu, who was suspected to have been killed by a burglar at his summer villa. But when the appointment was held, they found someone in the bathroom who inexplicably "vanished into thin air." A message had been carved into the wall, "E-Y-E."

Harley arranged a meeting with the victim's family to discuss the case, but they couldn't been inside for more than 30-minutes when one of the family members is impossibly poisoned with a slice of cake. A single slice of poisoned cake that could not have been poisoned or have been forced upon the victim to take. These kind of mysterious poisonings have become a staple of Case Closed and often have solutions that are simultaneously very simple and devilish ingenious (e.g. "The Loan Shark Murder Case" from vol. 15), but this one was a little too simplistic and dangerously careless with cyanide! There's also an obliterated dying message that has to be found at the first crime scene, which is in the hands of two other characters who had previous appearances. Very fitting that they had to be the ones to handle that side of the case. Finally, a second poisoning adds a third victim to the bodycount and ends this volume on a cliffhanger.

On a whole, this was not a bad volume at all, but all of the stories, including the splendid and original second story, used the appearances, cameos and references to all those recurring characters to bolster their plots. For example, the third story would have been a very minor, forgettable case without Agent Camel, Masumi Sera and the battle-of-wits between Conan and Harley. But that's one of the perks of a long-running series that put in the effort to setup an entire fictional universe. So, yeah, an enjoyable volume for fans.

On a last, somewhat related note: three months ago, I posted my fan theory, "Detective Conan: Who's the Boss?," speculating on the true identity of the B.O. leader. Ho-Ling and 8bitorne shot the poor thing to pieces in the comments, but still like the idea of him being Conan's Moriarty.
Geplaatst door TomCat on 9/14/2020