The Hand of Mary Constable (1964) by Paul Gallico

Paul Gallico was an American writer and self-described storyteller, perhaps best remembered today as the author of The Snow Goose (1941) and The Poseidon Adventure (1969), who made a brief excursion into the detective genre with Too Many Ghosts (1959) and The Hand of Mary Constable (1964). A pair of unconventional impossible crime novels with a more contemporary take on the turn-of-the-century "ghostbusters" stories by William Hope Hodgson (Carnacki, the Ghost-Finder, 1913) and L.T. Meade (A Master of Mysteries, 1898).
The detective, or ghost-breaker, in these novels is the chief investigator for the British Society of
Psychical Research, Alexander Hero, who nevertheless operates as "an independent private detective of the occult." Hero believes the occult can be defined as a compound of "wishful thinking, sleight-of-hand, music-hall tricks, the evidence of idiots, coincidences, unreliable reports, greed, human gullibility" and, to a certain extent, the unexplainable. And, in his opinion, there has "not been a single case proven of the dead returned" or "the existence of a spirit world” up to now. Hero remains open-minded and the next case always remains open until he "can shut the door." 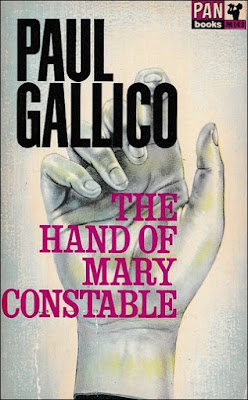 So, while Hero remained eager for genuine proof of the paranormal, he actively destroyed "the charlatans of spiritualism" who "preyed upon the misfortunes of the bereaved and ignorant."
Too Many Ghosts brings Hero to Paradine Hall, filled to capacity with ghosts, where furniture moves around on its own accord, candles extinguish themselves and the ghostly figure of nun can materialize out of nowhere – not to mention the phantom harp player in the locked music-room. The solution to the ghostly fingers, plucking at the harp strings in the music-room, makes Too Many Ghosts a notable locked room mystery of the period. And not just the locked music-room. Hero "de-haunts" every single, seemingly supernatural, occurrence and manifestation.
I was glad to learn at the time Gallico penned a sequel, The Hand of Mary Constable, but some lukewarm reviews and comments over the years had condemned it to the Purgatory Zone of my TBR-list. I was in the mood for one of those séance mysteries and wanted to save Patrick Kelley's Sleightly Invisible (1986) for later this year. So here we are.

The Hand of Mary Constable finds Alexander Hero en route to New York City in the wake of an alarming letter from Dr. Frank Ferguson, President of the American branch of the Society for Psychical Research, who tells them there "a number of occurrences" with potentially dangerous, earth-shattering consequences – which involves the U.S. government at its highest level. Ferguson refuses to give any details in his letter, but, when Hero arrives, he's ushered to a private meeting with some mighty important, highly ranked officials. General Walter Augstadt, in charge of a special project, Saul Wiener, the Regional Director of FBI, and an FBI expert specialized in fingerprints, Mr. Ferris. What they tell him could affect the Cold War in a most unexpected way.
Professor Samuel Constable is the head of the Department of Cybernetics, at Columbia University, who has been working with the Department of Defense on the secretive Project Foxglove. 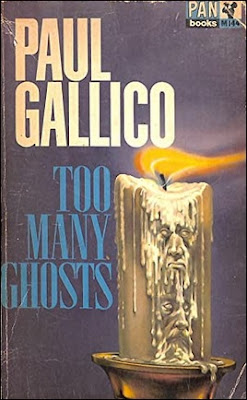 The objective of Project Foxglove is to develop a way to intrude upon "the commands taped into a missile" and "persuading it to disobey these commands and in some cases to reverse them," which effectively turns them into homing pigeons. A device that will, one way or another, reshuffle the cards on the world stage. If every nation had the device, computerized technology would be rendered ineffective on the battlefield and fighting would have to be done with field armies or dropping bombs from airplanes, but, if the Soviets gets it first, they're all "dead ducks" – nations around the world have been working hard on similar projects. Professor Constable got it and they were only months away from a breakthrough. But a personal tragedy in his life would end placing the whole world on "the horns of a nasty dilemma."
A year ago, Professor Constable lost his 10-year-old daughter, Mary, who was diagnosed with leukemia and passed away shortly after. Mary's illness and death left her father "a markedly changed man," which made him easy prey for two so-called spiritual mediums, Arnold and Sarah Bessmer.
Professor Constable was told that the Bessmers had receives a message from Mary and he began to attend their weekly séances, during which he heard "a voice purporting to be that of his daughter" and had physical contact with "a figure which he believes to be a materialization of her." Amazingly, they were able to produce physical evidence of Mary's ghostly presence! During a séance, the ghost of Mary had thrust a hand in a bowl of liquid wax and thereafter in cold water, which left behind "the transparent hand and wrist of a child" – an empty glove of wax! It would be impossible for any living flesh or bone to have been withdrawn from it without shattering it. Even more astonishing is that the wax glove has fingerprints belonging to Mary! An impossible-to-fake detail since Mary's body had been cremated.
So having one of your most important scientists, who's working on a top secret project, in the clutches of two greedy vultures is bad enough, but things become fishy when Mary begins to talk world politics. Someone is dictating Mary's messages with the intention to make him either defect or voluntarily part with his knowledge. Considering how sensitive the whole situation is, they can't simply cut the professor from the mediums and prevent him from “communicating” with his daughter. A course of action he would most definitely resent intensely.
Ferguson asks Alexander Hero to go undercover at the Church of the Holy Ozone as Peter
Fairweather, a lecturer at Cambridge, who recently lost an entirely fictitious fiancee and gives him the unenviable task of carefully weaning the professor from the mediums without damaging him or force him to defect – which is easier said than done. The only way to go about it is smashing the illusion of the solid, one piece wax glove. And to do that, he has to figure out how "to make a wax glove with the fingerprints of a person who is dead and buried" and duplicate it. An already difficult task made even harder when he also has to content with the personality of his assumed personality, the flesh-and-blood ghost of his dead, nonexistent fiancee, a Russian assassin and skeptical government officials. 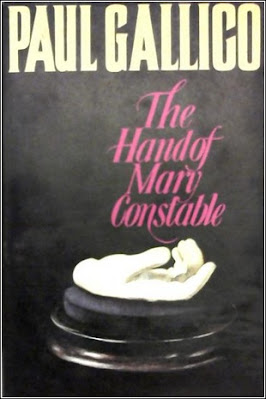 The Hand of Mary Constable is a weird kind of crime novel that's not easy to pigeon-hole. The impossibility of the wax glove is the peg on which the plot hangs, recalling the bloodless impossible crime stories by Carter Dickson and David Renwick, but, around the halfway mark, the cold war thriller elements began to intrude on the story without being a hybrid of either. The Hand of Mary Constable is a (crime) novel that happens to have elements of both the impossible crime story and cold war thriller, which is an interesting and unusual blend. But one that began to lose its flavor once the story passed its halfway mark. Gallico also decided to tip his hand to the reader here and it didn't do the plot any favors.
Thankfully, the solution to the impossibility of Mary Constable's hand was better than some reviews suggested and the explanation of how the cast was made certainly was original. Something to be expected from the writer who dreamed up the trick of the phantom harp player in a locked music-room. However, the trick would probably have been better served in tighter, more focused, detective story that would allowed the finer details (i.e. fingerprints) to be tidied up. More importantly, The Hand of Mary Constable is a very well written, imaginative and engrossing novel in spite of its flaws and the only that actually bothered me is that the story undersold how dark and revolting the plot against Professor Constable truly is – occult brainwashing of a grieving father with the memory of his dead child as bait! And it's not just him who's being tortured. Mrs. Constable makes a brief appearance, but that's enough to take pity on that poor, long-suffering woman who first lost her only child and now has to watch her husband slipping from her fingers.
So, with everything told, The Hand of Mary Constable is not an unsung classic of the locked room mystery novel, but it still has a lot to recommend with an intriguingly posed impossibility, the early, eerie atmosphere surrounding the ghostly visitations and the well intended attempt at blending different genres. Gallico betrayed here that he was a better storyteller than plotter, but Too Many Ghosts and The Hand of Mary Constable stand as noteworthy and original contributions from an outside visitor to the impossible crime and detective story. I don't think anything like these two (locked room) mysteries were published until John Sladek wrote Black Aura (1974) and Invisible Green (1977) a decade later.
Geplaatst door TomCat on 9/10/2020