Earlier this year, Kate and Laurie reviewed two of the three available translated detective novels by one "Maria Lang," a nom du plume of Dagmar Lange, who's considered "to be Sweden's answer to Agatha Christie" and "one of the big four of Swedish fair play mystery writers" – together with Stieg Trenter, H.K. Rönblom and Vic Suneson. Swedes who wrote well-crafted, traditionally-styled detective novels instead of padded out suicide notes (i.e. Scandinoir)? You sure don't see that anymore today! 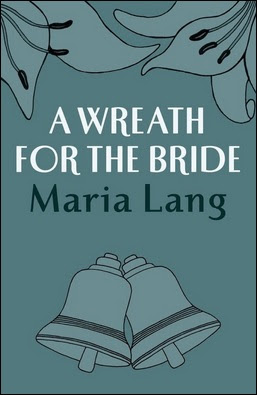 Lang wrote forty-two detective novels in as many years and was one of the founding members of the Swedish Crime Writers' Academy, but only three of her novels received an English translation in the 1960s. All three were reissued, as ebooks, in 2014. But both times, the English releases largely flew under the radar of Golden Age mystery readers. An oversight that needed to be remedied!

So I decided to take a closer look at what exactly Lang had to offer and discovered that there were not only three English translations at my disposal, but four of her novels had been translated into Dutch with old, secondhand copies still floating about the web – broadening my scope with three more titles. However, the one that beckoned my attention happened to be present on both the Dutch and English list. Easy pickings!

Kung liljekonvalie av dungen (King Lily-of-the-Valley, 1957) was translated in Dutch as De verdwenen bruid (The Vanished Bride) and the English translation gave it the most fitting book-title, A Wreath for the Bride. What attracted my attention is that the synopsis promised an impossible disappearance of the titular bride. Well, you know me!

A Wreath for the Bride takes one of her leading detective characters, Chief Inspector Christer Wick, to the fictitious village of Skoga, which is apparently Lang's St. Mary Mead. Wick is traveling to Skoga to attend the wedding of his mother's goddaughter, Anneli Hammar. A slim, quiet and self-absorbed girl who "nabbed the richest bachelor in the whole district," Joakim Cruse, an eccentric, monocle-wearing multi-millionaire who settled down in the district. Cruse is the dictionary definition of an outsider. Someone who's seen by the villagers as incomprehensible and suspicious, but his wealth and standing made his wedding the event of the year.

So when the story opens, the preparations for the wedding are in full swing when a nervous Anneli bumps into her life-long friend, Dina Richardson, at a street corner where she tells Dina she's on her way to the florist, Fanny Falkman, to inspect her bridal bouquet – a giant spray of lilies-in-the-valley. Dina watched Anneli disappear into the floral shop and talked with two elderly ladies on the doorstep during a brief, but important, shower of rain. Nobody could have entered, or exited, the floral shop unobserved, but Anneli never came back out again. Astonishingly, Fanny swears Anneli didn't set a foot inside her shop or that she heard the doorbell tinkle when she was seen shutting the door behind her. Even if she managed to sneak in without being seen, or heard, she could not have escaped through the backdoor without definitely being noticed by Fanny!
Yeah, it's a classic and promising setup of a person impossibly vanishing "as if swallowed up by the earth" and Wick notes that "one is almost tempted to turn to the occult for an explanation," but the explanation to this piece of the puzzle thoroughly demolishes it as a proper locked room mystery (Goddamn Swedes!) – an explanation used to shine a light on two of suspects. So that was a little disappointing.

Nevertheless, the strange disappearance of the bride on the eve of her wedding proves the beginning of a murky mystery, "which was to perplex and agitate Skoga more than anything else in its hundreds of years of history" and telephone lines reverberated with gossip. The fourth chapter opens with a brief and humorous scene with everyone in Skoga calling each other until the youngest, overworked and stressed out telephonist "finally collapsed and began to weep over the switchboard." But the chatter went on. Anyway...

Chief Inspector Christer Wick, of the Stockholm Crime Squad, is there as a visitor and therefore acts as a quasi-official assistant to the local policeman in charge, Superintendent Leo Berggren. This makes it difficult not to see him as an amateur sleuth rather than as a police detective. Wick even finds Anneli's body at the edge of a lake with her hands "peacefully clasped round a bouquet of lilies-of-the-valley" and a terrible stab wound to the chest. Another thing placing the book squarely in the Intuitionist School of the amateur detective is the lack of physical clues.

Lang hides her clue in the things her characters say, or do, which usually turn out to have an alternative explanation. Such as why Anneli was coming out of the office of her ex-employer, Sebastian Petren, with tears in her eyes or why Petren had to sneak out of the floral shop on the day Anneli vanished. Nothing is really what it seems and this subtle ambiguity opens the door to multi interpretations. This makes the movement of everyone involved as important to the plot as the verbal clues, which Lang cleverly used to camouflage the murderer and misdirect the reader.

So I can see the comparison with Christie and not one that's entirely undeserved, which is usually the case, but the comparison is not particular fair and places the bar, as well as expectations, way too high – which can ruin the fun for some. A Wreath for the Bride is a finely crafted, old-fashioned village mystery, but compared to Christie's body of work, it would only rank with her lesser-known, mid-tier novels. Such as The Sittaford Mystery (1931), Peril at End House (1932) and The Moving Finger (1943).

My recommendation is not to approach Lang as the Swedish incarnation of the Queen of Crime, but as a Swedish mystery writer a fan of Christie can warm to and enjoy. That's why you can expect more reviews of Maria Lang's other detective novels sometime in the future. So stay tuned!
Geplaatst door TomCat on 9/23/2020