"We have nothing to fear from the dead, past or present. The spirits were not responsible for what took place here tonight. Not any of it."
- John Quincannon (Bill Pronzini's "Medium Rare," from Carpenter and Quincannon: Professional Detective Services, 1998)

Peter Lovesey is an award-winning crime novelist of historical mysteries, police detectives and various short stories, but a significant portion of his work is gilded with the traditions of the genre's Golden Age and this was recognized by such luminaries as John Dickson Carr, Edmund Crispin and Lenore Glen Offord – who all praised his earliest work from the 1970s.

I primarily know Lovesey as the author of Bloodhounds (1996), a well-known locked room mystery, but he wrote another impossible crime novel that has been recommended to me in the past. 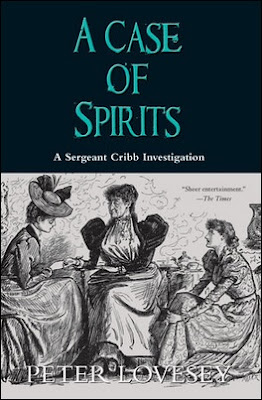 A Case of Spirits (1975) is the sixth entry in Lovesey's historical series of Victorian-era detective stories about Sergeant Cribb and Constable Thackeray, which uses to the spiritualism craze of the late 1800s as a backdrop for a seemingly impossible murder. However, the story begins with the common, down-to-earth problem of housebreaking.

Sergeant Cribb and Constable Thackeray are summoned to the Royal Academy of the Arts by their superior, Inspector Jowett, where they're introduced to an important member of the upper-crust of society, Dr. Probert – an eminent physiologist of the University of London. Dr. Probert has been the victim of a crude home burglary and the thief made away with a lurid painting. Something similar had happened to an acquaintance of his, Miss Crush, who came home one day to find a forced window, but she was missing a Royal Worcester vase in the Japanese style.

A simple case of housebreaking and thievery, but Cribb has a "relish for a burglary" and thinks of it as "a bit of a game." And immediately notices several commonalities between both thefts. The burglar was a crude, unrefined criminal who, in each case, passed on an easy opportunity to take something more valuable from the homes, but even more significant is that the burglaries occurred after the victims participated in a spiritualistic séance.

I've to take a moment here to point out that, at this point, the story really struck me as the British precursor of the Quincannon and Carpenter series by Bill Pronzini and Marcia Muller, which also takes place in the late 1800s, but the setting is California – when the Wild West had just settled down. Despite these differences in backdrop and characters, the series have a strangely similar feel to them. However, I only read this single title in the Cribb series and the impossible crime material of the book, relating to spiritualist angle, had a passing resemblance to the plot of the short story that provided this blog-post with an opening quote. So maybe that feeling is less, or even absent, in other Cribb novels.

Well, the spiritualist angle of A Case of Spirits empties out the whole bag of tricks of the table-tapping industry of the Victorian-era.

Peter Brand is "the most promising member of his profession since D.D. Home," who allegedly levitated out of window and floated back through another, but the phenomena Brand managed to produce was no less impressive. He was able to make furniture levitate and produce spirit writing from the Duke of Wellington, which has been verified by the foremost graphologist in London as authentic. It has made the young man "the talk of the metropolis." And the reader gets a front-row seat to one of his performances.

During one of his last demonstrations, Brand makes a ghostly, disembodied hand appear and disappear again. Dr. Probert's son-in-law, Captain William Nye, gets pelted with oranges by an invisible entity for being a hostile presence at the table, which all happened while everyone was linked together by holding hands. So even skeptics, such as Henry Strathmore, begin to believe they're dealing with the genuine article in Brand, but during the last experiment something goes horribly wrong and involves a deadly gizmo – an electric chair! 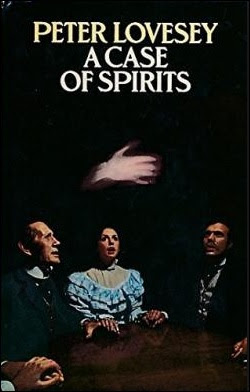 Dr. Probert has converted an oak chair into an electric chair, brass handles screwed to the armrests, attached with wires going to a black box with a thicker coil leading to the basement. There are four 104 volt batteries stored in the basement and the black box is a step-down transformer to "ensure that only a mild and even current passes through." Brand is to take place in the chair, holding the brass-handles, which allows observers, with the assistance of galvanometer, to monitor the medium when the curtains are drawn around him. The instrument would tell them if he broke contact for so much as a fraction of a second. But the step-down transformer failed and shot 400 volts into Brand. He did not recover from the shock.

I think this impossible situation is what lifted the plot above banality of the familiar, stock-in-trade trickery of the dead table-tapper, because the premise is genuinely original with an explanation relaying on both old-fashioned misdirection and technical hokey-pokey. However, I've no idea how sound the technical side of the trick actually is and whether the galvanometer could give such accurate reading throughout the experiment. The step-down transformer also struck me as a decidedly unsafe device, but then again, that's part of the point, isn't it?

After all, the story takes place during the dawn of the electrical age and these transformers were probably not of the same standard as those from the twentieth century.

The identity of the murderer and the excellent motive were also competently handled, which were fairly clued and even gave room to a false solution. It stretched the ending a bit longer than was strictly necessary, but a fairly minor and forgivable offense placed against the quality of the overall plot. I probably enjoyed A Case of Spirits even more since Andrew Greeley's Happy Are Those Who Mourn (1995) and Eric Brown's Murder at the Chase (2014) are still fresh in my mind, which are both disappointing examples of the contemporary locked room novel at their worst.

So, all in all, I really enjoyed my first meeting with Sergeant Cribb and Constable Thackeray. A story with an impossible crime plot that recalled the works of Bill Pronzini and John Rhode, which is definitely an invitation to return to the series before too long. I think my next stop in the series is going to be first one, Wobble to Death (1970), because Carr praised it as "a first-rate story." And who are we to doubt the word of the master? But my next review will take a look at a locked room mystery from my own country. So stay tuned!
Geplaatst door TomCat on 5/11/2017