When the Past Wears Us Down

Wilhelmina Angela Douwes-Schmidt was born on December 26, 1897 in Sint-Peters-Jette (Brussels, Belgium) and drew her last breath more than a hundred years later on May 11, 1998 in Amstelveen (The Netherlands). She was brought up in an artistic family, as a daughter of an operatic father and a pianist mother, instilling a love for the performing arts from early childhood and destined her for a life in the spotlights, but it was a talent for the written word that brought her lasting fame and an international audience.
Under a fictitious name, that of Willy Corsari, she began dabbling in a variety of genres and themes, touching everything from psychological novels and stage plays to children's literary and detective stories – which were also introduced into the English, French, German, Russian, Norwegian and Danish languages. This puts her in the same league as Robert van Gulik and Appie Baantjer, whose books also scaled the language barrier into the welcoming hands of a whole new flock of readers, but neither of them, not even Van Gulik, was as classically styled as Corsari. The book I picked from her body of work, Voetstappen op de trap (Footsteps on the Stairs, 1937), to commence this Vintage Mystery Challenge of 2012, can only be described as a blend between the British whodunit, with a plot that has its roots firmly planted in the works of John Dickson Carr and Agatha Christie, and the continental roman policier. 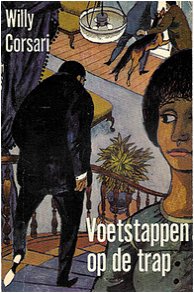 The key figure of this novel is Sir John Judge, born as Jan Rechter, who left Holland to find his luck in Britain and found it. As an entrepreneur, he put a considerable sum to his name and was even knighted for his business endeavors. Judge was also well-liked among his peers and threw money at people like candy to kids on the fifth of December, but the affluent philanthropist also harbored a darker, secretive side – one not known to his family and immediate associates but it garnered him a sworn enemy. While he was still living in his adopted homeland, a crooked man tried to kill him and were it not for the intervention of his close friend, Tjako Kiliaan, who took a bullet in the arm, he would've returned to his birthland in a casket.
But in spite of the best efforts by those celebrated men of Scotland Yard, this mysterious individual, with his crooked appearance, was never collared and once more became a fleeting shadow from Sir John Judge's apparently unmarked past, however, it infused his wife, Anja, with dreadful premonitions and visions – which persisted to haunt her restless nights even after moving back to the Netherlands. These phantasms feed her fear and whisper to her that her husband is still in danger of losing his life to an assassins bullet, but when she asks, in her desperation, Inspector Robert Lund for help all he can do for her, at that moment, is come down to their estate, De Berkenhof, and talk with her family and friends.
Inspector Lund, by the way, is the archetypical Dutch storybook detective from the pre-1960s period and comparable protagonists can be found in the mysteries from the hands of Tjalling Dix and Ben van Eysselsteijn, but Corsari might have carved the mold from which their detectives were cut. Lund is a regular homicide detective, "who looks even younger than he is," with a wife at home and got were here's now through competence and methodical police work. As I noted here, the Dutch detective story has not, as far as I am aware, an "amateur reasoner of some celebrity" or a nosy, scheming spinster who are constantly inserting themselves in murder cases or stumble over blood-spattered corpses. The detectives are always professional policemen. This has its advantages, but also its limitations. You don't have to over tax your readers credulity in order to place your detective in the middle of a murder mystery, over and over again, but on the other hand, a policeman is bound to his jurisdiction and thus limited in your settings (with exception of the occasional busman's holiday) – and our part of the genre really misses a memorable character like Sherlock Holmes.
Anyway, back to the story! The nightmarish specter, that has haunted Anja ever since the attempted murder back in England, finally seems to have reemerged and presented itself in a solid form to confront her husband, however, the only occupant of the locked study, after the door was busted open, was the body of Sir John Judge – and his murderer had dissipated as rags of mist that were blown away by a gust of wind. 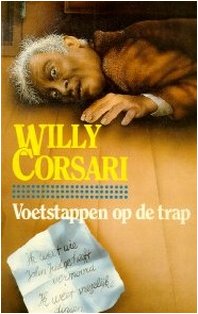 The key of the door was still stuck in the lock from the inside, the windows were securely fastened and an interconnecting door was blocked, from both sides, by a bookcase stuffed with hefty tomes and a cabinet filled with porcelain. It's the condition of this sealed environment that, at first, suggests an accident, but evidence at the scene (i.e. a fresh bullet hole that can not be accounted for) indicates that his death is a murder, one that defies common sense, but a murder nonetheless.
Lund finds himself not only confronted with a death that simply could not have happened, but also with an array of suspects who obviously belong on the pages of an Agatha Christie novel. There's Sir John's overwrought wife, Anja, and his carefree friend Tjakko, but also a limb and sickly looking secretary named Philip Gardner. Lady Cochat and her 10-year-old son Allan, who seems, at first, to have the personality of an automaton and the one who heard the titular footsteps on the stairs, and the frightened Mrs. Canna – who's is foully poisoned a day after the murder and mumbled a few cryptic words before sinking into a deep coma. There are more players, of course, but listing the entire dramatis personae here seems pointless. But take it from me that a line-up of the suspects resembles a stack of cards from the board game Clue.
I never expected that there were actual Dutch detective stories, from the efflorescent era of the genre, that were this classically styled and ingeniously plotted – and even able to toy with me as if I were new to this game! I had a germ of an idea of what actually happened in that locked study, but I kept switching suspects and methods around on at least five different points in the book – which was encouraged with a barrage of twists and a false solution that told a chilling part of the actual solution. There were one or two coincidences that helped move the plot along in certain parts, but that hardly took anything away from the story and when the solution came it was a satisfying one. A nifty play on the least-likely-suspect gambit. It showed, quite clearly, that Corsari was aware what her fellow artists in crime were up to overseas and the ending of this story also impressed me as a nod and a wink at John Dickson Carr, Agatha Christie and Conan Doyle.
But honesty compels me to point out two minor blotches: the third-person narrative does not read as smooth as could've been, especially during descriptive passages, and one component of the solution was withheld, but I am prepared to show leniency on that point – seeing as Lund was unaware of this, as well, and there were more than enough other clues to look at! All in all, this was an excellent read and a top-notch detective story that deserves a translation, if it hasn't been already, and if you come across one of her translated titles I can help you help you determine whether or not it's one of her detectives.
Well, that was the first book that I knocked-off the list for the VMC2012 and I think we're off to a good start. Not to mention that I can actually put a Dutch impossible crime novel on my list of favorite locked room mysteries now!
My VMC2012 list:
Een lampion voor een blinde (A Lantern for the Blind, 1973) by Bertus Aafjes
De moord op Anna Bentveld (The Murder of Anna Bentveld, 1967) by Appie Baantjer
De onbekende medespeler (The Unknown Player, 1931) by Willy Corsari
Voetstappen op de trap (Footsteps on the Stairs, 1937) by Willy Corsari
Een linkerbeen gezocht (Wanted: A Left Leg, 1935) by F.R. Eckmar
Spoken te koop (Spooks for Sale, 1936) by F.R. Eckmar
Dood in schemer (Death at Twilight, 1954) by W.H. van Eemlandt
Fantoom in Foe-lai (The Chinese Gold Murders, 1959) by Robert van Gulik
Het mysterie van St. Eustache (The Mystery of St. Eustache, 1935) by Havank
Klavertje moord (Four-Leaf Murder, 1986) by Theo Joekes
Het geheim van de tempelruïne (The Secret of the Temple Ruins, 1946) by Boekan Saja
Geplaatst door TomCat on 1/04/2012