"However, there is, as you have shown, a friendly readiness amongst the members of the Detection Club to help the weaker brethren, so I have written to one or two of our friends to ask them to tell me what, in the opinion of their sleuths, the solution is."
- Milward Kennedy.

There are moments when I wish there was a grain of truth in the popular surmise that human beings are endowed with an immortal soul. I have a practical reason for this longing: to have a bargaining chip when summoning Old Scratch to negotiate a business deal. Because getting an opportunity to travel through a tear in the time-space continuum to meet a bunch of detective writers from the previous century, while cheaply buying first editions and solicitation autographs, is totally worth the hazards of eternal damnation. But the joke would undoubtedly be on me, as I would freeze-up like a shy schoolgirl who's just been approached by her first crush.

At this point he slowly, but surely, starts backing away from me as my under lip starts to quiver and Lucifer impatiently begins tugging my sleeve, like an eager child who just acquired a new toy and can't wait to get home to start playing with it, and that's how I would've squandered a divine wish that could've granted me world domination or the answers to the question of life, the universe and everything. Unfortunately, this scenario, which is definitely worth an eternity of third-degree sunburns, is just a pipe dream – and the only opportunity I will ever have at soaking up the atmosphere of a meeting of the original Detection Club, is reading their round-robin novels. Well, you have to be grateful for what you get and this week I immerged myself in their second joint-effort, Ask a Policeman (1933), but this time I will leave the introduction to the review to someone else: one of the original collaborators!
Ms. Gladys Mitchell has the floor:

"I was engaged in only one of the collaborations, which were for the benefit of club funds. Anthony Berkeley and Dorothy L. Sayers exchanged detectives and, of course, Anthony's manipulation of Lord Peter Wimsey caused the massive lady anything but pleasure. Helen Simpson took over Mrs. Bradley in exchange for Sir John Saumarez. We two, I am glad to say, got along famously and it is to her that I owe, as you know, Dame Beatrice's second name, Adela."

This is an excerpt from an Question and Answer session, conducted by B.A. Pike, entitled In praise of Gladys Mitchell, and can be found in its entirely at Jason Hall's The Stone House – a website fully dedicated to the life and work of this unorthodox, alternative Queen of Crime. 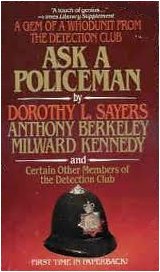 The book opens with a brief exchange between the for me unfamiliar Milward Kennedy and the plotting machine known as John Rhode, in which Kennedy asks his colleague to produce a dark and murky plot for a title, Ask a Policeman, that was presented to him by his publisher – and the follow-up is a novella-length chapter recounting the shooting of Lord Comstock, an unpalatable newspaper mogul, at his country retreat. The rag king was an expert in jacking-up the circulations of his papers by viciously attacking the establishment and on the morning preceding his murder, three representatives of institutions under siege by his publications, the government, the police and the church, visited his retreat. This makes it a very sensitive and high-profile case and with the police filling in the role as one of the suspects it's decided up on, from above, to give a few notable amateurs free reign over the investigation.
This novella-length chapter demonstrates that John Rhode is undeserving of his reputation as a dullard and sleep-inducing writer. Even with such authors as Gladys Mitchell and Anthony Berkeley waiting in the wings, ready for the opportunity to seize his pen, he contributed one of the best chapters of this collaborative effort – sketching a mystifying problem with some touches of dry humor that his fellow clubmembers had a lot of fun toying around with.
Helen Simpson is the first one who gets a shot at clearing the mystifying problems that befogs the death of the hated newspaper magnate, but instead of Sir John she has Gladys Mitchell's Mrs. Bradley at her disposal – whom she promptly dispatches to the scene of the crime. I think her, and mine, solution was the most evident one as we both fingered the same person based on the significance of the police constable who was run over with a car after the killing. But the best part of this chapter is perhaps the way in which she captured the essence of the character she borrowed and how she touched upon nearly every familiar element from Mitchell's books – from the involvement of a young teenager, a niece who coincidently had a fling with the secretary of Comstock, to the diary notes at the end and a plot thread that is left dangling in the wind. Not bad if you're limited to a mere fifty pages!
Up next is Gladys Mitchell's interpretation of Helen Simpson's Sir John Saumarez, who's an acclaimed stage actor basking in the spotlights of success, however, this is my first acquaintance with the character making it impossible to judge the accuracy of Mitchell's portrayal. The solution he proposed was probably even more blindingly obvious than the previous one, but he gave away a first-rate theatrical dénouement with the best seats in the house reserved for his readers. I have to hunt down one of Simpson's detective novels featuring Sir John for an encore.
Anthony Berkeley is the only one of the quartet of crime writers who managed to upstage the instigators of this book, Milward Kennedy and John Rhode, with his marvelous and amusing rendition of Lord Peter Wimsey and his manservant Bunter. There's a delightful scene in which they discuss the appropriate attire for an appointment with an archbishop who's under suspicion of murder! And to top it all off, he comes up with a solution that points to one of the least likely suspects of the lot as the person who pulled the trigger of the gun with a deadly precision.
Dorothy Sayers' take off on Anthony Berkeley's Mr. Roger Sheringham is equally amusing, but one wishes that as much attention was bestowed on constructing a clever solution from the given clues as on exonerating the archbishop from every suspicion – who she turned into a Machiavellian schemer cleverly maneuvering the paper tycoon into one of his own traps and saving his church from further abuse. The solution is uninspired, forgettable and actually had the flip through the chapter to be reminded who the murderer was supposed to be.
The final chapter is for Milward Kennedy, who is confronted with the daunting task of explaining away the solutions presented by the sleuthing foursome and wrapping up the case – and his approach to this conundrum turns the book into a parody that's very similar to Leo Bruce's Case for Three Detectives (1936) and his critical commentary on Mrs. Bradley, Sir John, Wimsey and Sheringham is hilarious! However, I still haven't decided whether I loved or hated the way in which he explained everything, but it's a perfect illustration of "the blinkin’ cussedness of things in general" at the expensive of the four brilliant amateur sleuthhounds.

In summary, Ask a Policeman is a fascinating experiment, but one that derives its interest mainly from watching a troop of famous detectives taking a stab a the same murder case and how they behave when someone else is in charge of them – while the murder at the summer retreat quickly lost its appeal by a abundance of coincidences and a lack of overall consistency. It's not the howling success that their first round-robin novel, The Floating Admiral (1931), was, but if you're a fan of any of these writers or characters the book is well worth your time – and it's one of those rare crossovers that gave me that pleasurable tingle down my spine! I love and adore crossovers and it gives me an immense pleasure knowing that Mrs. Bradley, Sheringham, Wimsey and even Sir John inhabit the same universe.
A note of warning: avoid the recent reprint by The Resurrected Press who took gross liberties by altering the text. More details here.
Geplaatst door TomCat on 7/06/2011