Over the past few years, I've read four novels by Roger Ormerod, a jack-of-all-trades and second-string mystery writer, who evidently tried to find a balance in his stories between the traditional detective stories of yore and the contemporary, character-driven crime novels of the 1970s, '80s and '90s – which he did with various degrees of success. So it's understandable why Ormerod hasn't stood the test of time and is not as well remembered today, but locked room readers should take note of him. Ormerod was not impartial to the locked room mystery and, when it came to manufacturing miracles, he was not bereft of talent either! 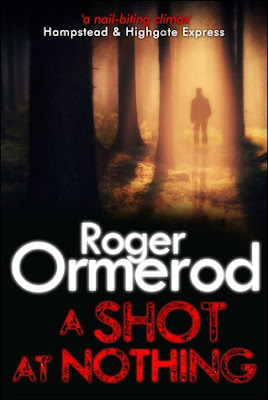 The Weight of Evidence (1974) is a little clunky, as a whodunit, but the synergy between the solutions to a strange disappearance from a construction shed and the discovery of two bodies in a bolted cellar room made for an original, one-of-a-kind impossible crime. More Dead Than Alive (1980) is a grand, old-fashioned and rambling detective novel littered with multiple, false solutions and a daringly original final explanation to the locked room problem. The Open Window (1988) is the weakest of the lot that withholds clues from the reader, but the locked room-trick still had flashes of ingenuity and probably would have worked better in a short story.

A Shot at Nothing (1993) is the third title in the short-lived Philipa Lowe and Oliver Simpson series and it's a more conventional, relatively simplistic, locked room mystery. But, in every other regard, it's his clearest written and most consistently plotted detective novel I've read to date.

Philipa Lowe is the daughter of Chief Superintendent Lowe and is somewhat of a "lady sleuth," having been "successful two or three times in sorting out other people's problems," who's currently in a relationship with a former policeman, Oliver Simpson – whose career ended prematurely with a shotgun blast. A Shot at Nothing opens with them haunting for a house and Philipa eye caught Collington House. An over sized bungalow with a sprawling estate with a hedge maze blocking the front door and the father of the present owner had the place "laced with alarms" connected "to the nearest police station." Surprisingly, the place is dirt cheap and she soon finds out why Oliver has his objections to the place.

During his time as an inspector in the district, Oliver had an illicit affair with the lady of the manor, Clare Steadman, who's currently serving out a life sentence for murdering her husband, Harris Steadman. Oliver happened to be nearby when the burglar alarm was triggered and dispatched to the house.

Six years ago, Clare and Harris had a spousal spat over money. Clare refused to cough up the money to pay his debts and he angrily stormed into the gunroom, where her late father's collection of valuable shotguns reside in glass cabinets, locking the door behind him. And through the locked door of solid oak, Harris began to taunt Clare, smashing the glass cabinets and flinging the guns through the french windows onto the lawn. Yelling how much "they'd be worth after a dose of rain." So she armed herself with two twelve-bore cartridges, ran outside and started tossing the shotguns back into the room, but Harris closed and locked the french windows. Clare picked up a shotgun, loaded both barrels and blasted the lock. 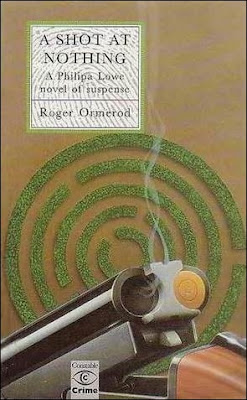 A shot that did three things: it jammed the lock, blasted a hole in one of the double glazed window and Harris was showered in glass splinters. Clare saw him through the hole in the glass, slumped against the wall, assumed he was dead and called the police, who were already on their way, but this is where the story begins to fall apart – because her story is that she fired one barrel outside. Harris was showered in glass, but what killed him was a second shot fired at close range. There were two emptied barrels in the shotgun and the spread makes it "damn near impossible" the second shot was fired through the hole in the window. Oliver found the door the gunroom unlocked, but what sank Clare was her insistence that she heard "an unexplained third shot." So, naturally, the police doesn't buy her story.

Oliver asks Philipa if she "could prove her innocence for her," which doesn't go over well, but she can't help being fascinated and in particular about that unnecessary, illogical third shot that went against all the evidence. Or how it can be linked to a shotgun missing from the collection. Not to mention whether, or not, the gunroom was locked from the inside. She knows that if "something happens that's illogical in the known circumstances" then "there have to be different circumstances in which it is logical," but this case is not going to be purely an intellectual exercise.

Clare is released early, out on a license, returned to her home when Philipa and Oliver were there, which made for an awkward reunion, but Philipa quickly realizes she's dealing with "quite a personality." She needs to break down the walls of lies and false fronts Clare had erected all around to get to the truth of those three mysterious shotgun blasts six years ago. Something that's easier said than done. Harris was despised in the district and Clare received a hero's homecoming complete with a village fête on the estate, but her first day back ends with another murder!

As stated as above, A Shot at Nothing is Ormerod's clearest, most consistently plotted and written detective novel with a lot to recommend to connoisseurs of the traditional, puzzle-oriented detective story, but there are one or two things that need a little nitpicking – mostly concerning the clash of the old and new school of crime-and detective fiction. Philipa and Oliver are a far cry from the bantering, lighthearted mystery solving couple found in Delano Ames, Kelley Roos and the Lockridges, but their relationship tensions and troubles were actually tied, or relevant, to the plot. So it didn't bother me too much. However, their characterization and Oliver's personal involvement showed Ormerod tried to frame the story as a modern crime novel/quasi-police procedural. I think this took away a little from an otherwise solid detective novel with some ingenious and inspired plotting.

The solution to the impossible shooting is at it's core an elaborate reworking of a locked room-trick vintage mystery readers have seen before, but it was very well done and expanded with all the confusing and complications surrounding the various shots. Solution to that third, unnecessary shot was a clever touch and gleamed with the ingenuity, but not as much as the unexpected and surprising truth behind the second murder. The original motive behind this murder elevated the whole story to something worthy of the great mystery writers of the past. I can easily imagine Brian Flynn pulling a stunt like this and made up for some minor smudges on the plot. Such as the vague and obscure clue to the motive for the first murder or not treating it as a locked room murder until very late in the story.

But when you take A Shot at Nothing as a whole, it's only true flaw is that it was published in 1993 and not 1933 or 1943, because it would likely have been better and more fondly remembered by locked room readers and classic mystery fans. A highlight of an otherwise meager decade for good, old-fashioned detective fiction.

On a final, related note: A Shot at Nothing has convinced to return to Ormerod before too long and see what he did with his other locked room and impossible crime novel, which all have intriguing sounding premises. A man is shot and killed in A Spoonful of Luger (1975), but the gun was locked in a box and the victim had swallowed the key. One Deathless Hour (1981) has two murders, miles apart at the end of an hour's drive, but carried out with the same gun and within minutes of each other. And Hope to Die (1995) tackles the classic murder in a locked library scenario. There possibly more of them hidden among his various series and standalone novels. I'll find them, if they're out there. To be continued...