The Cabinda Affair (1949) by Matthew Head

John Canaday was a World War II veteran, educator and had a two-decade long career as the leading art critic for The New York Times, but more importantly, he wrote seven crime-and detective novels – published between 1943 and 1955 under the penname "Matthew Head." Four of those novels feature his series-detective, Dr. Mary Finney, who's the American Miss Marple of the missionary brigade in the Belgian Congo. 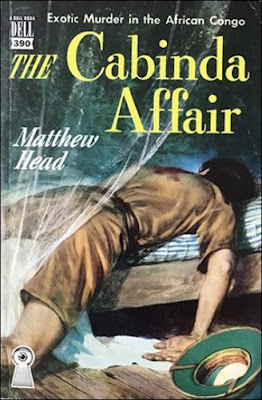 The Cabinda Affair (1949) marks the second appearance of Dr. Mary Finney and Hooper Taliaferro (pronounced Tolliver), but she spends 2/3 of the story listening to Hooper's recounting his recent Cabinda adventure.

Hooper has remained in the Belgian Congo following the events recorded in The Devil in the Bush (1945) and now works for a US government agency called the War Contracts Settlement Commission (WCSC). His latest assignment brings him to a small, hard-to-reach town of a Portuguese enclave, Cabinda, that's "old as towns go" in those parts, but its appearance "screamed aloud for a watercolorist." Cabinda is dotted with boxcar-like, candy-colored houses with false-front type, like an old American western town, "except that they had all been painted in these soft Easter-egg shades of blue and vermilions and creams and gray-lavenders and whites" – trimmed in contrasting colors. Hooper is deployed to this enclave to help settle "one of those good will contracts" worth four million dollars! That's an awful lot of goodwill.

During the war, the US was very anxious for Portugal to stay neutral ("so was Portugal") and the generous contract was a friendly gesture from Uncle Sam to the Portuguese, but the war is over. And they don't need the overpriced mahogany anymore. Since there had already been two long extensions on the date of delivery of the first load, the contract only has a week left before it becomes cancelable.

Hooper is accompanied to Cabinda by a lawyer and troubleshooter, Cotter, who arrived sick as a dog, but what concerned Hooper more is his boyish, movie-star good looks. Not without reason when their business dealings begin to blend with the domestic affairs of their shady host, Falcão. Falcão is a stockholder and local manager of the Companhia Khaya who lives in Cabinda with his young and beautiful wife, Ana Falcão. She has a mesmerizing effect on Hooper and Cotter. Falcãos also have two children. A 17-year-old daughter, Maria, who's an innocent, frail-looking beauty with a humped back. Henriques is her old brother and he would be rather back in Lisbon than running the logging camp. Lastly, there's a disreputable lawyer, Maximiano da Cunha, and a nosy wood importer, Pete Caulsworth-Bigg.

So the business end of their meeting gets quickly mixed up with the personal and Hooper, while sick  with fever, witnesses several things he was not supposed to see. This culminates with him finding a body in the adjacent room with a knife wound before passing out again. 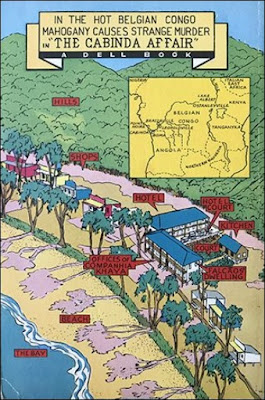 Miss Finney listened to the whole story and called his mental processes and powers of observation "an exercise in the distortion of obvious fact by the application of sentimental prejudice," because things happened right under his nose without catching on "anything's happened at all" – which is the crux of the plot. There aren't any physical clues to examine with the truth being hidden in the psychological makeup of the suspects. What they see or how they behave holds the key to the solution. Something that would not have been half as difficult had Hooper not wrongly interpreted everything he saw and heard, but it's a clever play on the unreliable narrator by using "a sentimental fool" with tropical fever.

Despite the African setting, the character-driven plotting and storytelling places The Cabinda Affair, weirdly enough, among the novels of the uncrowned British Crime Queens like a Moray Dalton or Maureen Sarsfield. A final flick of the knife gave the solution a twist justifying its inclusion among the Crime Crimes (crowned or uncrowned). There is, however, one noticeable difference. While the character-driven plotting and storytelling is very reminiscent of the Crime Queens, the tone is not as polished or sophisticated. I suppose most you go, "oh, no, the book takes place in Africa," but don't worry, it's not rampant, colonial-era racism. It's actually the opposite. The Cabinda Affair has some passages that you expect to find in a modern crime novel instead of a vintage detective story from the late 1940s. And in this regard, the frank, open-minded Miss Finney stands closer to Gladys Mitchell's Mrs. Bradley than Agatha Christie's Miss Marple.

The Cabinda Affair began with Hooper doing all the talking, recounting everything that happened in detail, but Miss Finney began asking questions as the story progressed and under her scrutiny everything Hooper assumed was "pretty obvious and logical" began "to stop making sense" – exposing that case was not closed. So she accompanies Hooper on a return journey to Cabinda where she effectively destroys a criminal scheme and reveals a murderer who's both surprising and obvious, which revealed another clever aspect of the story. The Cabinda Affair is mostly a decent, character-driven crime novel leaning a little too heavily on the colorful setting, but there's another layer to the plot Head used to give a satisfying twist to Miss Finney's explanation that elevated it to a genuine detective novel.

So, yeah, The Cabinda Affair is a little out of the ordinary for a 1940s whodunit with clashing contrasts between tone and style, but Head made it work and it's an accomplishment to come up with a gracefully simple twist that upgrades a plot from decent to quite good. Recommended! And I'll be moving Head's The Smell of Money (1943) and The Congo Venus (1950) to the top of my wishlist now.