In the Line of Duty

"Ideals come to torment us all at some stage, or at least they should do."
- Chief Inspector Morse (Inspector Morse Series 5, Episode 1: Second Time Around, 1991)

Major Sir Henry Lancelot Aubrey-Fletcher, 6th baronet, served in both World Wars with the Grenadier Guards and was Lord-Lieutenant of Buckinghamshire from 1954 to 1961, but the common plebs, like ourselves, probably know him best for his detective stories – all of them published under his penname of "Henry Wade." The detective novels and short stories, published under that byline, are held in high regard by pretty much everyone.

Until now, my only exposure to Wade had been one of his standalone mystery novels, Heir Presumptive (1935), but I kept coming across enticing reviews and readers of this blog have recommended his work to me in the past. I had planned to resume my reading with Wade's penultimate novel, A Dying Fall (1955), but Kate, of Cross Examining Crime, beat me to it (read her review here). So I decided to track down one of his promising-sounding titles and I can tell you that the subject of this blog-post will make an appearance on my best-reads of 2017 list!

Constable, Guard Thyself (1934) is the fourth book about Wade's series-character, Detective-Inspector John Poole of Scotland Yard, and is an early predecessor of the modern-day police procedural. However, the plot of the story consists purely of Golden Age material and can even be considered as a locked room mystery! Granted, the apparent impossibility was the unfortunate byproduct of the murderer's attempt to engineer "an unshakable alibi," but the fact remains that the book ought to be acknowledged as a locked room novel.

So I took the liberty to initiate the book in this beloved sub-genre or ours and labeled it as an impossible crime story. Anyhow...

Constable, Guard Thyself has a fascinating background, a police station, situated in a fictional town, Brodbury, where the policemen who are stationed there become implicated in a murder investigation when their very own Chief Constable is murdered – shot to death, in his own office, inside the police station!

Twenty years previously, the town was suffering from "a severe epidemic of poaching" and Captain Anthony Scole had been appointed to the Chief Constableship in order to "smash the poaching gangs." Captain Scole had earned a fearless reputation during a five-year stint as a policeman in an unruly corner of India, but his efficient reorganization of the local game keepers had only reduced poaching. Not stopped it. What he needed was to make an example out of someone and this opportunity came when an ambush of three poachers ended with the accidental killing of a game keeper.

Nevertheless, Captain Scole insisted during the trial that the shooter, Albert Hinde, deliberately pulled the trigger and the accused was subsequently sentenced to death. Hinde's brother, a mere youngster, and a friend received five years as accessories. When they were released from prison, they enlisted in the army and were killed during the Spring Offensive of 1918 in Northern France. Ironically, Hinde, who was supposed to hang, had his sentence commuted by the Home Secretary on "possible grounds for doubting premeditation" and was kept safely behind bars. Hinde was released from prison twenty years later and he had not forgotten about the Chief Constable of Brodbury.

A much older and wiser Captain Scole did not feel "quite as happy as he had at the time" about the conviction he had secured, which effectively ended the poaching epidemic in his district.

But regret over his past, somewhat misguided, idealism does nothing to quell Hinde's resentment or prevent him from being harassed by the ex-convict. One evening, while traveling homeward, Captain Scole has a brief encounter with Hinde and on the following day he receives a threatening letter, which promises that the next time "the judge puts on the black cap" it will be for something he has actually done – suggesting he might take a crack at the Chief Constable. Alas, the fact that the Chief Constable was surrounded by policeman proved to be insufficient protection against an assassin's bullet and his body was found slumped over his desk with a bullet in his head.

A nation-wide police alert goes out for Albert Hinde and the situation appears as if his capture would bring the case to a close, but the acting-Chief Constable, Superintendent Venning, is prodded into asking the Yard for assistance. And that brings Detective-Inspector John Poole into the fray. Poole methodically begins to separate the facts from the red herrings, which makes for a well-written, pleasantly paced and clever police procedural with classical detective plot.

One of the complicating factors requiring Poole's attention is an anonymous letter hinting at a streak of corruption, and even blackmail, running through the Brodshire Constabulary. A "dirty piece of scandal" pertaining to a clothing manufacturing firm bribing an official, at the Brodbury police station, to give them "the figures tendered by competing firms" and place a sealed bit of their own – which is slightly lower then the bits by their competitors. So they always landed the "profitable contracts" to dress His Majesty's constables.

This opens the possibility that the murder was an inside job. Only problem is that the circumstances of the murder demonstrate that the shooting was very difficult to pull off, whether the murderer came from within or from the outside, which is where the impossible angle comes into play. However, it only becomes apparent how much of a locked room problem Captain Scole's murder really was until Poole explains how it was done. As noted at the start of this review, the impossibility is a side-effect of the murderer's main objective, creating "a cast-iron alibi," but the trick is not bad at all and shows some ingenuity. Such as the significance of the clue of "a piece of powder-scorched leather." Even if that particular clue was given (too) late into the story. Still, why the murderer needed a piece of leather in a gun murder was very clever and practical. Not something I have seen before. So there's that. 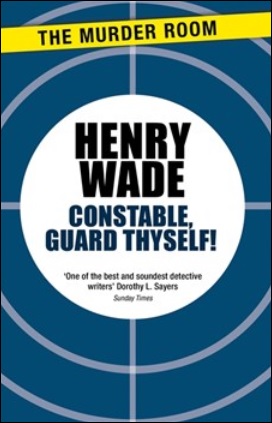 But what I really admired about Constable, Guard Thyself is how Wade, early on the story, gave the reader pretty much the raw, unprocessed truth behind the impending murder of Captain Scole, but how everything stuck together proved to be a different story altogether. And putting together a coherent picture of the crime required some genuine detective work on the part of Poole. So, yes, you can probably spot the murderer in the early stages of the story and that could have easily been a fatal flaw in the plot (c.f. J.C. Lenehan's transparent The Mansfield Mystery, 1932), but Wade kept this reader interested throughout the story with reconstructions, developments, diligent detective work and a cast of varied and engaging characters. I would rank Poole among those engaging characters. He might have been somewhat of a colorless personality, but he pleasantly reminded me of Freeman Wills Crofts' Inspector French.

And then there's the most fascinating aspect of the story: the emerging importance of the Great War of 1914-1919 and how the events on the battlefield proved to be of great importance to the murder of Captain Scole. I have often professed my love for detective stories, with plots, that lean heavily on the World Wars, but there only precious few that incorporate the First World War. There's a Harriette Ashbrook A Most Immoral Murder (1935), originally titled He Killed a Thousand Men, and a short story, Laurance Clarke's "Flashlight," which was actually published in 1918, but there's not much else in this category.

So I welcome Constable, Guard Thyself as an excellent addition to this lamentably short list of WWI-themed detective stories and it has convinced me that there's no excuse to not further explore Wade's output. He evidently knew how to handle a twisty, complicated plot and have been told in the past that the First World War hangs like a ghost over a number of his detective novels, which now has really caught my attention. I might return to Wade sooner rather than later. Any and all recommendations are welcome.

Well, thus far this hastily written, banged-out review. Not sure what's next on the list, but there's another (promising) impossible crime novel on the big pile. On the other hand, I also want to return to Case Closed and the animated Kindaichi series. So we'll see what turns up on this blog next. So don't touch that dial!
Geplaatst door TomCat on 9/02/2017