"That was then, this is now, and nobody knows what tomorrow will be. That's the way things are, whether we like it or not."
- Sam Diamond (Murder by Death, 1976)

After tailing John Quincannon and Sabina Carpenter through San Francisco of the late 1800s, I wanted to return to The Nameless Detective, operating in the same area as his professional ascendants, but the places depicted in Bill Pronzini's Breakdown (1991) continue to teem with crime over a century later. 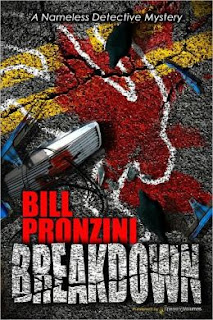 Nameless is on an undercover assignment that requires him to mingle with the patrons of a neighborhood watering hole, The Hideaway, which is a safe port in the storm of everyday life for an eccentric collection of regulars – tolerating intruders without encouraging them. The regulars are societies cast-aways passing the time with playing chess, telling jokes and stories or simply enjoying a drink (i.e. social solitude). One of the patrons, Nick Pendarves, witnessed Thomas Lujack driving a car over one of his business associates and the defense has hired Nameless to keep tabs on him.

The close-knit community that makes up The Hideaway and the ambience of the tavern is starting to have its effect on Nameless, who's still coming to terms with a trauma sustained in a previous outing and coping with a new strain on his relationship with Kerry Wade, until one evening, Pendarves storms into the place claiming that Lujack tried to run him over – swearing he'll deal with Lujack himself. More problems on the horizon for Nameless as the case starts gaining momentum.


The investigation ties Lujack's cardboard factory with the employment of illegal immigrants, which, in turn, is tied to human trafficking and key figures that simply decide to disappear. One of them is even murdered in Pendarves garage, gassed to death, but the man himself is nowhere to be found and more bodies turn up – with one of them almost being Nameless himself. There are, of course, the personal storylines plaited through the plot of Breakdown, which consists of changes in personality and anxiety attacks stemming from Nameless' ordeal in Shackles (1988) and Kerry's mother is mentally deteriorating and badly needs looking after. And you know Nameless is still rattled when he talks you through 230 pages without a single mention of his pulp collection!

Breakdown is another compelling chapter in the ongoing biography of a private-eye, but the slow moving opening chapters and setting had me believed that Pronzini was making an attempt at modernizing and transplanting the Euro-continental whodunit to the US. Pronzini varies the style of the series to keep it fresh and interesting to write, which made it a possibility, and how can you not imagine a pipe-smoking Frenchman listing to the name Jules Maigret or the dour looking Oberinspektor Derrick (*) of the Munich police (hey, the place is called The Hideaway!) sitting at the bar with the same purpose as Nameless?

It had that kind of atmosphere and assumed that was the direction the story was heading, before turning into a straight up crime novel and I can't help but feel out of my debt when reviewing them – 'cause they tend to end up as brief plot outlines with some added commentary (not always the case with the more whodunit-oriented stories). But I can't help that I like what I like, and with that being said, I like Nameless and it's never a chore to tag along with him on a case.

The books I have reviewed in The Nameless Detective series: