Kelley Roos' Scent of Mystery (1959) is an incredibly slender, one hundred and twenty-eight page counting booklet-ish looking novella that has a unique back-story.

The mystery writing husband-and-wife team of William and Aubrey Roos, writing under the joined pseudonym of "Kelley Roos," basically novelized a screenplay based on one of their own novels, Ghost of a Chance (1947), but the big screen adaptation only carried a ghost of a resemblance to the original plot. However, the most salient aspect of this story is that Scent of Mystery was one of the first (and last) experiments with Smell-O-Vision, which attempted to create a complete viewing experience by releasing timed odors into the movie theatre.

I think this is why the script writer, William Rose, changed the murder from the book by electrocution on a subway track to a hit-and-run in the streets, because there's no way they would've gotten permission to have Southern barbeques in cinemas across the land. 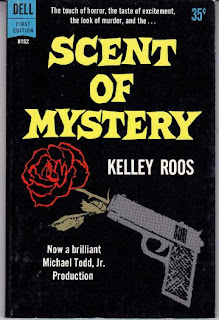 Jeff and Haila Troy were scrubbed from Scent of Mystery and the scenery has drifted from the Big Apple to Spain, where Oliver Larker is spending a well-deserved holiday when a disembodied voice from a sentry box barks a warning at him – a woman is about to be murdered who's too beautiful to die. The voice to meet him at Bar Colombo within half an hour, but there's a note waiting there with a request to go the fountain park, however, there's only a crowd there huddled over a man in the street. A victim of a hit-and-run and Larker recognizes him from the bar, but discovers no more than a nickname, Johnny Gin, to go on to find a woman marked for murder.

The opening of Scent of Mystery is fairly close to Ghost of a Chance, with its mysterious warnings and deaths in traffic after following up on a note left at a bar, but if you're familiar with the source material you can recognize its skeleton structure through out the story. And in some parts, they were more obvious than in others. There's one chapter in the book that's a complete rewrite of a scene from Ghost of a Chance, in which our heroes get trapped in a house with an incredible, but short-lived, disappearance mystery ("a woman couldn't disappear into thin air from a sealed shaft of a dumb waiter... this was the twentieth century... this could not happen."), but it was too short (one page) and too simple to tag this post as a Locked Room Mystery.

If anything, Scent of Mystery is a chase-thriller with detective interruptions. There are clues and red herrings, but these are picked up as Larker scoots across the landscape in Smiley's taxi – a menace on the road who was played in the film by Peter Lorré. They find enough women who are too beautiful to be killed, many dead ends and have to dodge a few bullets in order to safe their unknown quarry. Larker and Smiley also gave the Rooses an opportunity to give some of the dialogue their famous comedic touches.

All in all, Scent of Mystery was a fast-paced and fun thriller to read, but as a detective story it's only an interesting curiosity because the clues in the story were odor-based and clearly written for Smell-O-Vision. The book also includes several black-and-white movie stills with captions like the opening of an Ellery Queen episode ("the mysterious woman on the right doesn't know it, but somebody's marked her for murder"). So definitely an item of interest for fans of Kelley Roos and movie aficionados.

Note for the curious: As you know, Kelley Roos was the penname of William and Aubrey Roos, but the funny thing is that their surname means rose in Dutch. And who scripted the movie? William Rose! That means twice two men with pretty much the same name rewrote the same story. Why does reality never get any flack for these unbelievable coincidences?

Oh, and the post title comes from a Scooby Doo episode. That was all I could think of.
Geplaatst door TomCat on 7/27/2013