Sleightly Invisible (1986) by Patrick A. Kelley

Back in March, I reviewed the third novel in Patrick A. Kelley's short-lived Harry Colderwood series, Sleightly Lethal (1986), which comprises of five novels about a poor, down-on-his-luck magician who moonlights as a private detective with the characters and milieus fitting the fan-and popculture themed mysteries – which proliferated during the 1980s. A period highlighted in my review of Anthony Oliver's The Elberg Collection (1985).

There are, however, two big differences between the Harry Colderwood books and other fan-and popculture themed mystery novels from that decade. 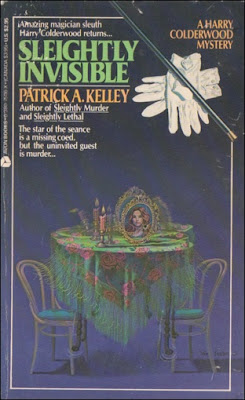 Firstly, Kelley's plots tend to be razor thin with very little adherence to the traditional detective story and appear to lack any interest in developing (new) locked room/impossible crime ideas, which marked these eighties reimagining of the fair play detective story. Such as Bill Pronzini's Hoodwink (1981) and Richard Purtill's Murdercon (1982). Secondly, Kelley obviously wrote this series with a TV deal in mind with the stories designed for small screen adaptation. From the uncomplicated, easy to follow plots to the not quite stock, but still colorful, characters (clowns, psychics and magicians), settings and scene-driven narratives. The series was written like an '80s crime drama and it would surprise me if it wasn't shopped around the networks.

So the books are fast and fun to read, but the plots won't leave a lasting impressi on on you. This was true for Sleightly Lethal and it will be the same story with Sleightly Invisible (1986).

Sleightly Lethal attracted my attention with its intriguing cover and brief plot description, "it was murder, not magic, that put a dead clown in a locked safe," but it couldn't be further away from an impossible crime and Sleightly Invisible promised one of those séance mysteries with a missing coed as "the star of the seance" – murder is "the uninvited guest." So, in combination with the suggestive cover, it was not unreasonable to expect something in the spirit of John Sladek's Black Aura (1974) or Peter Lovesey's A Case of Spirits (1975). Well, that wasn't the case. Oh, there were fraudulent psychics with an ending staged around a séance, but, by that the time, the story had morphed into something more in line with Sharyn McCrumb's Bimbos of the Death (1987). Cover and short synopsis were made and worded to sucker in readers like me.

The story opens with Harry Colderwood performing street magic on the sidewalks of small, entertainment starved town, where he was passing through when his van broke down, but his act is sabotaged. And the culprit is his old nemesis, Birch Osborne. An ex-mentalist who, ten years ago, came very close to cashing in on Colderwood's $10,000 open challenge "to anyone who could demonstrate paranormal powers." Osborne had mocked "the laws of probability to the tune of three million to one," under close scrutiny of witnesses and cameras, when he named every card in a shuffled ESP deck in the exact order. For a whole day, the newspaper had celebrated Colderwood's defeat and it had taken him that much time to duplicate the mind reading stunt, which allowed him to stop payment on the check.

But while Colderwood's career went into a tailspin, Osborne won the lottery and voluntarily withdrew from the spotlight to live under his real name, James Cassileth, as a financial adviser. Now someone is trying to pin a serious crime on him.

One week before, a grad student in psychology, Chana Coolidge, had been kidnapped from her college library and clues were scant, but the story really heated up when her father arrived in town with his own hired help, Virginia Porter – an old and experienced hand at the psychic game. She brought her assistant and background investigator, George Zimbardo, who unearths "scraps of information that Porter can pretend to have psychically divined." Porter gave a TV interview in which she gave an uncharacteristically detailed description of the kidnapper. A description of Osborne and there are more clues that someone is trying to lead the police to his doorstep.

Osborne was very persuasive in convincing Colderwood to take the case and he discovers two important things: Chana's was doing a class project on behavior modification with the "ironclad stipulation" that "the subject of the experiment must be informed that he is the subject," but Chana had confided to her professor that she hadn't informed her subject. And now she was afraid of him. She had only submitted the title of her paper, The Game Player. Second thing coming to his attention is an experimental new hybrid game, Ultra, combining "the strategy of board games with the physical skills of sports" with costumed players being chased through a maze, based on computer-fed commands, while "shooting at each other with infrared-emitting gun" – dressed in the aesthetics of a fictitious fantasy series, The Zon Universe. So pretty much a cosplay version of 1980s Photon Laser Tag.

Admittedly, the internet aspect of the game seems a little ahead of its time, but suppose it was possible with sending short text commands and the maze provided the story with two of its best set pieces. Colderwood decides to investigate the Ultra game after closing hours and ends being chased through the maze by someone in lizard suit and a very real gun. Later he decides to stage the séance there, but more than that can't be said about the plot. Simply because there's not much more to tell.

You barely notice how little movement there's in the plot and even a late murder of an important character (shot with an arrow) goes by practically unnoticed, because you'll have reached the ending when you finally catch on how threadbare the plot really is. So he definitely knew how to tell a yarn and showed he understood with plotting with the clues he planted that hinted at what was happening, and why, but choose to keep things as simple and uncomplicated as possible. One of the reasons why I suspect he wrote the series with a TV deal in mind and perhaps knew the 1970s Ellery Queen TV series was canceled because (according to co-creator William Link) was too complicated for its own good. So he went in the opposite direction. I wonder if the failure of NBC's 1986 Blacke's Magic spoiled things for Kelley and Colderwood.

So, on a whole, Kelley's Sleightly Invisible was not necessarily a bad read, but it was very bland without anything to recommend unless you have a special interest in fiction featuring magic and magicians. I can also imagine people who grew up during the '80s and were deep into some kind of fandom/culture would get a nostalgic rush out of this series. Everyone else is advised not to break their piggy bank to obtain copies.

Email ThisBlogThis!Share to TwitterShare to FacebookShare to Pinterest
Toe-Tags: Patrick A. Kelley, Post-GAD