Bill Pronzini and Jeffrey Wallman's "The Half-Invisible Man" was originally published in the May, 1974, issue of Ellery Queen's Mystery Magazine and reprinted in Cop Cade (1978), but the story never made an appearance in any of the locked room-themed anthologies and there's more than enough here to merits its inclusion in a future anthology – not merely for its locked room-trick. "The Half-Invisible Man" has one of the most memorable, one-shot detective characters. 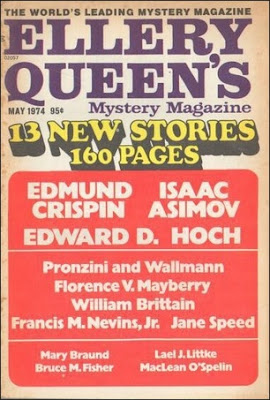 Patrolman Fred Gallagher is the half-invisible man of the story. A 50-year-old, 27-year veteran of the force, but he was "a quiet, passive, deferential individual by nature" with "the kind of mind which did not easily assimilate academic knowledge." So he never got promoted and this turned him into an "uninvolved, perpetually detached observer" who feels like he has done little more during his career than standing guard at crime scenes. Where he glimpses through doorways "every conceivable type of crime man could perpetrate against his fellowman." A half-invisible man.

"The Half-Invisible Man" opens with Gallagher posted outside the open door of Room 103, in the fashionable Whitewater Motel, listening to his superiors discussing the murder Aaron Maddox. A hotel guest who had been shot ten minutes after he had checked in, but every door (two) and window was securely locked, or bolted, from the inside and the gun was found outside, on the terrace, the locked glass door – wiped clean. An impossible crime if there ever was one!

There are, however, some suspects to consider. The occupant of the two room adjacent, Gordon Severin in 105 and Ralph Oakley in 101, who are partners in a small New York investment counseling firm. Maddox was the third partner and he had placed Severin and Oakley in enviable position by siphoning money from their clients and firm, which brought one of their clients to the hotel to confront the trio. So more than enough suspects with a motive, but they first have to figure out how the murderer got out of that locked motel room.

While his superiors go over all the details, Gallagher begins to see a pattern and, when he has a moment alone, he gets an opportunity to confirm his suspicions and presents Lieutenant Conroy and Captain Fabian with a complete solution to the locked room problem upon their return. A very good, fairly clued explanation offering a new variation on an old, somewhat famous trick, but the story is so much more than a well executed detective and locked room story – because there's a surprisingly deep and satisfying layered feeling to this short story. There's the inversion on the armchair detective reminiscent of Henry from Isaac Asimov's The Black Widowers series. An armchair detective who stands, waits and listens quietly as he puts together the pieces in his mind, which worked just as well with a patrolman as with a waiter. Secondly, there's the rather tragic character of Gallagher himself. Even with his short-lived moment of glory, "The Half-Invisible Man" is a synopsis of his past, present and future. A half-invisible man who was looked at without being seen and destined to one day completely vanish. And that also makes it one of the best takes on G.K. Chesterton's "The Invisible Man" (collected The Innocence of Father Brown, 1911). A depressing take, sure, but seldom done better.

"The Half-Invisible Man" is a fine example of how the traditional, plot-oriented detective story/locked room mystery can be merged with the modern, more character-driven police procedural and they can compliment each other in the right hands. Definitely recommended. Hopefully, it will turn up in some future locked room anthology for my fellow impossible crime junkies to enjoy.
Geplaatst door TomCat on 11/25/2020