Portrait of a Murderer (1933) by Anne Meredith

Lucy Malleson was a fertile mystery novelist best remembered today as the author of the long-running series about a morally flexible defense attorney, Arthur Crook, published under her most well-known pseudonym, "Anthony Gilbert," but there were two other pennames that have fallen into obscurity – namely "J. Kilmeny Keith" and "Anne Meredith." Between 1927 and 1935, Malleson produced ten novels, as Keith, featuring a Liberal MP, Scott Egerton, as the series-detective. Egerton was abandoned as soon as that rogue elephant among lawyers appeared on the scene. 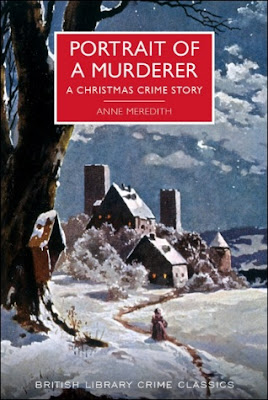 The name Anne Meredith mainly appeared on the covers of Malleson's straight novels, twenty in total, but there was a dark, highly-praised seasonal crime novel published under the Meredith byline.

Portrait of a Murderer (1933) was praised by Dorothy L. Sayers as a "powerful and impressive" story with a "tragic quality," while Carolyn Wells called the book "a Human Document" crammed with "interest and personality." Regardless of their praise, the book was soon forgotten and remained in complete obscurity until it was republished in 2018 by British Library/Poisoned Pen Press.

Portrait of a Murderer is with its emphasis on psychology, instead of detection, not your typical 1930s Golden Age detective novel and the story can best be described as the mirror opposite of Philip MacDonald's experimental detective novel, The Maze (1932) – in which any hint of characterization was barred from its pages. The characters only appeared as names in a court transcript. But, from the very first page, Portrait of a Murderer sets off in the opposite direction with character exploration supplanting the detective work.

The story begins with a brief announcement that the life of an elderly curmudgeon, Adrian Gray, ended violently at "the hands of one of his own children" at Christmas, 1931. An "instantaneous and unpremeditated" crime that left the murderer as "incredulous and dumb" as the victim.

After this primer, the story goes back a day to introduce the various relatives of Adrian Gray arriving at their ancestral seat, King's Poplars, which painted a picture of a family that "had come down in the world" as the cost of the modern world had rapidly evaporated their old money – forcing them to part with much of their property. Once life in the village had centered round the stately manor house and now it "swept past its doors." Even the family had broken up with many of them migrating to the towns or going abroad. The "generations of Grays" littering the churchyard would have scarcely recognized their descendants and would have been "reluctant to acknowledge their kinship," because they're either broken husks of human beings or up to their eyeballs in trouble. And three of them have come to ask Adrian for money.

Richard is Adrian's eldest son and an ambitious politician, who has invested a lot of time and money in obtaining a peerage, but now he's being blackmailed by his mistress for "an absurd sum." Hildebrand is one of Adrian's more troublesome sons, a passionate artist, who wants to money to escape from his harridan of a wife and scraggy-looking children. Some of whom aren't even his own. Eustace Moore is Adrian's son-in-law and a well-known financier, but his financial schemes is about to place him in the docks and desperately needs ten-thousand pounds to straighten things out. Only problem is that he also lost a lot of Adrian's money!

However, with exception of the murderer, these character portraits are, for someone who prefers plot over characterization, quite unnecessary. The only characterization that has any relevance to the story is that of the victim and his killer.

All of that being said, I thought the two-tier aftermath of the murder was very well done and fascinating to read. Firstly, you have the murderer's journal, whose name will not be revealed in this review, in which he detailed what happened directly after he struck down his father and his reluctance to forfeit his life on account of his father – whose life he considered to be "quite worthless." And the steps he took to lead the trail away from himself. Secondly, there's the discovery of the body on Christmas morning and how the family responded to the news.

Unfortunately, there was very little in the remainder of the story that held my interest with exception of the snippets of social commentary and the unsettling portrayal of the murderer's squalid home life, which included child neglect and outright physical abuse. Something you rarely find in a Golden Age mystery. Towards the end, there was a spot of detective work, in order to wrap up the story, but reader already possessed all of the answers. So there was nothing to sink my teeth in and all the characterization, of even minor characters like Sergeant Ross Murray, just felt like padding to me.

I've to be honest here and acknowledge Portrait of a Murderer is not my kind of crime fiction, which negatively tainted this review, but I couldn't help but think how much better this psychology-driven, character-oriented crime novel could have been had there been an element of mystery about the motive – a mystery along the lines of "Rosebud" from Citizen Kane (1941). During their stormy argument, Adrian Gray could have uttered a cryptic remark or word that made his son pick up a paperweight and swing at him in blinding anger. This would place the reader in a position to piece together the significance behind that cryptic and deadly remark. I think this could have made it one of the few truly classic whydunits.

So, on a whole, I can't say I particularly enjoyed my time with Portrait of a Murderer, but keep in mind that my personal presence strongly lies with the labyrinthine-like detective story and my personal dislike for character-heavy crime novels takes nothing away from Malleson as a talented writer. I just prefer her Arthur Crook mysteries. However, if you want a second-opinion, Kate, of Cross Examining Crime, positively reviewed the book some years ago.

A note for the curious: coincidentally, my previous read, Gerald Verner's Noose for a Lady (1952), contained a line that aptly described the story of Portrait of a Murderer: "A portrait of the murderer... not the portrait of a face, but the portrait of a mind — a mind that thinks and acts in a certain definite way." If I were still using opening-quotes, I would have definitely used it for this review.
Geplaatst door TomCat on 12/02/2019