The Art of Deception

"For in the long run, either through a lie, or through truth, people were bound to give themselves away..."
- Agatha Christie's After the Funeral (1953)

After a brief, unannounced leave-of-absence from this blog, I've been slowly picking up my normal reading pace and managed to finish My True Love Lies (1947) by Lenore Glen Offord in just a few days. And no, contrary to the title, it's not a sugary, one-note romance novel, in which true love stands as the sole survivor, but a bone-fide detective story by a writer who served as the mystery critic for the San Francisco Globe for three decades – and stood-in for Anthony Boucher whenever he was unavailable during World War II. 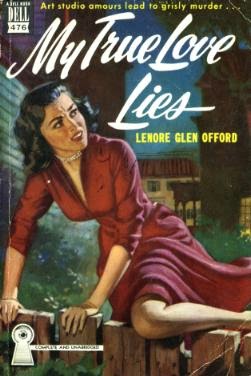 My True Love Lies is set in the year following Allied victories over the Axis powers in Europe and the Pacific, but civilian and military life is still entwined in the San Francisco of 1946. The streets are filled with navy uniforms and the story's protagonist, Noel Bruce, has a job as a government job as a paid driver while she studies (line-) drawing at the Sherwin Art School. Noel is also friends with a charming and good humored Navy commander, named Miles Coree, who came back to San Francisco to find his fiancée married to another man.

A great detective once observed artistic blood is liable to take the strangest forms and the body found inside an unfinished war sculpture, a clay model called "Woman at the Grave," can attest to that statement!

Offord is represented on my best-of list with The Glass Mask (1944), because it’s an excellent treatment of the "perfect murder" ploy without a cop-out ending and an example of the kind of detective stories American's weren't suppose to be writing at the time: the kind set in a small and sleepy country-side town in which time has crept forward instead of marched. My True Love Lies doesn't bat in the same league as The Glass Mask, but the writing plainly shows Offord knew her way around a plot.

The reader is constantly kept busy with mysterious developments and analysis's of the crime. There are crimes from the past lingering in the present and unknown pursuers are harassing Noel and the relationship between the different characters become more, and more, entangled. There are the "Five Scared Artists:" Noel, Anna Tannehill (it was her sculpture in which the body was discovered), Will Rome, Rita Steffany and Paul Watkins – who's inseparable from his cousin, Daisy. This lot is rounded out by the head of the art school, Eugene "Papa Gene" Fenmer, a brash reporter from the Eagle, Red Hobart, a derelict known as "Old Dad" and the ex-wife of the murdered man. And they all gravitate towards the scene of the crime.

Offord actually came up with a clever solution as to why the corpse was hidden in the clay model (other than dramatic effect) and there was a nifty double-twist at the end, which made My True Love Lies an above average mystery novel. It missed that special spark to make it really great, but it's definitely better than similar artsy-themed detective stories such as Dorothy L. Sayers' Five Red Herrings (1931) and Ngiao Marsh's Artists in Crime (1938).

In parting, here's a nugget of wisdom tugged away in the opening of the second chapter of My True Love Lies and reflects on the news playing up the Bohemian angle of the murder case: "Like many journalistic implications, these were partly true and mostly a long way from accuracy." We're almost a century removed from the publication of this book, but I'm afraid this little quote still holds some truth today considering you could make a special-edition DVD box-set for 3D home entertainment systems of the recent news coverage of the missing Flight 370 with downloadable content of Jesse Ventura taking the viewer through all the conspiracy theories.

Well, enough filler writing for one review and I'll probably grab a good, old-fashioned locked room mystery from the shelves for my next read.