Looking back at my review of E.C.R. Lorac's Fire in the Thatch (1946), I noted that, while it was a good read, I'd probably end up only remembering the story's depiction of post-WWII England and the same was true for the backdrop of Murder by Matchlight (1945) – which I read before this blog was flung on the web. Lorac obviously knew how to create an evocative surrounding and giving her characters a touch of life, but Rope's End, Rogue's End (1942) indicates Lorac also knew her way around an intricate tangle of plot threads. And is it any wonder the book secured a spot in Robert Adey's Locked Room Murders and Other Impossible Crimes (1991)? Anyhow, on to the review. 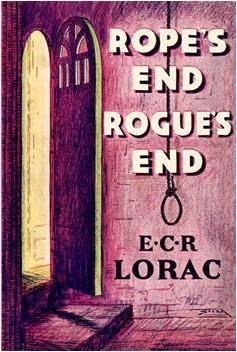 Wulfstane Manor is a mansion that served as a fortified holding in the days of the Plantagenets, but has remained untouched since Queen Anne's time and the place is beginning to show its age. Lorac's (almost) turns the old, creaking Wulfstane Manor with its faded and worn furniture in a character in itself: like a very old man sitting quietly in the corner and observing everyone around him. In this case, it's what left of the once wealthy Mallowood clan. The house now belongs to Veronica and her twin brother, Martin, who suffered from infantile paralysis as a teenager and is easily affected by stress, which is partly the reason why their father left them the house – and that caused a row and fall-out between them and their three brothers.

Richard is an adventurer and "brings back unknown primulas and new Tibetan poppies for wealthy gardeners to cherish," while Basil and Paul replenished the lost family wealth by becoming "city wallahs" in the finance sector. It has always been Paul's wish to restore the old family home, but there's a lot of bad blood between Paul and Veronica. And, of course, this family is reunited at Wulfstane the day before Paul leaves for a trip around the world. Nevertheless, he tries a last ditch effort to pursued his sister to sell the house and may even tempered with their already modest income to drive his point home (pun not intended, I swear!).

The exchange between brother and sister has all the courtesy of a meeting between two diplomats from the U.S. and Soviet Union during the Cold War: "How pleasant that we can both express our aversions in a manner so academic, Paul! As a family, our mode of speech is remarkably uncorrupted by either temper or jargon" replied with "Yes. There's still something to be said for breeding... we don't descend to face-slapping tactics in practice, whatever the trend of our feelings..."

Still, the reunion wasn't a complete disaster and a row was prevented, but the following day a gunshot is heard from the upper-floor and the solid, unyielding door to the disused playroom had to be forcefully broken open and what they found was the body of one of the four brothers – a sporting gun with a piece of string leading from his foot to the trigger. A simple and obvious case of suicide, however, loose ends brings Chief Inspector Macdonald in for consultation and begins to ask pesky questions.

Rope's End, Rogue's End is a legitimate locked room mystery and doesn't relay on the cop-out solution of the murderer dumping the key in the room after breaking down the door. I hate those. And, unfortunately, usually found in these second-tier mystery novels. However, the impossibility of the murder actually strengthened the plot of the story, because it's one of few aspects in the overall story that genuinely prevents a haughty armchair detective from being too clever and cute. I think everyone who has read a few detective stories intuitively comes up with the same solution, but, factoring in that two of the four brothers are out of reach (after the murder) and how everyone's movements played out really upset every possible variation of this solution I tried. It had to be right!

I also liked how the locked room problem was presented and treated: the victim was heard moving around in the playroom before the sound of a gunshot and the only escape the window provides is a thirty foot drop. The badly maintained roof is as impassable as a minefield and alternative solutions are discussed/rejected. The actual solution is fairly simple (in theory) in comparison with its presentation, but it's acceptable and original enough to not leave me disappointed.

That being said, Rope End's, Rogue's End is not completely flawless, but it's the best and most skillfully handled detective story I have read from Lorac thus far.
Geplaatst door TomCat on 4/08/2014