There are a number of impossible situations of the miscellaneous kind, such as trains being whisked away in between two stations or an entire house vanishing over night, but they are uncommon because they're hard to do convincingly – not to mention the lack of wriggle room for an original solution. The doppelgänger of folklore is another example of an inviting premise trammeled by a limited amount of options to work with, if the supernatural has to be kept outdoors. 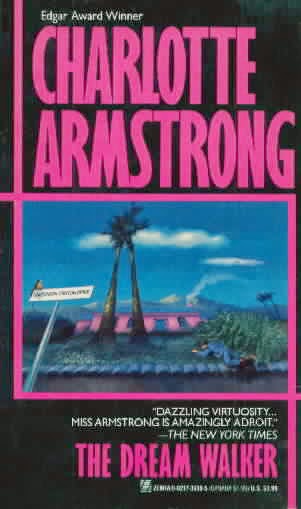 Helen McCloy's suspenseful Through a Glass, Darkly (1950) and Time Waits for Norman (1998) from the Jonathan Creek TV-series seemingly did everything that was (fairly) possible with the premise, however, Charlotte Armstrong found a nifty and clever way to extract some extra mileage out of the doppelgänger-ploy in The Dream Walker (1955) – which has also been published as Alibi for Murder.

Armstrong's twist lies in not coming up with a brand new solution to the problem, but showing the reader the ugly, plain woodwork behind the plot to assassinate the character of the respected John Paul Marcus. The reader knows from the offset who, why-and how and this makes The Dream Walker an inverted impossible crime story (another rarity), but the advantage is that the astral projection trick can be played up to full effect for story telling purpose. You're sort-of committing yourself with a locked room premise to deliver some kind of clever or original trickery at the end.

The Dream Walker tells the reader from the beginning Raymond Pankerman, third-generation millionaire, financiered the smear campaign against Marcus, after the latter alerted Uncle Sam of the illegal activities of the former, by offering a fat reward to Kent Shaws – brains of the outfit and slightly unhinged. Cora Steffani and Darlene Hite round out the team. Shaw's crazy scheme begins like a benevolent urban legend after Cora passes into a trance for the first time and dream walks. Miles away. Usually in another state of the country. There were even people who confirm to have talked to Cora while she was laying unconscious in another circle consisting of impeccable witnesses with no reason to lie.

While suggestions of an elaborate publicity stunt and "there are more things in Heaven and Earth" are being volleyed around, the reader can feel smug the entire time for knowing more than the characters trying to figure out what's happening. You're far more willing to go along with the insane scheme, because the inverted structure of the story makes the reader feel like a silent partner in the plot. You can simply sit back and look bemused at the unfolding events, complimenting Armstrong when she throws in an uncontrollable variable in the perfect plan of the foursome – forcing the dream walker to stumble over a body. It does, however, give the story traction in the press and Marcus eventually finds himself in a compromising position and nobody believes it when everybody swears, Marcus included, he didn't receive an envelope from the dream girl.

As noted in my review of The Case of the Weird Sisters (1943), it was Patrick, blogging At the Scene of the Crime, who propelled Charlotte Armstrong higher up my wish list (thanks!) and have to agree on two of his main points: it’s a strong statement against the witch hunts of the McCarthy-era and Armstrong knew how to pen a suspenseful story. Once again, this simple trick, made complicated for the sake of being complicated, worked admirably because of the inverted angle for the reader. The moment everyone in the story has figured it out the reader doesn't respond: oh, there were two of them, because that was never the point. Armstrong could focus completely on the characters and their exploits.

I have to add that I still think Patrick Quentin's Black Widow (1952) is the best persecution / suspense story of its kind, but The Dream Walker comes in as a close second. So I'll definitely be returning to Armstrong.

By the way, you can all be proud of me: I resolutely said no when a punning post-title, "A Trance-Continental Flight," suggested itself. None of that Tom Foolery on this blog!