Rummaging in the Past

The year 1920 is generally accepted as a semiofficial starting point for the Golden Age of Detective Fiction, which witnessed the debut of Agatha Christie and Hercule Poirot in The Mysterious Affair at Styles, and the rest, as they say, is history. During the same period, H.C. Bailey and one of his two series-characters, Mr. Reginald "Reggie" Fortune, were introduced in a collection of short stories, entitled Call Mr. Fortune (1920), and was the first of many popular and critically acclaimed mysteries from his hands – good and recognizable enough for Christie to spoof in Partners in Crime (1929).

Howard Haycraft noted at the time: "it seems safe to say that any impartial statistical poll of the sentiments of readers on both side of the Atlantic would assure a position high on the list to H.C. Bailey" and S.S. van Dine reputedly began to reshape Philo Vance in the image of Reggie Fortune, but, today, Bailey has (undeservedly) become a footnote in the genre’s history. 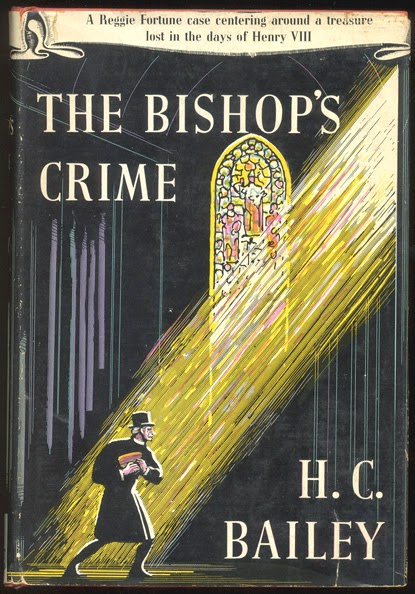 I say undeservedly based on a handful of novels, such as the excellent and reissued Shadow on the Wall (1934) and Black Land, White Land (1937) or the superb and sadly out-of-print The Sullen Sky Mystery (1935), with only The Great Game (1939) falling short of the mark – which is surprising considering it's a crossover of sorts. And I like crossovers! However, The Bishop's Crime (1940) proved to be a return to those earlier novels.

The cathedral village of Badon is the backdrop of The Bishop's Crime and dominating the horizon of the town is the historical tower of Badon Cathedral, known as "Jacob's Ladder," on which a previous prior envisioned angels ascending and descending from heaven, but the past keeps its hold on the place in other ways. There used to be shrine devoted to a statuette of the Virgin Mary, discovered by the founder of the church, a Saxon King, however, the treasure was reputedly lost at sea after Henry VIII claimed it – which begs the question if the relics were hidden before the shipping accident.

A historical subplot is briefly teased with one or two murders buried deep in the past of Badon, but they're left there and Fortune's expertise is called upon when the body of a burglar is discovered on a well-frequented road to London. However, it's not an accident and foul play is suspected. Fortune retraces the steps of the victim back to Badon based on the content of the stomach and analyzing the dirt found underneath his nails. There's another criminal element meeting an unfortunate end and it becomes obvious someone's hunting for lost treasure, but Fortune has difficulty getting a solid grip on the case.

It depresses and somewhat amuses Fortune as he pieces together a mosaic of slander clues, scattered across the centuries in Greek and Latin, to form a complete picture of the events that took place in Badon, and the Biblical references, lines of poetry, lost treasure and historic tie-ins makes The Bishop's Crime play out like a small epic. The resolutions, once again, reveals Fortune as an ancestor of Gladys Mitchell's Mrs. Bradley as he plays judge, jury and executions (by proxy) in meting out his own peculiar brand of justice for every guilty person involved in the case. That's interesting aspect of the "plump, drawling Reggie Fortune," who has no qualms about manipulating people into murdering each other in the pursuit of justice – much to the shock of Lomas ("My God!"). Still weird to think a TV-series like Dexter can be connected to H.C. Bailey, Gladys Mitchell (Speedy Death, 1929) and Rex Stout (Black Orchids, 1942 and "Boody Trap" in Not Quite Dead Enough, 1944).
Finally, I realize my review has been rather summary and lacking detail, but that's because there were gaps in reading the book, nonetheless, I enjoyed the read even if it didn't quite reach the heights of The Sullen Sky Mystery and Shadow on the Wall. It's easy to see why Bailey was considered as one of the leading lights of (British) detective fiction and reminded me to give the short Reggie Fortune stories a shot.
Geplaatst door TomCat on 3/20/2014