Actors and their Demons

Back in December, I asked a mixed group of clued-up enthusiasts, well-read scholars and zealous collectors to recommend me a few good American detective writers, and they were unanimous in their nomination of Patrick Quentin – one of the collective pennames of a collaborative writing team whose output was of prodigious value to the genre. My enquiry also spawned quite a tail of comments discussing the participating members and showed how intricate the inner workings of the team was. I shall therefore not attempt to shoehorn all that information into a short biography, but refer you to their page on the GADwiki.
As a ferocious reader of detective stories, I wasn't completely unaware of their existence – having already read S.S. Murder (1933), The Grindle Nightmare (1935) and Death's Old Sweet Song (1946), but was only impressed by one of them (their take on the shipboard setting was marvelous). Nonetheless, this false start did not deter me in my newly made resolution to start reacquainting myself with their work, especially now that I was equipped with a better understanding of their work. You see, I put a lot of stock in the opinions expressed by the group I consulted and their exuberance was highly contagious. This resulted in a feverish itch to start ordering their suggestions left and right, but managed to restrain myself by showing firmness of mind and fortitude!
Well, OK... that's not exactly true. There were just too many outstanding orders at the time, but hey, it's a convenient excuse to delude one self into believing one possesses traces of self-restraint and must be properly rewarded for cultivating such a virtues characteristic. One of the rewards came a few days ago, when I finally had an opportunity to dig into the second book from the Peter Duluth series.
Yeah, it's a never-ending cycle from which no escape is possible. 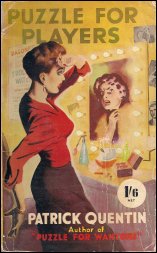 Puzzle for Players (1938) appears to be an immediate sequel to its predecessor, Puzzle for Fools (1936), in which Peter Duluth was recovering from a bout of alcoholism in a disquieted sanatorium, where he assisted Dr. Lenz in apprehending a devious killer who left his victims tied-up in straightjackets. Having survived that dark abyss, his next step in his rehabilitation process is staging a big comeback as a theatrical producer. Lady Fortune seems to be casting an auspicious smile at him in this endeavour, as he was successful in assembling a talented cast of actors and acquired an excellent play to produce, but his luck is stopped dead in its track when he learns that the stage for his return is at the old Dagonet.
The Dagonet is a decrepit, old theatre with a dismaying reputation of being jinxed and where the disembodied reflection of a young woman, who hanged herself there a few decades earlier, haunts the dressing rooms, but credulous superstition and ghostly backstage visitations are only an ill omen of things to come. Nearly everyone is struggling with his own demons, but when a couple of unlikable characters turn up, who try to worm their way into the production, and the first body drops in on the rehearsals, it's clear that someone is giving them another demon to fight against – and this one's a lot more tangible!
This is an excellent mystery that does a first class job at balancing a superb plot with an exploration of well-drawn characters, without falling into the modernist hack-trap of wallowing in angst and misery, and the issues they have to face are actually tightly woven into the plot – and the final scene provides a powerful dénouement.
Puzzle for Players is a novel that reminded me why I love reading these old-fashioned detective stories.
Geplaatst door TomCat on 3/27/2011