The Mystery of the Burnt Cottage (1943) by Enid Blyton

Last year, I reviewed the eighth title in Enid Blyton's The Five Find-Outers and Dog series, The Mystery of the Invisible Thief (1950), which is a juvenile mystery aimed at children between 8-12, but has a plot drenched in the traditions of the pure, Golden Age detective story and scrupulously observed the rules of fair play – even turning the red herrings into clues once you realize they're red herrings. A schoolbook example of how to plant clues and red herrings! 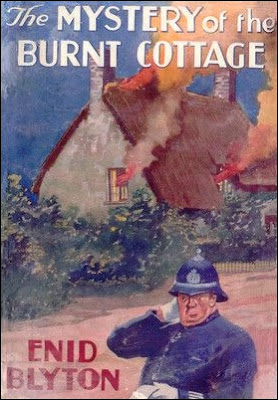 Naturally, older or more seasoned mystery readers will immediately peer through the veil of intrigue, but that doesn't take away from the fact that The Mystery of the Invisible Thief is a technical achievement in plot construction. A plot that must have surprised and impressed its intended audience. So, as a fan of the simon-pure jigsaw-puzzle detective story, I intended to pay a second visit to this series. Just to admire Blyton's putting together a fair and sound plot.

My fellow crime fiction addict, "JJ" of The Invisible Event, was the one who pointed my attention to this series and he posted a glowing review of the "exceptionally promising" debut of The Five Find-Outers and Dog.

The Mystery of the Burnt Cottage (1943) begins on a dark April night, in the village of Peterswood, when the titular cottage of Mr. Hick is set ablaze.

The cottage is old, half-timbered and thatched with a straw-roof that had been converted into a workroom, where Mr. Hick kept valuable papers worth "thousands of pounds," which impelled Mr. Hick to dart towards to the burning workroom – getting pulled back by three people while screaming "my papers" and "get them out, get them out." A fire expert from the insurance company determined that petrol had been used to torch the cottage. This was a case of arson!

Peterswood is a small, quiet village in the English countryside where Larry, Daisy, Pip and Bet live. Larry is the oldest of the group and Daisy's older brother. Bet is the baby of the group, just eight years old, who's often teased by her brother, Pip. Just around the time of the fire, a plump, well-dressed boy moved into the village with his jet-black Scottish Terrier, Buster. The name of this initially unpopular, self-satisfied boy is Frederick Algernon Trotteville and his ingratiation into “the little company of four friends” is the high-mark of the novel.

I mentioned in my review of The Mystery of the Invisible Thief that the antics of the children were very cartoon-like and how their pestering of Constable Theophilus Goon kind of reminded me of The Exploits of Quick and Flupke, but here the children were surprisingly realistically characterized – even showing how mean-spirited they can be. Frederick is christened "Fatty" on account of his size and initials. He had already been "Tubby" and "Sausage" at school and now he would be "Fatty." 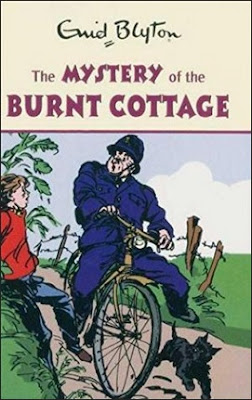 In his own review, JJ pointed out the obvious subtext of Fatty being emotionally neglected by his parents. Fatty can do whatever he want, wherever he want and whenever he want. There's no parental oversize. Larry remarked Fatty has "so much pocket-money he doesn't know what to do with it" and there was a rather sad scene where Fatty was eagerly lapping up the attention Pip's mother was giving him. This is surprisingly dark, if you ask me!

Fatty bonds with Larry, Daisy, Pip and Bet when they form a detective-club to find out who burned down Mr. Hick's cottage and destroyed the valuable papers. Bets comes up with the name when Larry explains to her what a detective is ("oh, a find-outer").

The Mystery of the Invisible Thief has many features of the Intuitionist School of G.K. Chesterton and John Dickson Carr with a seemingly impossible disappearance, a bizarre clue, disguised red herrings and the kids are even friends with Inspector Jenks – who's the antithesis of Constable Goon. On the other hand, The Mystery of the Burnt Cottage is firmly rooted in the traditions of the Realist School of Freeman Wills Crofts and John Rhode. A good portion of their investigation consists of trying to find the person who left rubber-soled footprints, with criss-cross markings, in a muddy ditch in the garden of Mr. Hick's garden and "a bit of grey flannel" from a suit caught on a thorn. This puts them on the trail of a tramp who was one of the many people in the garden on the night of the fire. And they discover that there were "a lot of quarrels and upsets on the day of the fire."

Mr. Hick had "a fine old quarrel" with his man-servant, Horace Peeks, who was fired on the spot, but had he set fire to the cottage as revenge? Peeks has been secretly dating a fellow servant, Lily, who still works for Mr. Hicks and uses the Five Find-Outers to post a warning letter to Peeks. Mrs. Minns is the talkative housekeeper of Mr. Hick and is constantly yelled at by her employer about her cats or letting the children into his kitchen. Finally, there's a scholar obsessed with old documents, Mr. Smellie, who had an argument with Mr. Hick over certain papers.

Unfortunately, the plot and clueing were uninspired, workmanlike and lacked genuine fair play.

The footprints in The Mystery of the Invisible Thief was a clever, tell-all clue presented as a red herring, but here it was simply a question of tracking down the person who owned a pair of rubber-soled shoes with criss-cross markings, which didn't even seem to matter in the end – because the arsonist made a stupid slip of the tongue. Fatty noticed. Same story with the piece of cloth. More annoyingly, you never really get an opportunity to break the alibi, because you're told about a certain location when the alibi-trick is explained. Very unfair. However, you don't need these clues to figure out who or why.

All in all, The Mystery of the Burnt Cottage is not as good a detective story as The Mystery of the Invisible Thief, but serves its purpose as an introduction to The Five Find-Outers and Dog. So a good, but imperfect, series debut that will not deter me from exploring this series further. The Mystery of the Pantomime Cat (1949) and The Mystery of Holly Lane (1953) sound promising!
Geplaatst door TomCat on 5/14/2019