Hideo Yokoyama worked as an investigative reporter for Jōmō Shimbun, a daily newspaper based in Gunma prefecture, but, in the late nineties, he turned to writing fiction, dabbling in numerous genres, ranging from manga stories and children's books to novels based on real-life events – peppered with a good dose of detective-and police novels and short stories. Yokoyama debuted with a collection of police stories, entitled Kage no kisetsu (Season of Shadows, 1998), which earned him the Seicho Matsumoto Prize. More prizes would follow! 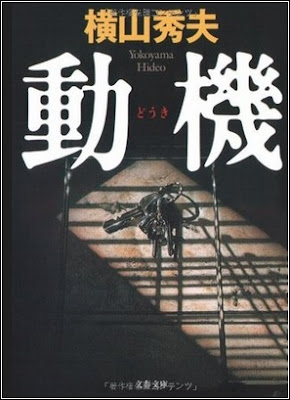 "Dōki" ("Motive") was awarded with the Mystery Writers of Japan Award for Best Short Story in 2000 and an English translation was published in the May, 2008, issue of Ellery Queen's Mystery Magazine.

This short story came to my attention when I read a brief, but glowing, review written by Mike Grost. He described it as a perfectly harmoniously story with "a solidly constructed puzzle," realistic characterization and an inside look at the inner workings of a police station, which all interact with each other in "a logical and ingenious fashion." I couldn't agree more! "Motive" is pretty much a classical, Ellery Queen-style short detective story dressed up as a contemporary police procedural. And it worked!

Superintendent Kaise Masayuki, of the Police Affairs Department, proposed and helped implementing "a new system aimed at preventing the loss of police IDs."

Normally, a police officer carried his ID notebook during off-duty hours, but under the new regulations, the head of each section was entrusted with safekeeping the ID notebooks when an officer went home – locking them away in a storage safe at the police station. Kaise had to overcome strong opposition within the ranks of Criminal Investigation Department and his reputation, as a second generation policeman, was tied to this plan. And then the unthinkable happened.

U Station had been storing ID notebooks by floors. The first floor housed the Police Affairs Section and Traffic Section, which is where thirty ID notebooks vanished from the locked storage safe over night! There are two entrances to the station, back and front, but nobody could have entered without being seen by the night-duty officers.

So the theft of thirty ID notebooks from a police station is an "unprecedented scandal" and Kaise is given only two days to hold an internal investigation, during which he has to find the culprit and retrieve the notebooks or else they have to face public in shame – finding the well-hidden motive is the key to finding both the thief and the notebooks. The motive is neatly tied to the characters populating the U station and the culture, as well as the regulations, of the Japanese police. Just as neat was Yokoyama's take on the false solution. Kaise figures out who and why, but there was an extra layer to the motive he initially had not foreseen.

So, in summation, Yokoyama's "Motive" is prove that the modern-day police procedural can function, or double, as traditional detective story with a good plot, characterization and a simple, but effective, twist in its tail. Highly recommended!
Geplaatst door TomCat on 5/10/2019