Last year, my fellow locked room enthusiast JJ, of The Invisible Event, posted an installment on his blog of "Adventures in Self-Publishing," a series bravely tackling self-published detective novels, novellas and short stories, which introduced me to the work of Robert Innes – a mystery writer specialized in impossible crime fiction. So that earned him a top spot on my list of persons of interest. 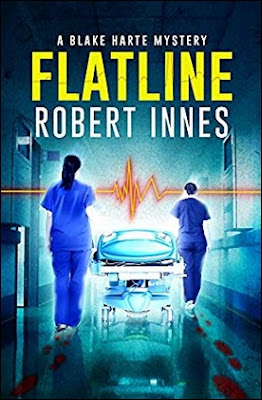 As of this writing, Innes has penned nine novellas about his series-character, Detective-Sergeant Blake Harte, who transferred in Untouchable (2016) from Manchester to the quiet, picturesque village of Harmschapel. But as Sherlock Holmes and Midsomer Murders has learned us, "the lowest and vilest alleys in London" do not present "a more dreadful record of sin" than does "the smiling and beautiful countryside." Harmschapel proved to be a hotbed for seemingly impossible murders.

JJ had cautioned me to read the series in chronological order, because the later stories refer back to the murderers from previous cases, but also warned that Untouchable would probably infuriate me beyond all measure – which is why it took me so long to get around to this series. I had no idea where to begin. So I finally decided to just pick a title with the most intriguing-sounding premise and impossible problem.

Flatline (2018) is the sixth novella in the series and D.S. Blake Harte is hospitalized and scheduled to go under the knife to have his appendix removed, but something dark is brooding in the staff rooms and corridors of Clackton General.

Exactly a year ago, Doctor Joe Tilsley and Nurse Kelsey Richards, who are dating, accidentally killed a young woman, Lucy Pennock, when they struck her with their car on a dark, rainy country road. Joe convinced Kelsey they should get out of there in order to protect their careers, but the death of Lucy weighs very heavy on Kelsey's conscience, which naturally puts a strain on their relationship. She becomes incredibly suspicious and slightly paranoid when D.S. Harte is hospitalized, because she found out he's "an extremely talented officer" behind "the solving of some truly baffling cases," but worst of all, Harte is the police officer in charge of the investigation into a deadly hit-and-run – one which happened exactly a year ago! But the worst is yet to come.

Kelsey receives a disturbing video message from someone wearing a surgical mask and cap, who identifies himself as The Watcher, warning Kelsey that the time has come to pay for the innocent life that had been so cruelly snatched away. This is followed by the bells of Big Ben booming from the tannoy system in the middle of the night and sinister phone call from The Watcher ending with "the long, monotonous tone of a flatline." Finally, there's the murder.

Dr. Joe Tilsley enters one of the two elevators in the hospital on the tenth floor and gets stuck on his way down, between the eight and seventh floor, which stays there for twenty-five minutes. When they finally opened the elevator doors, Dr. Tilsey is lying on the floor. And according to the physical evidence, he had been drowned in a bone dry elevator during those twenty-five lonely minutes when he had been trapped inside. 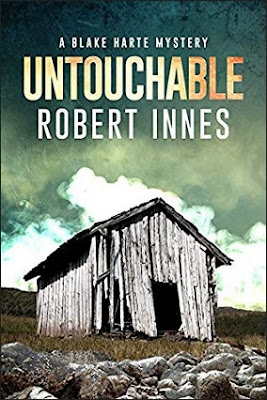 So here you have, what's undoubtedly, an intriguing premise for an impossible crime, but the story turned out to be a mixed bag of tricks. Let me begin with what I liked about it.

The locked room-trick found a new variation on an old principle of the impossible crime story often employed by such luminaries as John Dickson Carr, Edward D. Hoch and Paul Halter. You have to wonder why nobody else had come up with this idea before and miraculous drowning in the closed elevator was strengthened by the cussedness of all things general. A well-done impossible crime with a Carrian touch. The second thing I liked was the presence of a rival-detective, Sergeant Gardiner, who has been after Harte's position ever since he arrived in Harmschapel and provides the story with a ridiculous false solution, which is exactly what I expected from a rival-detective – because the Western detective story needs more Simon Brimmer's and Superintendent Akechi's. They're simply fun.

On the other hand, I hated how Harte's private life intruded upon the story. I mean, this is supposed to be a dark, brooding detective story with an elusive figure dressed as a surgeon stalking a doctor and a nurse in the corridors of the hospital and apparently leaving behind a body in a locked elevator. But the flow of this story is interrupted several times so that Harte can argue with his boyfriend about him always working or discharging himself from hospital against the advice of the doctors.

This is exactly what I hate about so many modern police procedurals. Not to mention that this came at the cost of at least three characters who needed a little more fleshing out.

Dr. Joe Tilsley is pretty much a non-entity and only there to provide a corpse for the story and a motive for the murderer, while Nurse Kelsey is a typical woman-in-peril who gets unburdened when a deus ex machine gave a new explanation for the hit-and-run. So not very original, but could have been more than it was if it was shown how that fateful night changed their relationship. The two already were an interesting contrast of each other. But the character who really got the short end of the stick was the murderer.

If the reader had been told what made the murderer tick, it would have strengthened the locked room-trick even more, because the murderer's personality and state-of-mind is integral to the murder. Innes could have gotten away with this, because he had dragged a good red herring across the trail to divert your attention away from this person.

So, all in all, Flatline is an uneven detective story with some good ideas, but clings too much to the conventions of the modern, British police procedural and allowed the personal life of the police-detective to intrude upon the story – disrupting and eventually breaking my immersion. However, I will not give up on this series and try one or two more. Ripples (2017) and Atmosphere (2018) have fascinating-sounding premises for an impossible crime story.

Well, this is the third mixed review in a row, but I'll try to pick something good for my next read. Fingers cross!
Geplaatst door TomCat on 5/02/2019