The Link in Between

"After all, most people... when confronted with a case of murder, have little but their knowledge of detective stories to guide them."
- Malcolm Warren (C.H.B. Kitchin's Death of My Aunt, 1929)

Over the past six months, I reviewed a brace of mystery novels by Leo Bruce, Nothing Like Blood (1962) and Death at St. Asprey's School (1967), but they were about his secondary detective-character, Carolus Deene, who never reached the same heights as his original creation – a former village constable, turned private-investigator, named Sgt. Beef.

The boorish, beer-chugging and dart-loving sergeant is a personal favorite of mine, but Beef only appeared in eight novels and a dozen, or so, short stories. It's one of those great series that was too short-lived. Luckily, I still had two full-length mystery novels from this series residing on the mountainous region of my TBR-pile. So after two very uneven detective stories from the Deene series, I decided to eliminate one of the remaining Beef novels from my seemingly never-ending list of unread detective stories. 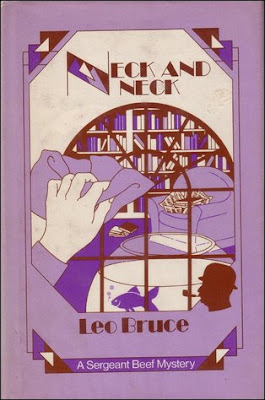 Neck and Neck (1951) is the seventh, penultimate, entry in this series and the plot offers a personal problem for the serious, long-suffering narrator, Lionel Townsend, who regularly gets ragged on by Sgt. Beef for his dearth of literary success or lack of confidence in his ability – which is why he has "to play second fiddle to all these other clever detectives."

Or so the sergeant assumes. But his personal biographer confides in the reader that he could no longer blind himself "to the fact that Beef was a genius." Townsend had known him first "as a heavy-footed policeman," blunt and boorish, whose methods seemed outwardly slapdash, but he had "prevailed too often to leave any doubt about his really profound cleverness." Now he wants Beef to apply his uncouth methods to clear up the murky circumstances surrounding the sudden passing of his favorite aunt.

The story opens with an urgent telegram from Townsend's brother, Vincent, who appeared previously in Case with Rings and Ropes (1940). It informs him that their "Aunt Aurora died suddenly this afternoon," but the telegram is quickly followed by a telephone call, in which Vincent shakily tells his brother that the doctor refuses to sign a death certificate and a police doctor is now on the case. There were also several policemen at the home of their aunt.

Apparently, Aunt Aurora "felt terribly ill just after lunch," excused herself, but "by tea-time she was dead," which did not sit well with her doctor and he called in the police – who shared his suspicion and an investigation was started – eventually revealing "a large quantity of morphia" in her system. So she was undoubtedly murdered, but the only viable motive to kill this beloved woman was her money.

The bulk of her money was divided between Lionel and Vincent, while a distant cousin, Hilton Gupp, had been cut out of her will. This came as both a surprise and shock to Gupp, because he really needed the money. However, Gupp has an apparently unshakable alibi. Some of the other beneficiaries included a thousand pounds for the Misses Graves, "Aunt Aurora's great friends," who were living well above their means and the local vicar, obsessed with the restoration of church murals, for which Aunt Aurora left five hundred pounds to the St. Luke's Restoration Fund.

So Townsend decides to call in Beef and this gives Bruce an opportunity to do a bit of knocking on the fourth wall. Vincent reproachfully remarks how surprise he is at his brother for trying "to make a detective-story-fan’s holiday out of Aunt Aurora's death" and, sarcastically, added that "it will make an excellent novel." After all, Beef usually get to the bottom of it. 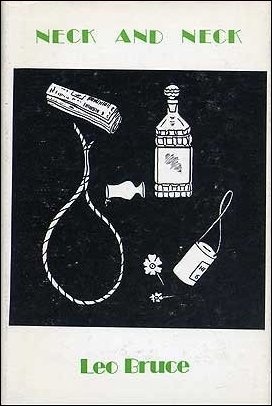 After his arrival, Sgt. Beef approaches the case with his brash oafishness and blunt questions. For example, he asks the family solicitor, after the funeral, in the presence of everyone else how money "there was in the kitty" and hinting he may need "a new biographer in any case" – since Townsend is as much as suspect as anyone else. It would not be the first time the narrator turned out to be the murderer. However, where Beef genuinely shines in this outing is as the only person to notice an obscure link between the poisoning of Aunt Aurora and "a little affair in the Cotswolds."

Before he even appeared in the case, Beef told Townsend he was working on a second case: an unpleasant bibliophile, collector and publisher, Edwin Ridley, was found hanging from a beam in his gloomy home. At first glance, it seemed to be a case of suicide and this worried his brother, a clergyman, because Ridley had taken out a large insurance and this was supposed to go into a trust fund for the children of his clergyman brother – which would not be paid out if it turned out that he taken his own life.

So the Reverend Alfred Ridley engaged the services of Beef, but it was the police who figured out the publisher was strangled first and then hung up on a rope.

There are more than enough potential suspects: Ridley used his small publishing house to wrench money from aspiring authors by letting them share in the printing costs, but the result was usually no more than a handful of cheaply printed and badly bound volumes. This spelled the premature death of many literary careers. One of these young writers, named Greenleaf, attempted to kill himself over such a "gag" and this makes him an obvious suspect.

But that's not all: the secretary of the victim discovers someone has been "monkeying with one or two of the more valuable books" from his late employer’s collection.

So there are more than enough potential motives to go around on this second investigation and Beef suggests Townsend makes "one book of the two of them" by letting both cases run neck and neck. Having parallel investigation, which eventually come together, is not an unusual approach to plotting a mystery novel (c.f. Robert van Gulik), but the hidden connection that links both murders is the crux of this plot – which made for niftily constructed plot.

Granted, the idea did not originate with Bruce, but Neck and Neck is a good, early example of this plot-device. Only thing that can be said against is that modern readers probably will not be entirely taken in by the trick. You can both guess and deduce the identity of the murderer and how the murders were connected. Nevertheless, Neck and Neck is a genuine detective story with a fine plot and nicely written, which effectively ended on a serious and human note. Overall, this made for a pretty good read from one of my favorite series of detective stories.