"One dumb-bell, Watson! Consider an athlete with one dumb-bell. Picture to yourself the unilateral development—the imminent danger of a spinal curvature. Shocking, Watson; shocking!"
- Sherlock Holmes (Sir Arthur Conan Doyle's The Valley of Fear, 1915)

From the very first paragraph, Case with Ropes and Rings (1940) plunges diligently in what readers have come to expect from Leo Bruce and Sgt. Beef: a high spirited, but intelligent, tongue-in-cheek treatment of the detective story, while obliterating the fourth wall.

"This isn't a love story... it's a detective novel," is one of the clues that Beef is more than aware of his status as a fictional character, but his long-suffering and under appreciated chronicler, Lionel Townsend, has become anxious about his job – as three months has passed since they had a case and Beef is starting to enquire about the book rights. 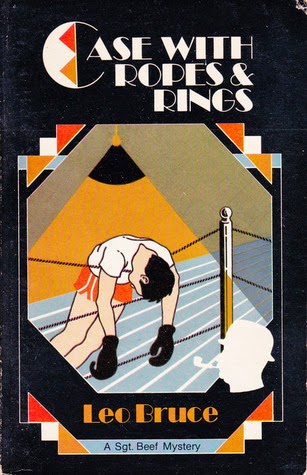 A headline in the Daily Dose finally spurs Beef into action. Lord Alan Foulkes, second son of the Marquess of Edenbridge, who was being educated at the prestigious Penhurst School, was found hanging from a beam in the gymnasium on the morning after having won the School Heavyweight Boxing Championship. Coincidently, Townsend has a brother, Vincent, who teaches at Penhurst, but they've never been particular close and Lionel has to absorb some backhanded abuse over the course of the investigation. Like when his brother suggested that Beef should've approached someone with a genuine gift for writing prose, such as Aldous Huxley, which gave Beef a swelled ego.

The first part of Case with Ropes and Rings follows Beef and Townsend around Penhurst, as the former (poorly) pretends to be the temporary School Porter, but the "bludgeoning method" of Beef doesn't make it easy on the formal-minded Townsend – and neither do the students give him a break. I particularly liked the scene with the boy asking "Ticks," which is his nickname for Townsend, if they are still on the old game and follows it up with:

"The detective racket... you're both nosing round after someone to pin a crime on, aren't you? God, how that sort of thing bores me! All these fearful women writers and people like you, working out dreary crimes for half-wits to read about. Doesn't it strike you as degrading?"

Well, I never! And as Townsend said, "one can scarcely expect schoolboys to appreciate the subtlety and depth of modern detective fiction" and one has "only to quite the name of Miss Sayers to remind you of what this genre has already produced." This all sounds perhaps more fun than it is, but there's a well thought out, expertly knotted plot at the heart of the story and an abundance of suspects that are being questioned – which gives room to the reader for a spot of theory building.

The second portion of the plot deals with an identical death in Camden Town gymnasium and the background stands in stark contrast with the supposed suicide of Alan in a prestigious bastion of knowledge and education. A young and professional boxer, Stanley Beecher, was found swinging from the rafters, but it has handled as a homicide as the case is surrounded with all the "paraphernalia of low life" – from criminal associates to ties to Spanish Nationalists and the aftermath of the Spanish Civil War.

It's an unlikely combination of characters, events and background to produce two identical deaths, but Bruce, evidently, knew his way around a plot and brings everything together coherently. I'd place Case with Ropes and Rings alongside the best in this series, which includes Case for Three Detectives (1936) and Case for Sergeant Beef (1947). Needless to say, I quite enjoyed this one.

Bruce was a mystery reader's mystery writer and you'll probably enjoy the Sgt. Beef novels the most, if you have more than a passing acquaintance with the Golden Age detective story. Bruce is the kind of mystery writer you grab when you've come to the starling realization that you've gone through every Agatha Christie novel, while burning through the remaining Crime Queens like an inquisitor in a medieval witch hunt, and your supply of yet to be read mysteries by John Dickson Carr and Nicholas Blake are dwindling. That's the excuse moment, you can start adding Leo Bruce to your wish lists and TBR piles.

Finally, the opening was quote was the only sports-related mystery quote I could think of/find.
Geplaatst door TomCat on 1/24/2015