"It is an old maxim of mine that when you have excluded the impossible, whatever remains, however improbable, must be the truth."
-  Sherlock Holmes ("The Adventure of the Beryl Coronet," from The Adventures of Sherlock Holmes, 1891)

This isn't going to be a third review in as many days, I'm not that fast, but an update with some vague, weekend musings thrown in. 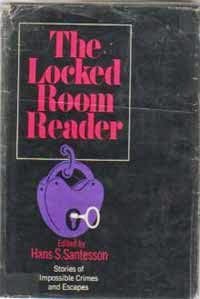 First of all, I finally put the finishing touch to the update of the largest post on this blog, "My Favorite Locked Room Mysteries, Part I: The Novels," which is an 8-page counting list of what I consider to be some of the finest impossible crime novels in existence. This post will undoubtedly continue to expand further, but this thorough rewrite of the list will buy me a year or two of neglect – before another rigorous update is in order. Now it looks neat, tidy and ordered again.

I'll be redrafting, rewriting and updating the sequel to that list, "My Favorite Locked Room Mysteries, Part II: Short Stories and Novellas," when I have reached the ending of The Black Lizard Big Book of Locked-Room Mysteries (2014). The first two reviews from that monster anthology can be found here and here. I'll probably squeeze in a review of Case Closed, before returning to the Black Lizard book. There will also be reviews of regular mystery novels interspersed with the ones tackling Otto Penzler's anthology.

The blog for crime-fiction reviews and news, Past Offenses, fills us in on the third series of the BBC's Father Brown and a rundown of the upcoming episodes reminded me why I passed on the previous seasons. Well, the post warns to expect "the occasional squeal of anguish from the G.K. Chesterton purists," but the original stories were set in the early decades of the previous century and their author died in 1936 – yet the series is (apparently) steeped in 1950s nostalgia!

I hear you say, "Oh, that’s just a change in setting," but a glance at the episode description proves the snooty purist correct. "The Invisible Man," from The Innocence of Father Brown (1911), is one of those over anthologized, but landmark, stories in the impossible crime genre and this is what they made of it,"the circus brings death to Kembleford when a clown is murdered." What? This is going to be The Mrs. Bradley Mysteries adaptation of The Rising of the Moon (1945) all over again, isn't it? Oh, well, there's at least one detective fanboy who'll be glad to see another clown dead, if only a fictional one.

On the death bed of 2014, I posted "The Renaissance Era of Detective Fiction," which was a response to crime writer and fellow mystery enthusiast, Martin Edwards, asking an important question on his blog – why are contemporary readers taking note of Golden Age detective stories again? I compiled a rather long, rambling answer, but something occurred to me later that should have been part of the post. Surely, I haven't been the only one who left a bookstore, within a minute of entering, because of the usual stock of contemporary crime novels – which gave since the early 2000s an expanding group of customers to independent publishers, secondhand book dealers and a growing interest for public domain work. We're now as far removed from the year 2000 as from 2030 and the clock is ticking on the expiration date of a lot of copyrighted works from the Golden Age. So why not, from a publishers point of view, make some bucks out of the best works and writers from the Golden Age, before Gutenberg starts making them available in the decades ahead.

Finally, I deleted the badly written, overlong introduction to the updated list of favorite locked room mysteries and will probably rewrite it as a filler post entitled, "Why I Love Impossible Crime Stories." Hey, I promised activity would (eventually) resume, which, by the way, has been going on since September, 2014, showing an ascending line in blog activity – one post at a time. Well, hopefully, I'll have a quick review up tomorrow.