A Room With a Story

"There was, too, not only the past, but a sinister present. The shadow of murder and a murderer haunted the house."
- Arthur Hastings (Curtain: Poirot's Last Case, 1975)

Wadsworth Camp is as obscure as most of the names listed on the Golden Age of Detection Wiki or mentioned in Locked Room Murders and Others Impossible Crimes (1991), but cross-searching them placed two novels by Camp on my wishlist – one of them being The Abandoned Room (1917).

The Abandoned Room was published in the same year as the United States' entry into World War I, during which Camp served as a war correspondent and probably had a brush with mustard gas. Camp most likely wrote the book before the war, but didn't feel the need at that moment to include any reference to the armed conflict that the world was entrenched in at the time. It strangely enough feels like reading a thoroughly British country house mystery as perceived by R.M. James. 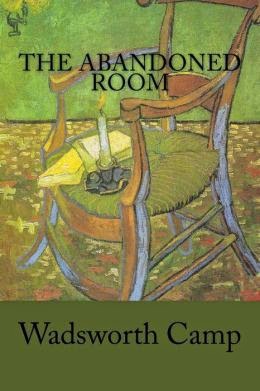 Spook Central would've been a good name for the ancestral home of Silas Blackburn, called The Cedars, which he delivered back to the "swift, obliterating fingers of time." A thick and dark forest with patches of stagnant lakes surrounds the home. There's a disused, overgrown family graveyard on the rundown grounds and at the core is the abandoned bedroom, in which many generations of Blackburn's died anguish – usually of a head injury. Silas' great grandfather had been brought to that room from a "Revolutionary skirmish" and his father picked the room to shoot himself in, which are just two of the cozy family stories. However, Silas is afraid that his cousins, Katherine and Bobby, might want to prevent him from changing his will and takes refuge in the old bedroom. Both doors are locked from the inside. And, predictably, Silas is found murdered in his bed, but here is where it gets weird.

Robert "Bobby" Blackburn was on his way to his uncle on the evening of the murder, but wakes up the following morning in an abandoned, ramshackle house well-nigh The Cedars – without shoes or his most recent memories. The possible motive of securing an inheritance and a sudden memory gap makes him the prime suspect for the county detective, Howell, which is strengthened with a footprint matching his and a monogrammed handkerchief found underneath the bed. Yes. There are moments when the story shows its age. However, you probably won't mind them as much once the abandoned room has you in its spell ("I'm possessed by this house and can never leave it again!").

Anyhow, the seemingly impossibilities continue to pile on at The Cedars: Silas' body is moved mysteriously inside the death room, which becomes soon the scene of an identical and equally baffling murder. And there are, of course, more suspects to consider. Why was Katherine always the first to notice there was something happening in that room? What is the real purpose of Carlos Paredes' presence at The Cedars? Why is Dr. Groom so keen to point out the haunted history of the place and suggests they might be fighting the dead who resented the intrusion of the living? Surely, there must be something up with a butler named Jenkins! However, the main attraction remains the thick atmosphere and allusions to ghostly inhabitants of the grounds that is pulled over this story, which is really well played in the second half of the novel – and features another impossible situation or two.

Bobby wants to rifle the pockets of the second victim for important papers and the otherwise unoccupied room is being watched by Katherine, but the papers vanish practically in front of his eyes and upon touching the corpse he "felt death cease to be death" for a moment. I can imagine this particular scene could've impressed a very young and imaginative John Dickson Carr. These apparently supernatural crimes persist and they're used to great effect, but the problem is that they revolve around a gimmick that was out-of-date even by 1917 – as reasonable and convincing as it may have been brought. Camp gave a good explanation why it was missed, but I think he should've continued working on the implied solution that arose when everyone began to think "that the void between the living and dead had, indeed, been bridged." Again... Camp was evidently a master at the oldfangled art of presentation-and effect. What it lacked was an extra punch of originality (see: locked room solution) to push it as one of the early classics of the locked room sub-genre. Now The Abandoned Room only gives us bragging rights about how the Detective Story stole Camp away from the Ghost Yarn. So what do you think about that Dr. Crowe?

Finally, for those interested, the blog Bill Ectric's Place has compiled bits and pieces of information on Wadsworth Camp from around the web.
Geplaatst door TomCat on 8/24/2014