"A" is for Antique

"Have we ever... handled any murders for him before?"
- Lutie Beagle (Torrey Chanslor's Our First Murder, 1940).

Marcia Muller and Bill Pronzini are acclaimed crime-and mystery writers in their own right, creating the celebrated private-eyes Sharon McCone and the Nameless Detective, but their masterstroke came when they decided to merge their universes and throw everything together – even when the characters were a century apart (e.g. Beyond the Grave, 1986).

I have reviewed many of their collaborations on this blog, from Double (1984) to the recent Carpenter and Quincannon novels (The Bughouse Affair and The Spook Lights Affair, 2013), but a bulk of the exposure has gone to Pronzini's work. In my defense, Pronzini's contagious enthusiasm for fiction has formed a treacherous pool of quicksand, normally known as a bibliography, which is hard to escape from. And the abundance of locked room mysteries! You can't forgot about that. However, the end result is that I have only read two solo-works by Muller: The Tree of Death (1983) and The McCone Files (1995). So I decided it was about time to tackle a proper Sharon McCone novel and where better to start than at the beginning... 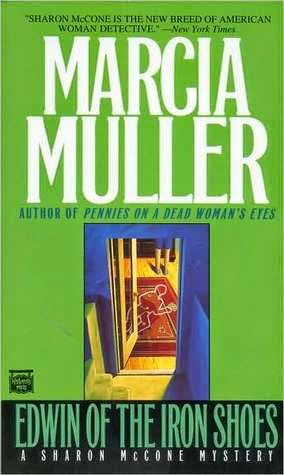 Edwin of the Iron Shoes (1977) was the debut of "the founding mother of the contemporary female hardboiled private eye," but the plot is very traditional and that's how I really prefer my private-eyes – not too hard boiled.

The epicenter of Edwin of the Iron Shoes is Salem Street, where the careworn buildings provide housing for a clutter of antique stores and junk shops, but, recently, their owners have been on the receiving end of vandalism mingled with arson. Intimidation that eventually culminates in murder of one of the shopkeepers. Joan Albritton owned a small shop, Joan's Unique Antique, which is where her body was found – stabbed with a bone-handled knife snatched from an open display case. The inoffensive antique dealer was a client of All Souls Cooperative, a legal firm to help the unfortunate ones in society, and they sick their staff investigator on her murderer.

Sharon McCone has more than enough leads to sort out and suspects to follow up on. Firstly, there's the possible connection between the acts of vandalism and an impending real-estate deal with a cold and vindictive mogul, Cara Insgall – which also attracted the attention of a shady bail bondsman, Ben Harmon. A character who's about as hand tame as Max Hook from the mystery stories by Craig Rice. Secondly, there are the suspects that are a lot closer to home. Oliver van Osten was one of Joan's antique dealers and more than willing to put his knowledge at McCone's disposal. Or Charlie Cornish, owner of the Junk Emporium across the street, who had a relationship with Joan and disapproved of her seeing Harmon. What's the role of the wood-carved little-boy mannequin, named Edwin, wearing ornate iron shoes?

Muller penned an ambitious first mystery novel that stands pleasantly closer to the works of the then (semi) retired generation of writers than the hardboiled private-eye Muller is associated with today, but hey, that's just my personal bias for pure detective stories rearing its ugly head again. Edwin of the Iron Shoes does reflect the talent Muller (and Pronzini) has for creating characters without sacrificing the plot, which is commendable, but my favorite part was when McCone spend the night at the crime-scene – where she had a brush with a night-time intruder after a vivid dream and probably had her first argument with a police lieutenant over the course of a murder enquiry. Or how McCone sneaked into places she wasn't suppose to be and how her theory was crushed when her handpicked murderer became another victim. The inevitable confrontation with the murderer got a smile, because, this being the first in the series, the training wheels were still on and McCone only had to fear for her life at knifepoint – instead of arguing over the barrel of a gun. What I'm trying to say is that characterization can be a wasted effort when I'm reading the book.

The only (minor) complaint I have is the identity of the murderer. I kept hoping it wasn't this person, because it was too easy, but absolutely forgivable for a debut novel. So, all in all, not a bad start of what blossomed into a successful series.
Geplaatst door TomCat on 8/29/2014