One of the many titles listed in Robert Adey's Locked Room Murders (1991) that has always fascinated me is a short story docketed as entry #1361, Thomas Narcejac's "L'orchideé rouge" ("The Red Orchid," 1947), which is part of a series of pastiches he wrote during the late '40s and were collected a decade later in Usurpation d'identity (Identity Theft, 1959) – published as by Boileau-Narcejac. "The Red Orchid" is, as you might expect from the title, a pastiche of Rex Stout's Nero Wolfe and Archie Goodwin. 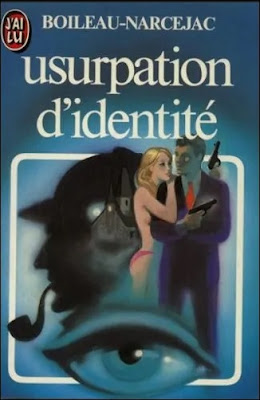 The story was originally translated into an English by Lawrence G. Blochman, published in the January, 1961, issue of Ellery Queen's Mystery Magazine, but a new translation was commissioned for its inclusion in The Misadventures of Nero Wolfe (2020; edited by Josh Pachter). Rebecca Jones previously translated Narcejac's "Le mystère des ballons" ("The Mystery of the Red Balloons," 1947) for The Misadventures of Ellery Queen (2018; edited by Pachter and Dale C. Andrews).

I'll come back to The Misadventures of Nero Wolfe some time later this year, but now, I want to concentrate on "The Red Orchid." A story that, peculiarly enough, gives Archie and Wolfe an impossible crime to annoy each other with. I believe the closest Stout ever came to the locked room genre was in Champagne for One (1958) and The Doorbell Rang (1965). But that combination is probably what attracted me to the story.

Isabella Tyndall is the niece of an inventor and savant, Sir Lawrence Tyndall, who has been experimenting in "absolute secrecy" with ultrasound and has developed "a simple machine that allows the user to stop engines from miles away," but, around the same time, the attacks began – a bullet grazed his head in the park and there was poison in his herbal tea. These attacks coincided with the disappearance from the house of a bottle of sherry, a ham and a Cheshire cheese. And worst of all, the press smells a story and the place is now "besieged by a crowd of journalists." Sir Lawrence can't work anymore and wants a private detective to clear up the case, but someone predicted Wolfe would refuse the case because he rarely goes out.

Nero Wolfe is "more sedentary than the Empire State Building" and has to be bribed and prepared, like an over-sized child, with a big fee, promise of food and a rare orchid. One of Sir Lawrence discoveries is a way to influence the development and coloring of flowers, which resulted in a red Coelogyne pandurata. Wolfe has tried for two years to breed one in red and refuses to believe it was done outside of his rooftop greenhouse.

Archie finally succeeds in getting Wolfe out of the house and on the road to an earning an easy fee, but when they arrive, the orchid has been stolen and the potato masher has disappeared. During the night, Archie discovers various members of the household, relatives and boarders, sneaking around the place and the next morning they have to break down the door of Sir Lawrence's bedroom – behind it they find his body. Sir Lawrence, clad in pajamas, lay collapsed against the wall with a disfigured face suggesting a nasty dose of poison. The way in which the locked room-trick worked was surprisingly inventive, even if it required a bit of luck, but something you would never associate with Stout. Same goes for the clueing, which was not always one of Stout's strong suits. But the way in which Archie and Wolfe tackled the case was typically Stout. Wolfe reasons the answer while laying in bed and tests Archie's patience when he uses him to test his deductions ("Listen, boss, I'm a patient guy, but..."). So, yeah, I enjoyed it. 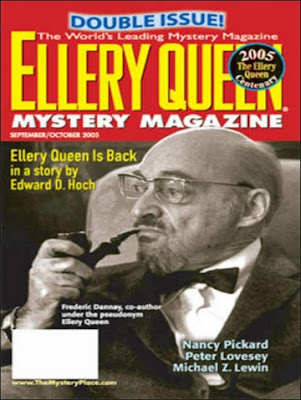 Well, since "The Red Orchid" is a pastiche, I decided to use it as an excuse to expend this review with two more pastiches that have been lingering on my to-be-read pile for ages.

Edward D. Hoch's "The Wrightsville Carnival" has only appeared in the Sep/Oct, 2005, issue of Ellery Queen's Mystery Magazine and brings an elderly Ellery Queen to an altered, modernized Wrightsville. The corner store now occupied the entire block and the local ice cream parlor was turned into a Starbucks, while many of the old inhabitants had either passed away or moved elsewhere.

Police Chief Anselm Newby made his debut in Ellery Queen's "The Death of Don Juan," collected in Queen's Full (1965), who recognizes Ellery and tells him about the new editor of the Wrightsville Record, Polly Watkins. Ellery learns through Polly about the town's bad boy, Sam Nation, who's the reason why Janice Collins left her husband and Polly had used the newspaper to hound him out of the town, but there was a baby and Janice put it up for adoption – which infuriated Sam when he found out. And demanded to know where his son was. Sam has returned to Wrightsville working as a roustabout at the carnival, which comes to the town every year in August.

So he naturally becomes the primary suspect when Janice is found bludgeoned to death in her home, but Ellery effortlessly deduces the correct solution and escapes the clutches of an enraged murderer with "only minor bruising."

Hoch's "The Wrightsville Carnival" has something curious in common with Narcejac's "The Red Orchid." Character-wise, the detectives echo their originals incarnations, but the plots are a little uncharacteristic. Stout barely touched the locked room mystery, but "The Red Orchid" has Wolfe solving an honest to God locked room murder. "The Wrightsville Carnival" lacked any of the usual Ellery Queen tropes. No dying, or coded, message. No ingenious false-solution or multi-faceted clues. Not even a challenge to the reader. Just an alibi that has be destroyed. It's not exactly an alibi-trick that will fool many seasoned and suspicious-minded armchair detective, but I suppose the novelty of this story comes from seeing Ellery interact with the modern, ever-changing world. And the many references to the original stories. 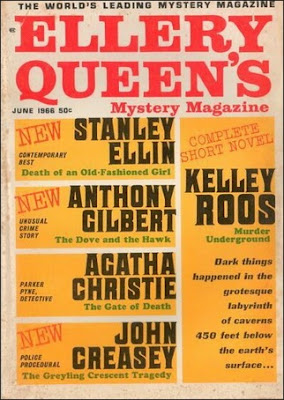 So a more than decent pastiche with some sense of continuity, but not even close to being one of Hoch's best detective stories.

The last of these three pastiches is a short-short by Arthur Porges, "In Compartment 813," which was originally published in the June, 1966, issue of Ellery Queen's Mystery Magazine and has a double-layered solution with the final twist being the true identity of one of the characters – somewhat reminiscent of John Dickson Carr's "The Gentleman from Paris" (collected in The Third Bullet, 1954). You can probably guess by the title of the story who's playing detective, but we'll pretend it's not Maurice Leblanc's Arsène Lupin.

The story opens with a young and an old man sharing Compartment 813, of the Cote d'Azur Express, when the old man, Monsieur Sernine, recognizes the younger man as the grandson of an old friend, Bertrand de Monsoreau. Sernine asks Bertrand to kill the time and tell him about the night he attended one of Baron Duclaux's dinner parties. During the party, Baron Duclaux showed his guests the Tiger's Heart, "a fabulous ruby," which he had just bought for two million francs. The ruby "was passed from hand to hand" and, all at once, "no one had the ruby." Nobody had left the room when the police arrived, but nobody had the ruby on them and it was not found anywhere in the room. The ruby had "utterly vanished."

Considering the short length of the story (barely 4 pages), I suspected the good old camouflage-trick with the ruby having been secreted in a glass of wine or hidden in the chandelier, but Porges came up with an unexpectedly different kind of solution. A good trick that would have been better had there been room to drop some clues and more hint. Yes, even in this short-short, Porges was able to foreshadow the solution. Porges was such a good and underrated mystery writer!
Geplaatst door TomCat on 7/13/2020